Chaos on Deponia Review – Juvenile Humor Through Mountains of Dialogue

It may seem like a progressively fading genre, but point-and-click adventure titles are something every gamer ought to experience at least once. These tend to be stories full of rich lore, interesting puzzle solving, and a wide range of humor to make you keep playing while encouraging players to go at their own pace and take it every minute detail the game has to offer. Developed by Daedalic Entertainment, Chaos on Deponia originally launched back in 2012 for PC and Linux, continuing the tale of oddball Rufus from the previous game, Deponia. I went into this game with no prior knowledge of the last entry but a profound interest in point-and-click style adventures, and to its credit Chaos on Deponia wastes no time filling me in on what I need to know to enjoy the game. The question, however, was whether or not the game was enjoyable at all.

Rufus is an oaf. He is arrogant, brash, destructive, and a smart mouth. These are not qualities new to a protagonist – in fact, many games these days require a hero show at least one of these traits to be appealing. When I was introduced to Rufus in the opening tutorial I found him somewhat amusing but held out hope that he would mature which, sadly, is not the case. Instead of being a lovable miscreant, Rufus comes across like the guy who made inappropriate jokes in gym class and thought he was hilarious rather than an underdog hero. The other characters of the game dislike him, to say the least, and while at first it makes him endearing, it’s quickly subverted by the fact he doesn’t care about the opinion of others. He’s a shameless annoyance, with his one redeeming moment coming in the early portion of the game where he has to save Goal from a situation he put her in.

“don’t assume you can breeze through the game without exercising that brain muscle of yours.”

Aesthetically, the game looks great. The fine details and sharp colors pop fantastically on screen in a modern comic book art style that feels well crafted and loved during production. Rufus will travel about his surroundings solving puzzles in classic point-and-click style; finding various objects to use in creative ways which must be discovered through dialogue menus and trial-and-error gameplay. The puzzles can be quite inventive and some early ones even pose a satisfying challenge: don’t assume you can breeze through the game without exercising that brain muscle of yours. 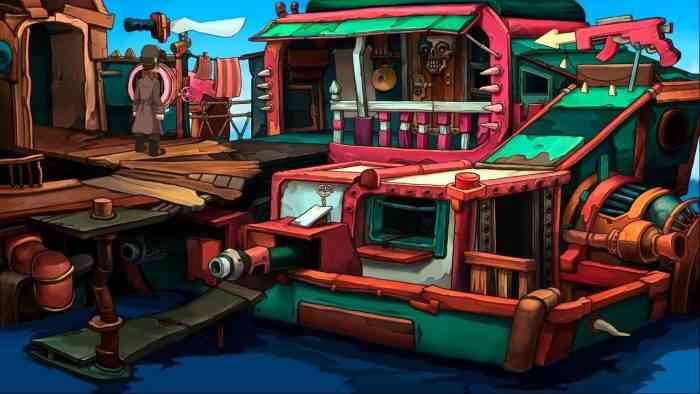 With so much detail going into the world both in appearance and narrative, the game bogs itself down in unnecessary excess: conversations and the number of dialogue options Rufus gets with each encounter can be exhausting. Point-and-clicks have always gone at their own pace but in some instances Rufus will have several minutes of dialogue with a single person before you learn what you need to know – and the world is filled with a number of people with their own quests and hints. Dialogue audio can be skipped to speed up the process but it doesn’t help when each person dumps vital exposition in their discussion.

“considering Rufus isn’t much of a likable character, it gets annoying to listen to him.”

This same problem also appears when solving certain puzzles, as apparent at the beginning of the game. Rufus is able to interact with objects in three different ways, and each interaction which is incorrect to further the story prompts two characters to have a discussion before you can try again. Rufus is able to attempt to use an item in each interactive location, look at the location, or interact with it directly. Pressing the wrong button will often force you to encounter more dialogue. This by no means is a new feature to the genre, but I haven’t encountered a game that lays the dialogue on so heavily, and considering Rufus isn’t much of a likable character, it gets annoying to listen to him.

Chaos on Deponia features a simple crafting system for solving puzzles as well, combining recovered items to enhance them as a necessary key to the problem. While it’s a new addition for the series, it doesn’t add enough to the game to be a stand-out feature, and consider the game has a spotty time with button detection across the plethora of interactive points on screen, adding more objects to use might not be the best choice. It tries to fix this by cycling through these points using the shoulder buttons, but it feels like a patch job as opposed to fixing the problem itself. 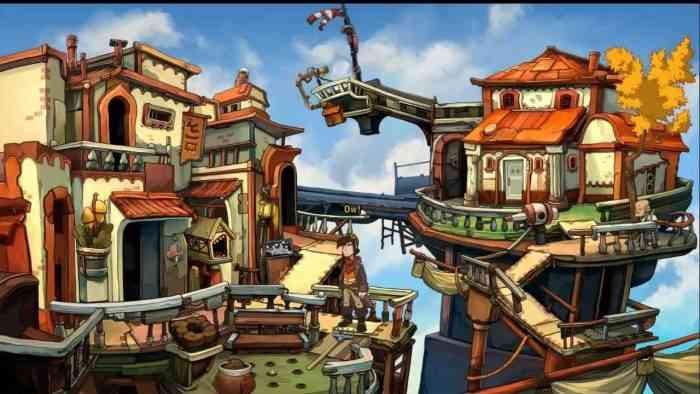 While Chaos on Deponia furthers the oddball adventures of Rufus and has its moments of entertaining humor and challenging puzzles, Rufus himself falls flat in an attempt to portray a plucky hero. The fact the rest of the cast don’t like him further makes me question why I should even try. With awkward button detection, exhaustive dialogue, and juvenile humor, Chaos of Deponia misses the mark of creating a captivating point-and-click and instead offers a slapstick experience that doesn’t take itself too seriously, which is a shame because it has the right elements of a successful game but it fumbles in crafting something useful. 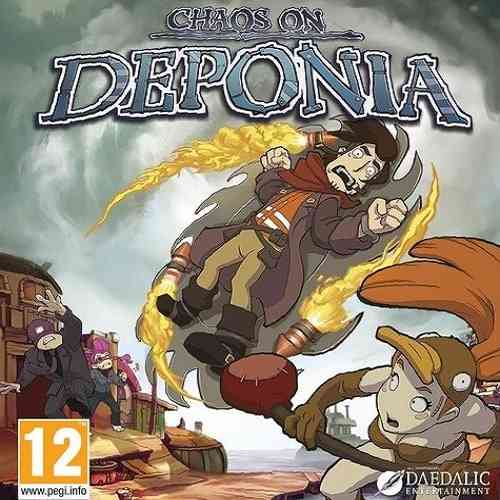 The Excavation of Hob’s Barrow, Horror Game, Coming to PC Later 2022
Next Okami HD Review – Can’t Fix What Isn’t Broken
Previous Aces of the Luftwaffe – Squadron Review – A Lesson in “Less is More”