CastleStorm Review – A Smorgasbord of Fun

Like many people, I loved playing flash games as a kid. Of the games I played, tower defense and tower destruction games were always my favorites. There’s an easily understood catharsis in sending explosives into the base of an enemy fortress and watching the whole thing collapse into rubble, and the strategy of preventing the same from happening to my own fortress just added to the experience. These things in mind, it came as no surprise that jumping into CastleStorm on Switch felt a bit like déjà vu. CastleStorm is a tower defense game in the truest sense, combining design aspects of numerous other tower defense games to form a full if unoriginal, experience.

Upon its initial release in 2013, the comparisons to Angry Birds were inevitable, and for good reason. The projectiles you fire at the enemy fortress (and enemies) have eerily similar powers, including exploding on impact, the ability to accelerate at a designated point after firing, and the ability to split one projectile into three at a designated point after firing. Not to say that Angry Birds was the first castle crasher to feature these powers, but it certainly popularized them. The castle storming mechanic (for which I can only assume the game is named) is practically identical to a number of flash games I played growing up. To be honest, I’m not much of a mobile gamer, so I’m unable to name a more recognizable game that features the mechanic. The one I played was called Epic War, and I was continuously reminded of it as I played CastleStorm. Unit types and gameplay were shockingly similar, featuring grunt warriors, archers, heavier warriors, healers, and others, which are summoned at a cost of mana/food and are supported by a ballista with special unlockable ammo types that must recharge after use. The similarities are too extensive to be written off as coincidence, and so it does lose points on originality. Fortunately, it does expand on these mechanics.

Choose Your Style of Play Wisely

The real joy of the gameplay comes in from the flexibility the player is allowed. Eventually, the player will have more unit types than they can use and will have to choose how they want to structure their defenses. Additionally, the player has total control over the structure and features of their castle. My personal strategy of simply spawning as many highly upgraded basic grunts as possible and overwhelming the enemy presents an excellent example of the give and take present in different playstyles. The more unit types and buffs you want to include in your army, the more rooms of your castle will have to be dedicated to offering those units and buffs. The more of these rooms you use, the less space you have for defending them. This means that my strategy of only using a single unit type meant I was limited militarily, but the unit had a low summoning cost, was cheap to upgrade (especially since I could totally focus on just the one unit), and I could defend its room behind layers of structural defenses. If I had wanted to fill my army with a huge variety of troops, I would have had to sacrifice my defenses, but I also would have been able to play focus more effort on the offensive play.

The game can be played in single player or player vs. player modes. The real draw of the single player is the campaign, where the player progresses through a humorous story, fighting to complete various goals. Maybe your army is on strike, so you have to defeat the enemy using only your ballista and magic; maybe a sheep is in the way of your ballista, so you have to rely on your troops. Your goal may be to capture the flag, to destroy the enemy fortress, or even simply to survive. The bizarre and wacky circumstances surrounding many of the battles are charming and kept the game fresh even once the gameplay began to feel repetitive. 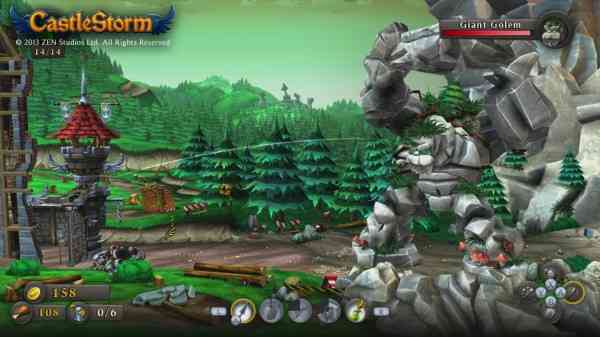 The repetition really began to wear me down once I got into the later parts of the campaign, though. Eventually, the humor and the theme changes weren’t enough to break up the monotony of completing the same challenges over and over. Once that issue had fully manifested itself, I decided to try out the multiplayer with a friend of mine, which served quite well to break up the monotony with a fresh supply of human unpredictability. All-in-all, the multiplayer was a great way to extend the game’s longevity.

CastleStorm does a good job of combining polished mechanics from other games with a decent script to form an entertaining game. It’s nothing spectacular, but it’s certainly fun. I sat down with it for about five hours the first day I played it and found myself eager to continue playing it the following day. That’s enough for me to give it a recommendation. $15 isn’t too bad a price if a little high. With that said, if you’re just looking for one play type, you may be satisfied saving your money and playing Angry Birds or Epic War. 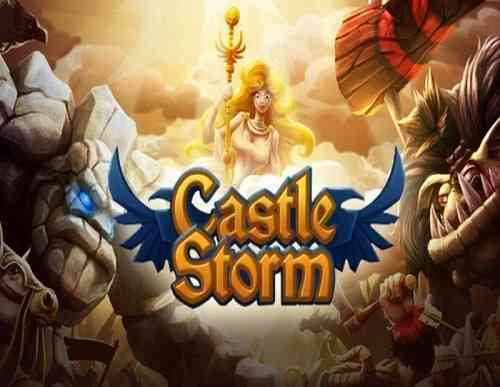