First released back in 2007 for the Nintendo Wii, Cat Daddy Games’ attraction filled title makes its way to the PlayStation VR. While the thrill of the experience is compounded with a headset on, Carnival Games still isn’t really that fun and the gulf in production value compared to other PSVR games is abundantly clear. Still, Carnival Games VR tosses in a few attractions that are a joy to play and one in particular that stands out from the rest.

The player is taken through the various sections of the carnival, like Cowpoke Corral and Wizard’s Walkway, by a boisterous guide whose over-the-top performances got annoying pretty quickly. You’re tasked with gaining prize tickets by playing the select unlocked attractions before going to purchase items from the gift shop that you can toy around with in the play area – simply by examining the models or tossing them at trampolines – or use to unlock more attractions and segments in the park. I quickly found out you can easily cheese the system by simply ending games quickly to get an automatic five tickets. Do this twenty times and you’re well on your way to unlocking all of the events in any given area. When I tried to actually play the games to get the top scores, it was rather frustrating as some attractions would have fairly easy 3-star targets – with higher star performances earning you more tickets – and others felt like you had to beat the dev scores!

“Although, its ticket based reward system is broken and a good number of games have inconsistent star requirements.”

Ring Toss is the most apparent example as I would hit six or seven on the trot and get measly rewards. Other games, like Alley Ball, were a bit too easy as you face opponents while aiming for holes. And others yet, like Golden Arm, are equally challenging and rewarding as you knock down golden milk jugs set-up in increasingly harder formations. It felt like every attraction I entered had the chance of being in any of the three categories in terms of difficulty and the requirement to get 3-stars. This inadvertently messes with the ticket system as great performances in one mode might only get you a single star and a handful of tickets while bad performances in another could have you swimming in rewards. 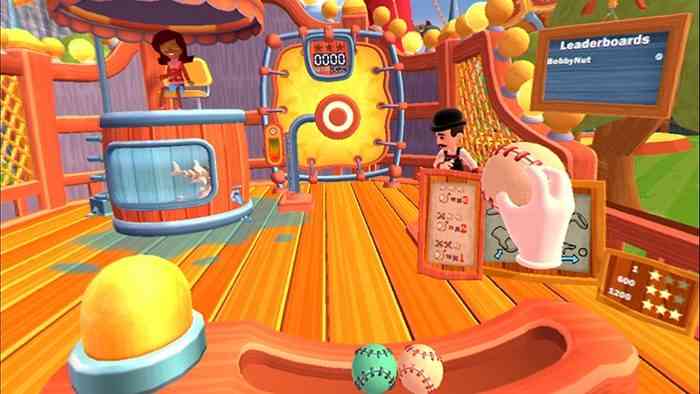 These issues fall by the wayside once you’ve unlocked all the games, which doesn’t take too long, as the focus thankfully goes to the attractions themselves. Among the dozen games, the stand out had to be Climbing Wall. While Crytek’s The Climb isn’t available for PlayStation VR, Carnival Games’ version scratched an itch I’d been dying to experience in virtual reality. The controls, as with the rest of the attractions, are easy to work as you move one hand after another grasping ropes, chains, and handles while racing the clock. Raising my hand to duck under a line of rope felt natural and red-colored handles that broke away after a period of time kept me on my toes. Unfortunately, it’s not an attraction you’d necessarily want to keep playing as I was too tired to attempt to beat my score after a few tries. 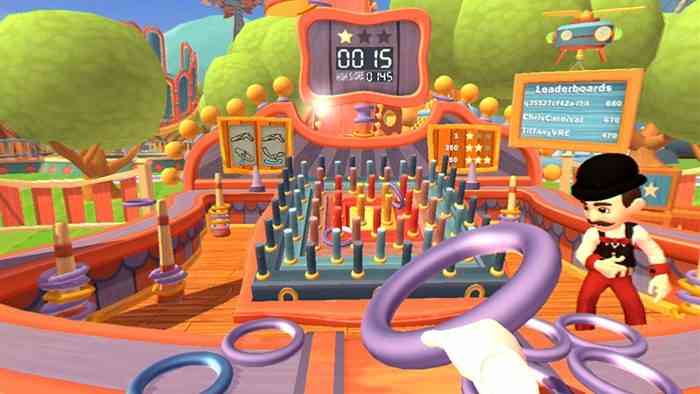 Carnival Games VR has a decent selection of attractions with a few standouts. Although, its ticket based reward system is broken and a good number of games have inconsistent star requirements. While Climbing Wall stands tall above the rest, there’s some fun to be had in games like Funnel Cake Stacker that tasks you to hold as many projectiles thrown at you with the two disks in your hands. There’s not much replay value here, and the production value won’t wow you, but it’s a passable VR experience that is held up by its main attraction. 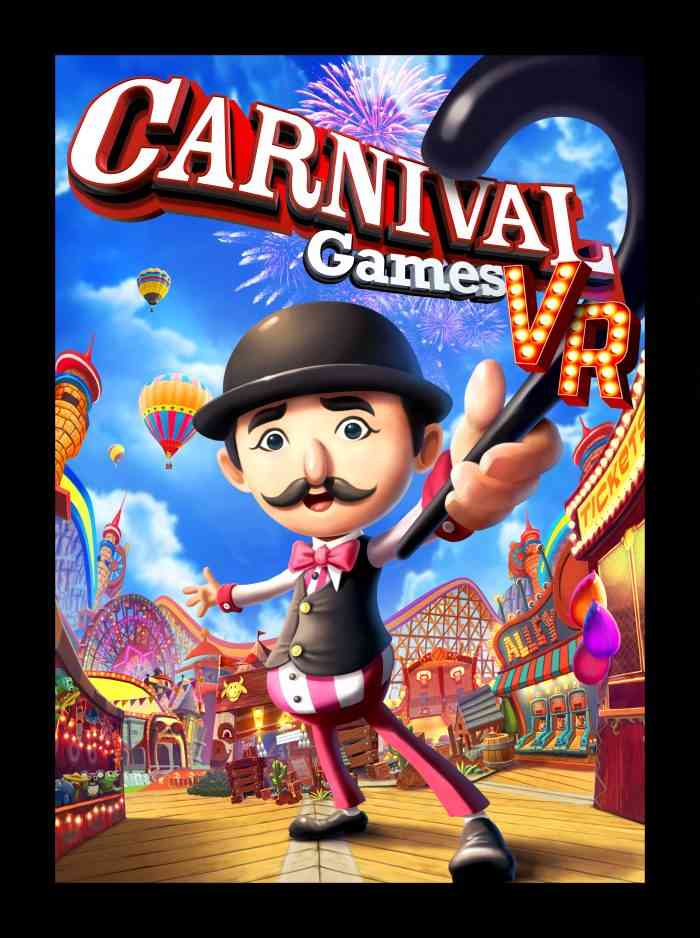