I’ll admit, I cannot remember the last time Call of Duty DLC blew me away. Sure, I’ve seen some strong packs released from the various development teams over the past few years but I cannot recall the last time a single map pack truly felt like something special. That is until now. Call of Duty: Black Ops III Awakening is strong start to the Black Ops III DLC season and stands as one of the more memorable pieces of CoD DLC I have played in quite some time. There are no gimmicky horror characters like Jason, or the Predator. They haven’t dropped a truck load of cash to bring in some top Hollywood voice talent who merely sling out a few one liners. It’s all about appeasing those that spend countless hours prestige’ing their characters in the Black Ops III multiplayer universe.

Granted, Treyarch has not strayed away from Activision’s CoD DLC playbook. Awakening is the first DLC drop with 3 more to come before the next yearly CoD game arrives. You get four new multiplayer maps (Gauntlet, Rise, Splash, and Skyjacked) and a new zombie map called Der Eisendrache. On the surface it is all standard stuff but this time around the maps are the star of the show with two (Splash and Gauntlet) that stand tall above the pack making this DLC a must own for fans or for anyone looking to get back into the CoD online arena.

“I used to consider the zombies mode an afterthought. Something I’d tackle when I am bored or just tired of getting slaughtered online. Now; however, it is almost my immediate go to mode.”

“Splash” is quite easily the stand out of the pack. It is set in an abandoned fictional water park called Hydro World. It is a stunning, vibrant and beautifully rendered map that features water slides, a lazy river, and wrecked pirate ship. It’s got water tubes, tunnels, caves and everything you would typically see at any water theme park. Most of the gun fights tale place at the center of the map where I never seemed to survive for longer than a few seconds but there are still plenty of other areas to dominate. The long sight lines down the sides of the map will benefit the long range sniper fans while lurking in the caves and buildings will benefit those who enjoy their shotty’s. I would consider this map one of the larger ones in the game but it is still best for medium range weaponry. It’s a remarkable map and one the development team must have been working on for quite some time. 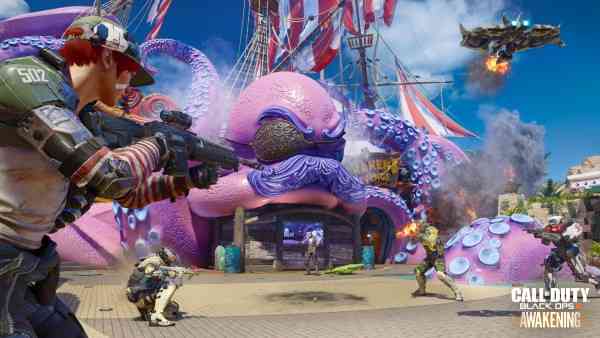 A close runner up is “Gauntlet” as it is definitely one of the more unique maps I’ve ever played. The best way to describe it is it’s like three maps in one. Like Splash, it is a larger map and one that feels a lot larger than it really is purely due to its terrific layout. A third of the map is a sprawling jungle, another third is a rainy urban landscape and the other third is a sub-zero arctic snow map. It is a slick looking brilliantly detailed map which features numerous sight-lines and unprecedented verticality. Like Splash it is a map you won’t forget anytime soon. 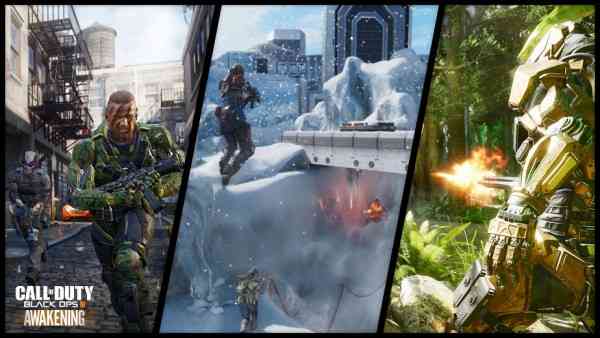 “Skyjacked” is clearly a popular map in its first week of release. Over and over everyone in the lobbies selected this map. It’s a modernized version of the Black Ops II multiplayer map Hijacked. While I enjoyed the map, it still feels a little early to get a modernized version of a map we played only a few short years ago. Set on a helicarrier Skyjacked features everything you loved about Hijacked but has the addition of wall running in certain areas. There is no question it’s a lot of fun and there is some comfort in the familiarity of the map but for me it just had too much of that ‘been there and done that’ feeling. 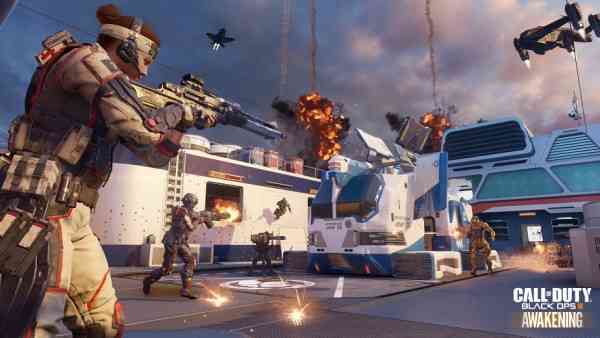 The last of the multiplayer maps, “Rise”, is a wonderfully balanced map that takes place in the snowy outskirts of Zurich. It is set in the middle of a construction site for a subterranean Coalescence research campus. Similar to Splash, Rise accommodates several play styles. It’s a large map with many close quarter and wide open areas to battle. It has a bit of a generic feel and certainly wasn’t one of the most popular votes in the lobby but it does round out what is a solid batch of online maps in Awakening. 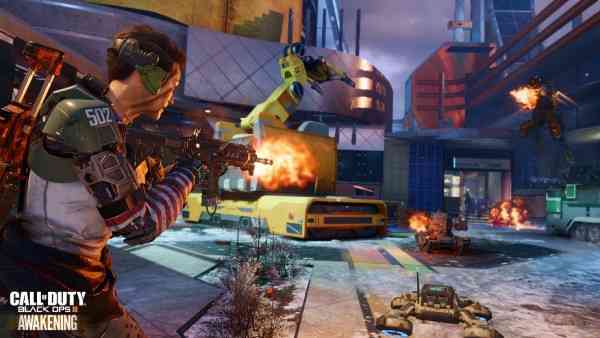 I used to consider the zombies mode an afterthought. Something I’d tackle when I am bored or just tired of getting slaughtered online. Now; however, it is almost my immediate go to mode. There is something about uncovering all the secrets of the zombie map and surviving the waves upon waves of relentless flesh eating zombies. It’s addicting and if you get playing with the right team mates who communicate and have amazing survival skills, the mode is a blast.

Zombies fans will have plenty to enjoy with “Der Eisendrache”. Like I mentioned at the outset, this is a no frills and no gimmicks DLC. The new zombie map is no exception as Der Eisendrache picks up where the previous zombie map, “The Giant”, left off. This map is set in a creepy medieval Austrian castle during World War II. The four characters (Richtofen, Nikolai, Takeo and Dempsey) embark a journey of discovery as the ancient site where the castle sits was the scene of unspeakable horror. There really isn’t much to give away here as nobody is playing zombies for its storyline. Yet it is hardly a mode where you can turn your brain off. 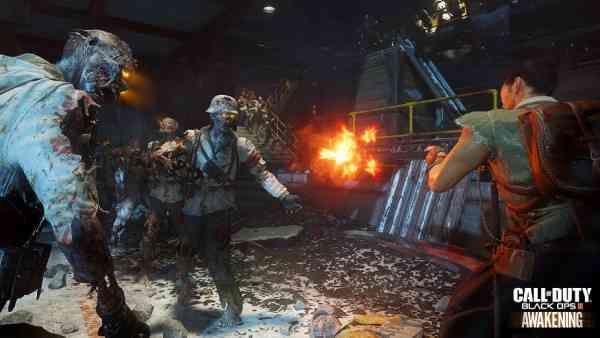 Der Eisendrache, like other zombie maps, requires planning and careful use of your resources. Not to mention you have to be careful how you use your currency when it comes to opening gates, purchasing weapons and other abilities, including a new batch of Gobblegum power-ups. Visually, it’s a richly detailed map but doesn’t quite feel as large as some of the other zombie maps I have played in past few years. That said, it is a blast and sets the stage for what will likely be a strong zombie season for fans.

Admittedly, not being able to play the new DLC over and over in its own playlist is an annoyance. This time around the development team made the decision to mix the new DLC maps with the existing ones which stinks for those who just want to get into the new maps. Regardless, this small annoyance doesn’t take away from Black Ops III’s strong first batch of DLC. The “Splash” and “Gauntlet” multiplayer maps alone make this DLC an easy purchase for fans of the game. Treyarch should be pleased as they are out of the starting gate with a rock solid batch of DLC. 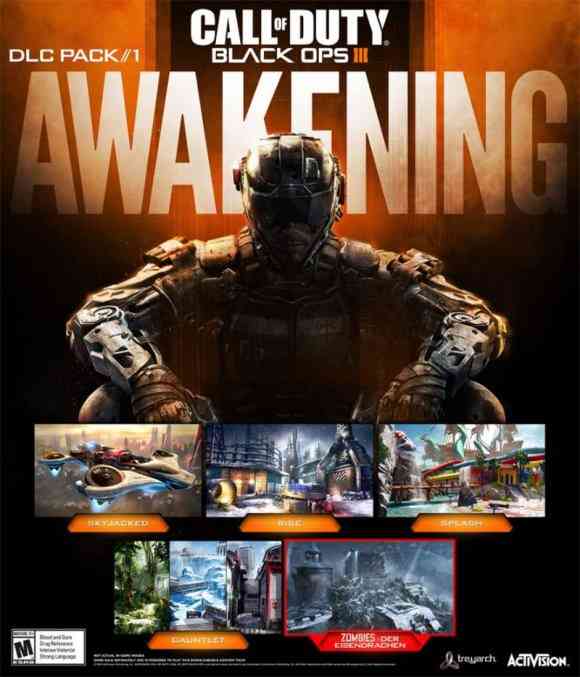 Call of Duty Pro Crimsix Has Officially Announced His Retirement
Next Bombshell Review – Easy on the Eyes, Horrible in Every Other Way
Previous Distraint Review – When You Find Out the Cost, Can You Pay the Price?