Bombshell Review – Easy on the Eyes, Horrible in Every Other Way

Bombshell is one of those games that at first glance looks kind of cool, kind of fun, and maybe worth your time, but after the first five or ten minutes of gameplay you end up with severe buyers remorse. It’s too bad, because I really thought this was going to be a fun twin stick shooter. This is apparently the first new game from 3D realms in a decade, and I’m sad to say that the new start doesn’t look good.

If you decide to check it anyway, you’ll be filling the boots of Shelly “Bombshell” Harrison, a protagonist who was originally slated to play a lesser role in a Duke Nukem game. Now, she’s fighting to save the world from an alien invasion with her mechanical arm and cheesy one-liners. The presentation itself isn’t half-bad, and cutscenes actually look decent, but it’s difficult to appreciate anything when you’re busy paying attention to horrible dialogue and a plot that you don’t care about.

“This is apparently the first new game from 3D realms in a decade, and I’m sad to say that the new start doesn’t look good.”

The thing is, I love over the top, campy movies and games. Something that doesn’t take itself too seriously but is genuinely trying to give you a fun experience is usually a blast, even if there are some plot holes or cheesy overacting along the way. Bombshell doesn’t give you any of that. It tries desperately to get there and at times it does feel like the developers were close, but their best efforts just didn’t seem to reach those goals. Jokes fall flat, the only character you’ll remotely care about is Shelly, and the action is kind of fun but nothing special.

As for the actual gameplay, you’re left with a typical top-down dungeon crawler featuring fetch quests and a standard leveling system. Unfortunately, what should have been fairly simple controls for such a game end up feeling terrible unless you remap them. You’d think using a gamepad would be the perfect choice to play a twin-stick shooter, but in this case you’d be wrong. The control scheme is riddled with simple mistakes, like forcing you to stop aiming to swap weapons, and then having the swap abilities button be somewhere else entirely. It doesn’t feel like it was formed by cohesive thought, and it isn’t intuitive at all. 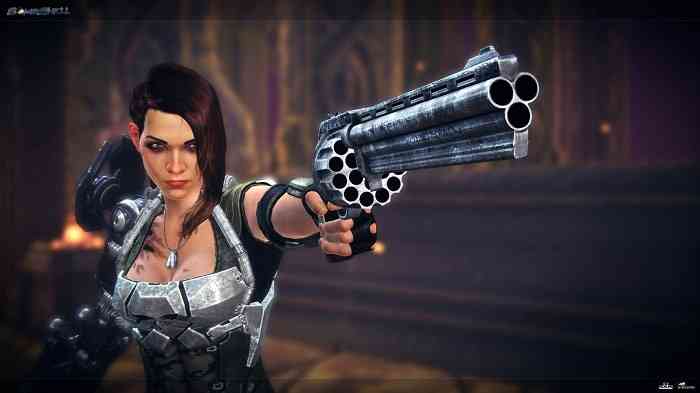 The camera feels bad too. For a ranged combat game like Bombshell, you’re zoomed way too far in. For a lot of the game, I found myself staring at the mini-map instead of my character because it showed enemies that were otherwise off-screen. If you run in blindly, there’s a good chance you won’t see the exploding enemies you encounter later that cover you in acid… until it’s too late. This results in a lot of stop and go gameplay, where you get hit by an explosive you could barely see and then just wait for your shields to regenerate before proceeding. If the camera was a little pulled out, minefields like this would actually be a fun little change of pace where you could get in some quick target practice.

“… ultimately what you’re left with is a game that is worth far less than the asking price of thirty dollars.”

One thing that I actually did kind of like was the upgrade system for the guns. It’s pretty simple, you basically just spend KY, the in-game currency, on lines of abilities like increased damage or alternate firing modes. This was one of the few redeeming factors, and the only reason I kept playing. Most of the guns actually do feel fun to shoot, aside from your primary weapon. The developers decided to go with something in between burst fire and fully automatic, where you can hold the trigger to do an extended burst or let go earlier to only shoot a few rounds. It just feels… weird. I always resorted to just tapping the trigger instead of holding it for the extended burst, and really don’t know why they went with that approach.

There’s just really not a whole lot going on for Bombshell. The cutscenes look kind of nice, and when you look at the gameplay from a distance it can seem fun, but ultimately what you’re left with is a game that is worth far less than the asking price of thirty dollars. Aside from the gameplay itself, the overall quality is marred heavily as well by a large bug count. I was lucky and didn’t run into many problems aside from a couple crashes, but many are reporting problem after problem, some even game-breaking. Just stay away from this one, it’s really not worth your time.