Resistance comes equipped with two new multiplayer maps, Valkyrie and Anthropoid, and a remake called Occupation. In addition to these three multiplayer maps, Resistance also brings one new map specifically made for War play, Operation Intercept, and of course, a brand new zombies map called The Darkest Shore. Time and time again we’ve seen the creators of Call of Duty keep the same formula alive, both in regard to the game as a whole and to the DLC content. Although Sledgehammer hasn’t exactly reinvented this formula, they have changed it up a bit in this first DLC, and if you’re a fan of the War game mode, it’s hard to be disappointed about.

If you wanted to take a stroll, or rather a run, through the early 1940’s during World War II, all of the maps do a great job of simulating the destruction and loss experienced by many during this time. Sure, this may not be the exact reason to get excited about the latest DLC, however, there’s something to be said about Sledgehammer’s execution and depiction of that time. Further to this, Resistance, at the very least, adds a much-needed map variety to Call of Duty: WWII.

“The Darkest Shore embodies the name of the map to a tee and is truly the darkest shore I’ve ever been on.”

The first new multiplayer map, Valkyrie, is based on a collection of bunkers that Hitler used during the war, and there’s no doubt about it, it looks amazing. From the various bunkers and war paraphernalia scattered throughout, there is a ton to look at. And look you will, for campers hide around every corner and in all of these bunkers. Valkyrie is a relatively small map, and as a result, has fairly limited spawns, however, if you’re able to get out of the spawn, you can run up any of the three lanes and do some serious damage. While there is plenty of cover and a few mounted weapons throughout the map, it’s hard to deny that this is the map that caters to the campers and spawn trappers. Despite the way it looks, this is probably the most frustrating of the new maps to play. 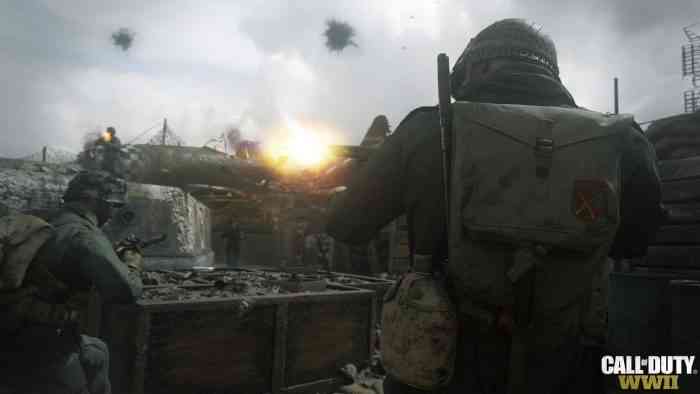 Anthropoid, is a large and sprawling city inspired by “Operation Anthropoid”, that allows for a very wide range of play styles. Not only are there several sniper nests available throughout the map, don’t say I didn’t warn you, there are also plenty of paths to use to flank your enemies if you’re a run and gunner, and corners to sit in if you’re a camper. And if you’re wanting to work on that tan before summer, you can always go for a swim in the river in the middle of the map. Of course, you may want to watch out for literally everyone else, as this is a high traffic area and this low ground leaves you vulnerable from above on both sides. Without a doubt, this is the best map of the DLC, as it remains exciting no matter how often you play on it and gives the players what they’ve been asking for: variety.

Occupation looks quite similar to it’s aptly titled Modern Warfare 3 map, Resistance, and although it was remade last year in Call of Duty: Infinite Warfare, many felt it just wasn’t the same. If you’re unfamiliar with the map setup, it features the usual COD formula, with three main lanes for quick combat. Despite this, however, snipers quite often have the upper hand, as there are a few open spots that leave run and gunners vulnerable throughout the map. Now, dropped in the streets of Paris, old-school fans can feel a sense of nostalgia, and if that’s not the point of a remake, I’m not sure what is. Although I’m not exactly the biggest fan of a map being remade twice, Sledgehammer does a great job of revamping the original map in a way that just wasn’t captured last year in Call of Duty: Infinite Warfare.

“…all of the maps do a great job of simulating the destruction and loss experienced by many during this time.”

Operation Intercept is the fourth map of the Resistance DLC, though it’s limited to use in the War game mode. While I understand the appeal of the game mode, I’ll be the first to admit that I haven’t been the biggest fan thus far. Operation Intercept adds something new to War, though admittedly, while I found it to be more fun than the maps that originally came with the Call of Duty: WWII, it’s more of the same. The first objective adds a bit more variety, however, as you either rescue or hold hostages, before moving on to similar objectives: destroy/defend radio systems and escort/stop a tank from making its way through the map. Though there is quite a bit of cover here to be found, there’s no denying that smoke is very much needed at every step of the way.

Despite the multiplayer maps feeling like they’re just more of the same, the latest Nazi Zombies map, The Darkest Shore, is the complete opposite. If you’ve followed my review of the Infinite Warfare DLC content, you would know I’m a) not the best at the game mode, and b) not a fan over complicating the maps. Something I have to admit here is that even though The Darkest Shore isn’t exactly simple, it’s damn good fun. The new zombies map is exactly what Sledgehammer has been saying it would be: dark and twisted. The Darkest Shore embodies the name of the map to a tee and is truly the darkest shore I’ve ever been on. 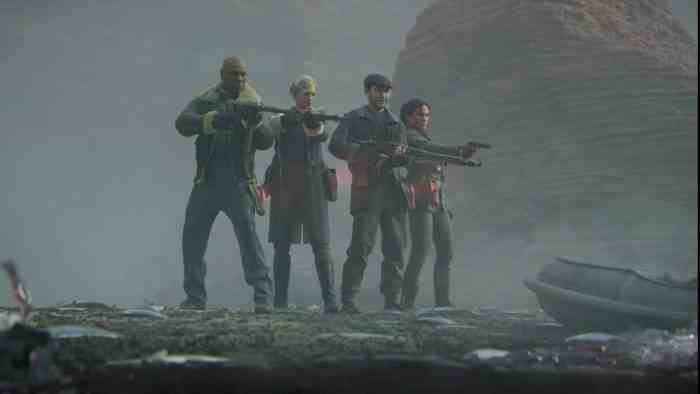 Taking place a few days after the bloody and horrific events of The Final Reich, the first zombies map, the crew follows some intel that brings them over red-stained water to a foggy island. This is a big map with a bunch of unlockable bunkers, trenches, and narrow passages that makes movement a breeze…until the fog hits anyway. Every so often a thick fog clings to the map, creating not only a spooky ambiance but effectively cutting down your maneuverability. If you’re wondering just how much of an effect this has, you might be surprised to learn that this can make the difference between life and death. And it doesn’t really matter how well you learn the map either because with the undead hot on your trail and visibility limited to just a few steps in front of you, you can start to feel your panic rise! Ok, so maybe I’m over exaggerating just a bit here, however just wait until the big bad zombie with extra limbs takes a swing at you from the fog and then suddenly disappears! Can someone say creepy?

While the multiplayer maps aren’t exactly breaking the mold, the latest zombies is quite literally killer and whether you’re a fan of the war game mode or not, you’ll enjoy the latest addition to it in Operation Intercept. The Resistance DLC is off to a good start, however, the future DLC need a bit more oompf where the multiplayer maps and content are concerned to make a bigger splash. Sledgehammer would have been wise to wait to release the newest Resistance Division as a part of the DLC and that could’ve made all the difference here. Not a bad addition to a good game, just not fantastic either. I’m looking forward to seeing what the next DLC holds for us.