Retro, revamps, and throwbacks are still all the rage in the gaming industry these days, but it’s a very fine line between cash grab and remaking/re-releasing a quality game. Taito’s latest effort brings back the classic Bubble Bobble franchise on March 31, 2020 with Bubble Bobble 4 Friends exclusively for the Nintendo Switch.

The opening sequence of this game is actually quite clever. Similar to the movie Toy Story, it features toys that have come back to life, including stuffed versions of the memorable dinosaurs from Bubble Bobble, “Bub” and “Bob”. After the introduction of our crazy duo we are thrown into a classic Bubble Bobble arcade machine. This opening sequence really showcases the new style and graphics that have been worked into this title. Bub and Bob are extremely cute. I mean when aren’t cartoon baby dinosaurs cute? The art style is bright, pastel and fits perfectly the direction this game is going.

If you are not familiar with the gameplay, it’s classically easy to understand but tough to master. As Bub or Bob, you use your bubbles to shoot out at enemies to trap them, and then you pop them with your dino-spikes or jump on them. You can also do this with items that appear on screen such as fruit and other rewards that include extra lives. In terms of the latter, you will need these extra lives as this is an arcade style game where having as many lives as you can is important.

Taito really captures what made the original Bubble Bobble such an enjoyable game in the first place. This was the type of arcade game that would get a ton of quarters because it’s both addictive and challenging. With Bubble Bobble 4 Friends you will have a ton of fun racing around and blowing bubbles and the game is even more enjoyable when you add in more players. Controlling your dino heroes is easy enough to do as the game keeps up with all the items and bubbles on a filled screen. I never found the game to slow down which allows the fast paced action to continue.

Bubble Bobble 4 Friends adds a ton of new elements to the simple concept. This includes special skills that are rewarded at the end of completing each world, like the ability to shoot bubbles further, fire/electricity bombs, or a dash that allows you to get through enemies in one piece. These special skills are not groundbreaking, but they can come in handy at certain points in a level. They also serve as a reward for completing a world. The main new element of Bubble Bobble 4 Friends really is the 4 player co-op which allows for multiplayer couch co-op during any point of the game. That said, this is a local experience only as it does not support an online mode, which is a definite drawback. 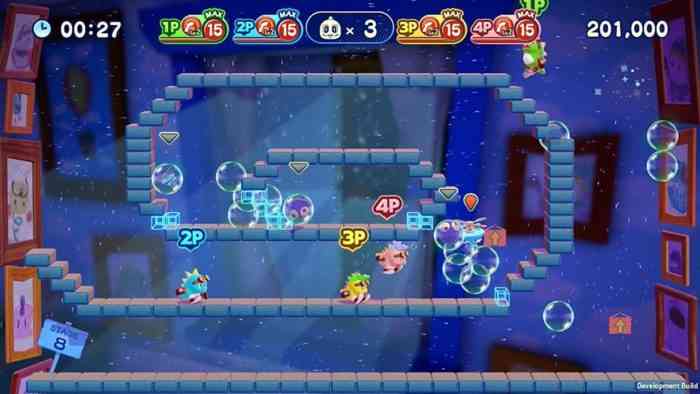 There is a reasonable amount of gameplay here though, with over 50 levels and five worlds, each one featuring a boss battle at the end. Complete these and you will unlock hard mode. There is also a ranking system for each level that allows players to replay levels to gain a higher rating, however there is no reward for doing so, just bragging rights. The game will take about 30 hours to play through, which isn’t bad depending on the price that you pay. It’s worth mentioning though that here is limited replayability once you’ve completed the levels, unless you use it as a party game.

Bubble Bobble 4 Friends is the type of game the Nintendo Switch was made for. It is a title that anyone can pick up and play and it gets progressively more challenging the deeper you get. It is fast, fun, and simple. While not exactly a long game you will enjoy every second of this charming game. Add in the ability to play with up to 4 friends locally and it makes for a great party game. Taito really had a challenge here with the concept of revamping Bubble Bobble, because if you change the game’s ‘tired & true’ formula too much, it can result in a game that doesn’t feel the same. On the other hand, if it’s just the same basic game it can come off as a “cheap cash grab”. Luckily, Taito understood the market and the Bubble Bobble franchise by keeping the things we love about the original while still being able to pull us in and keeping us there with some new elements and updated graphics. 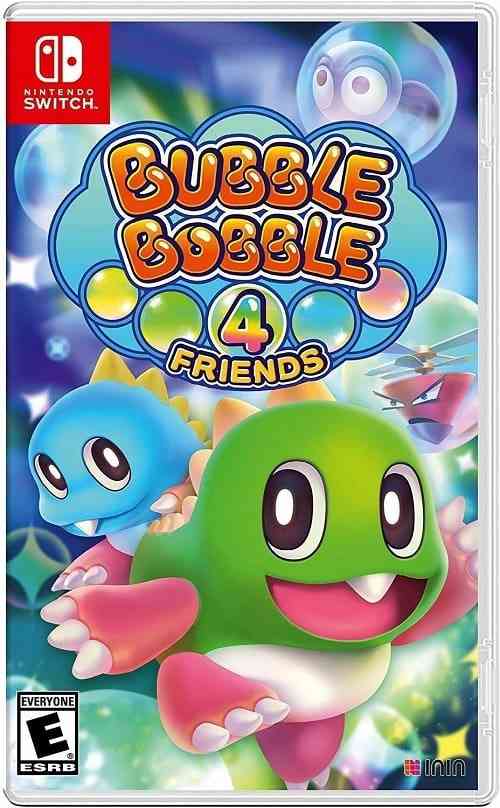