Bow to Blood (BTB) is one of those games that plays perfectly fine in flat mode, but when you don your VR headset the level of immersion takes the game to another level. Bow to Blood may have you pilot a futuristic airship, but the controls and responsiveness of your craft are firmly planted in a nautical experience. Rolling and pitching your ship vertically or horizontally has a sluggishness and residual inertia that goes slightly past your target course that feels natural. It’s a great sensation in VR that you acclimatize quickly to as you gain your sea legs.

In BTB you are one of eight ships that compete against one another in a seasonal competition where the team that ends up at the top takes home all the glory. It’s a setup very similar to Starblood Arena. You captain a ship with a crew that you assign specific duties as you oversee everything from your station. BTB is very Star Trek Bridge crew but with a streamlined control scheme and fewer crew members to deal with. There are four functions that you control: Overshield, Advanced Weapons, Drones, and Boost. Learning when to use each effectively is part of the challenge of successfully finishing at the top in each level. In a pinch, you can also pull out your trusty blaster to take of pesky enemies that slip past your main guns.

The levels offer a variety of different objectives. In some, the goal is simply to gather more treasure than any else. In others, you are under a time limit to finish. Others are a straight race. And in all of them you may decide to blast away an opponent but due to how you interact with the other ship captain’s, going in guns blazing is not always the best option. 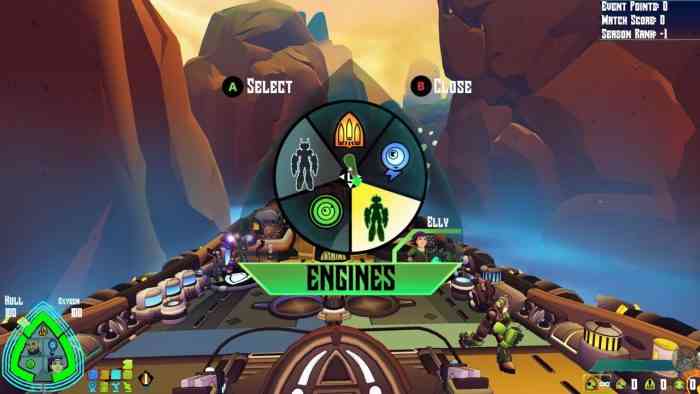 This will be explained shortly. Back to the levels and graphics. The levels are procedurally generated which keeps them distinct every time you play them. As with games that create their levels in this manner, the look of the levels is not as detailed and over time they blur together. Especially in BTB because many structures hang in the air reducing the need for the details. The textures are also basic. The plus side for VR is that this makes for clean graphics—hence, a pleasant virtual experience.

Now about going into BTB with the intent of blasting away all your opponents—not a good idea. BTB has a strong strategy element embedded in your dealings with the other captains. Alliances are possible and have a noticeable impact on your success. Are all your competitors against you? You’re in for a tough time. Are you friends with everyone? Much smoother sailing. More likely, though, is that there will be a mix of friends and foes which keeps the gameplay very dynamic.

Friends can give you better weapons while foes are apt to plant a bomb or two on your ship. After each round, a culling takes place where all the captains vote on which of the two bottom finishers should be allowed to continue. There’s little doubt as to your opponent’s loyalties but the different possible combinations really added a much-appreciated level of complexity to the game. Bow to Blood is a solid game elevated by the procedurally generated levels and the morality system.


Until You Fall Review – Neon Swordfights