Hob is an indie action-adventure game originally released for consoles back in late 2017, and it has now officially been ported to the Switch in a way that fits its charming nature perfectly. Hob seems made for the Switch, as its relaxing gameplay and intoxicating world makes it a great little game to play on the go.

Hob is prefaced by little explanation. Players are plopped into the game with virtually no direction or dialogue, and it’s up to you to figure out where to go and what’s going wrong in the beautiful, mechanical world. Exploration is the driving quality that gives Hob its uniqueness, and it’s a soothing yet stimulating experience. The narrative unfolds through discovery rather than through text or dialogue and though this process is beautiful, it occasionally leaves you asking what you’re doing and what the point is.

Gameplay has you jumping across platforms, pushing objects and solving different puzzles in a Journey-meets-The-Legend-of-Zelda fashion. At the beginning of the game, you have your arm chopped off by a mysterious monster and replaced with a mechanical arm that allows for different abilities that can be upgraded as the game progresses. There are light combat elements against enemies that are relatively unintelligent and a little too easy at times, and the puzzles are truly where the game shines. 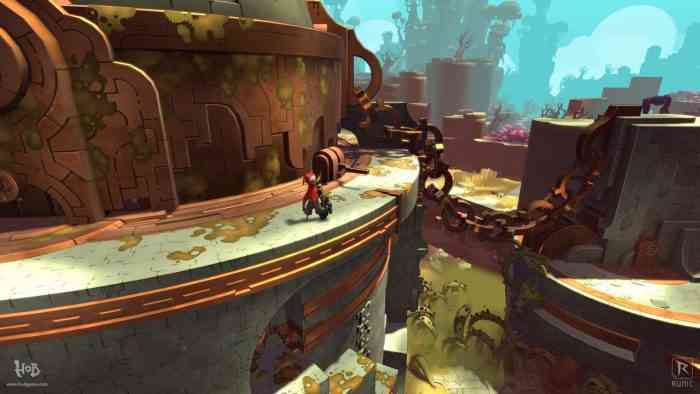 Hob plays smoothly on the Switch, with no major performance issues. The reworked camera allows for more control in the ported edition than on the original consoles and touch screen capabilities have been added. Visually, it looks beautiful both docked and handheld, and playing it on the go with the HD rumbling makes it fun to be immersed in on long commutes or during travel.

Overall, the new port is solid in execution and the indie title is perfectly suited for the Switch. The frame rates are speedy, the loading screens are quicker than a blink of an eye, and the controls are intuitive. Though the narrative and direction of Hob can be unclear at times, unraveling the mysteries of its charming world on a handheld console is a true delight.

Oneiros Review – Dreaming of Puzzles in a Puzzling Dream