VR on the Playstation platform has become the most successful mass consumer virtual reality product. Sony’s sleek, sexy, and very comfortable PSVR headset is pushing towards 4 million units sold. A very small percentage compared to the actual number of PlayStations sold but much more than any of those VR headsets sold by its PC competitors.

Even though the PSVR is not as robust as a Vive or Oculus in terms of technology or tracking capability, it does thrive because of two very important reasons. One – the unit is simple to setup. It’s basically plug and play. Two – they have developed a healthy catalogue of VR titles. Most of them are little more than demos that take 3 or 4 hours to play but more and more of their library is including Triple A titles like Resident Evil 7 or Skyrim VR. Borderlands 2 VR is another new and significant offering. Here is another well-received game getting the virtual reality treatment and having these level of offerings for PSVR will only continue to boost the headset’s profile. Of course, it will be all for naught if the VR conversion of Borderlands 2 is jinky or subpar in any way. Is it? Let’s strap on the headset and see!

The most oft repeated laments about this iteration of Borderlands 2 in VR is it does not include the DLC, has no multiplayer, no co-op, and no AIM support – at least upon release. So Gearbox Software had a couple of big strikes, depending on how important any of those items are to you, going into this. If the conversion of Pandora to VR was subpar in any way, then the $50 launch price would be a no go. To be clear, Gearbox Software announced these limitations of the VR release beforehand so this review is about what is in the game versus what is not.

Well, I’m happy to report, those items aside, Gearbox has delivered a first-rate job. Pandora in VR is fantastic! This is one of the best looking games for PSVR. No doubt the cell shaded graphics of the game are perfect for conversion to virtual reality. The thick black lines on object edges and the lower texture details are a boon to the capabilities of the PSVR. Detail and imagery is sharp and even extends to images further outlook better than do on many other VR games. The nature of cell shaded graphics help mask any visual deficiencies. It’s a blast to wander the world of Pandora with everything presented life-sized including the ever yappy robot sidekick – Claptrap. The image is not blemish free though. Turning induces judder and how bad it is depends on how you set the turning speed. The faster the speed the worse the judder. Unfortunate, but not a game breaker. 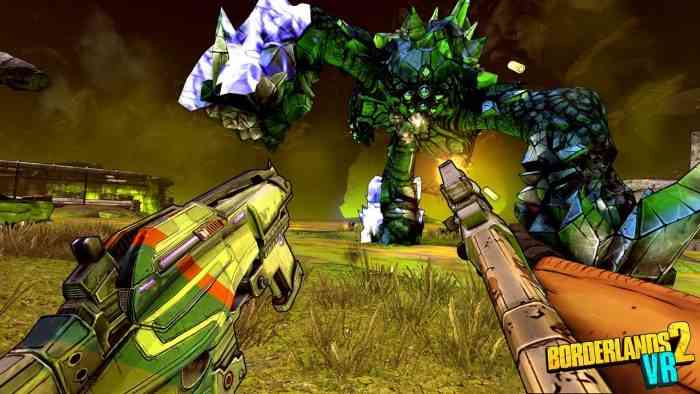 Where Gearbox Software really earned their pay for this conversion is in the game controls. The controls are tight. It doesn’t matter which scheme you go with: DualShock 4 or the Move controllers. The game plays great either way and I prefer using the Move controllers because it just feels so much more natural and immersive that way. A VR specific menu has been added where players can adjust the comfort settings to their individual liking. You can set the strength of the tunnel vision, your turn rate, and whether you prefer to teleport and walk or free walk and jump. Or combinations of the two. Most excellent! This amount of control should be standard on all VR games.

Borderlands 2 VR is by no means a perfect game though. There are few niggling distractions though. Cutscenes are still in 2D. A disappointment and an immersion breaker. Menus can be clipped, showing up partially buried inside world objects. It’s not a biggie though, you just back up and redisplay the menu. Some reports of difficulty using strafing properly have surfaced too using the move controls – I tend to back up and circle more with these. Strafing with the DS4 works fine. Menu navigation is definitely clunkier with the moves and is my biggest complaint. Even with the DS4, getting around the menus proves this game was designed with a mouse and keyboard in mind. 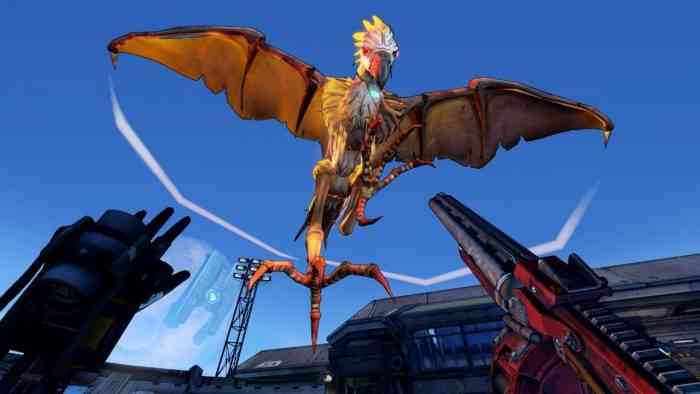 Aiming is easy in VR. With the DualShock 4, aiming is controlled by your headset whereas the moves control the aiming. Another reason I prefer the move controls. Sometimes in the heat of the battle, you may lose your bearings and situational awareness of where all the enemies are. Gearbox comes to the rescue with a bullet time mechanic called Bad Ass Mega Fun or BAMF time – created for the VR version. For two seconds you can slow down time to extricate yourself from any dicey situations. You can play as one of 4 character types – tank, mage, gunner, or ninja – as suits your play style. Another curiosity noted by Borderland experts, this version of the game seems easier than the 2D version. Whether this is due to the AI being changed or improved situational awareness that VR brings, is something to be determined with more play time.

In the end, the parts that work well, even the driving mechanic allows for a first-person view, all add to a very engaging VR experience. Getting to explore Pandora and interact with all the various characters and creatures in scale is a helluva lot of fun. Hopefully, the rumors of forthcoming DLC and Aim support will materialize down the road. In the meantime, it’s time to lock, load, loot, and explore Pandora! 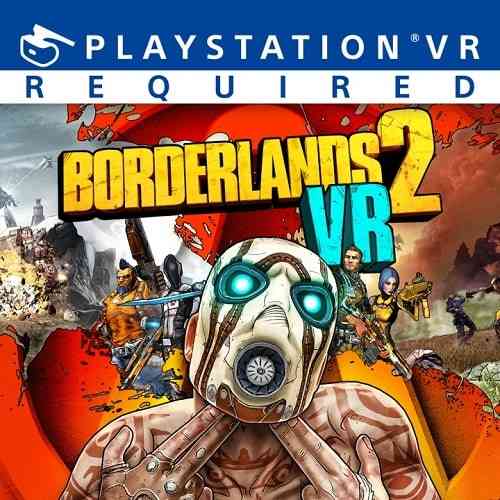 The Walking Dead: Saints & Sinners Chapter 2: Retribution Review – More of a Good Thing
Next Katamari Damacy Reroll Review – Worth Rolling Through All Over Again
Previous The Last Remnant Remastered – One of The Best JRPG Combat Systems Around