The Last Remnant was first released for the Xbox back in 2008 and remastered for the PS4 this year. The Last Remnant is an impressive game with both classic and revised JRPG elements, and its graphics and controls make it hard to believe it was released ten years ago. However, despite its fantastic combat system and creative design, it lacks a bit in character development and effective storytelling methods.

To be as spoiler-free as possible, The Last Remnant is set in a fictional world where ancient artifacts known as Remnants are scattered and bound to rulers of different lands. In this world, there are humans (known in-game as “Mitras”), big fish people (“Yamas”), reptilian people (“Qsitis”), and tall, dark, and handsome cat-like people (“Sovanis”). We play the game as Rush Sykes, a headstrong and simple-minded Mitra who is trying to rescue his kidnapped sister Irina. Rush, holding a mysterious talisman Irina dropped as she was being captured, runs into David Nassau, the young Marquis of Athlum who holds a Remnant known as ‘Gae Bolg’. After hearing Rush’s story, David and his four generals decide to aid Rush on his journey to finding Irina. Later on, we meet the Conqueror, and ladies and gentlemen, you will want to get to this part.

Like many JRPGs, you control the protagonist through a third-person view. Rush has the ability to slow down time, which gives a nice advantage when attacking monsters first. There are no random encounters in the game, as you can always see the type of monster that is in the way. To ensure you have the upper hand, you want to be the one initiating the battle.

The combat system featured in The Last Remnant is complex in its design yet simple in the actual controls. Instead of planning the actions of individual units, you command different groups of people. This allows you to group members of your party into different teams, known as unions, and determine their battle formations. For example, you may use one Union to employ combat skills and another to use mystic skills against monsters, while a third Union provides support and healing to the rest of the team. However, you do not have the ability to give each warrior individual commands, which can be frustrating because not all fighters may be able to perform the command and they may just “standby” and do nothing. Each union also has an assigned leader, and if that leader dies in battle you lose control of the rest of the members within that group. As you progress in the game, some fights will start feeling repetitive, but with each additional challenge, you can expect more epic battles that require a bit more strategy. 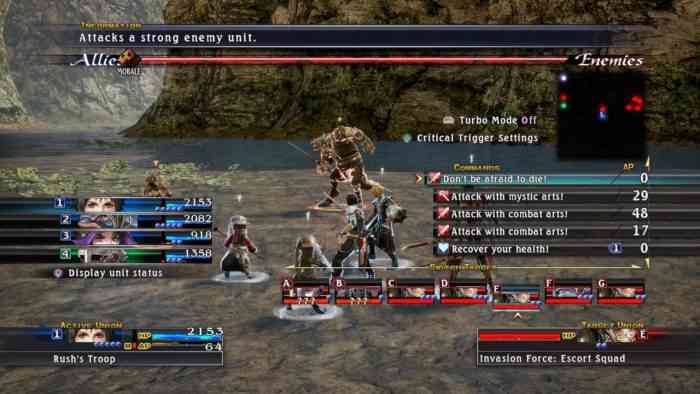 The game definitely deserves a lot of praise for having such a sophisticated combat system, along with its excellent soundtrack and creative character designs. I did not experience any issues with the graphics, loading screens, or the speed of the battles (you can turn on turbo mode if you really want the battle to end faster). One of the biggest advantages I found in The Last Remnant is the continuation of the game even if Rush is killed by a monster. You still have the ability to control the unions that are left in the fight, and everyone’s health restores after the battle is over – including party members who died during the battle. This is unlike typical JRPGs, where the game ends immediately after the protagonist dies.

There were some quirks of the game that frustrated me, including the lengths of the side quests. While some of the side quests were short and sweet, you could really feel the ones that were drawn out too long. One of the earlier quests involved Rush running to different pillars in the middle of a desert that were miles and miles apart from each other. Halfway through the quest I wanted to give up, but didn’t because I had already invested so much of my time.

Another thing worth mentioning is the number of random characters. There were so many characters that I could not tell them apart under their armor. In my party, I had the main character, a kickass nobleman and his four powerful generals, and then two random dudes I found in a guild. Don’t get me wrong — the ability to pick and choose who to add to your party is extremely cool, and they even have their own voices. But many of their stories go completely unexplained. Who are they? Why do they care about me and my sister? And why is the marquis of Athlum okay with having them around? 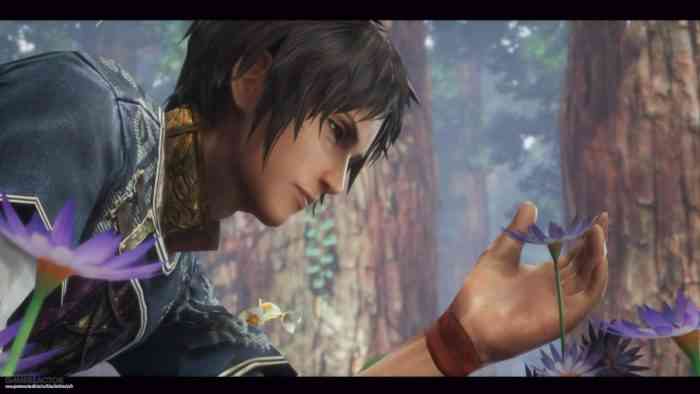 While the plot is very interesting, most of the character development is minimal and the storytelling method is a little choppy. Due to the amount of characters you can have in your party, it is understandable that it would be impossible to have a backstory for everyone. Of course, I am not talking about the random man I recruited only because I liked his name, but about the main characters — I feel as if I didn’t get to become Rush Sykes, despite experiencing his story. While I did feel some empathy towards some other characters later on in the game, it is a shame that Rush wasn’t someone I felt I knew best.

A Sound JRPG Worth Your Time

Having all that said, there is nothing I would change or remove from The Last Remnant, but there is room for some additions. It is fine as a simple game and the characters are lovely, but I know it has the potential to become even bigger. So much imagination was used to create such an epic story and to have named all the different characters, monsters, places, and remnants, and I believe a lot of these aspects could become sentimental pieces and not just names in a game. Overall, if you are looking for a fun, straightforward, and interesting JRPG with fun twists, The Last Remnant fits this description and is worth the play.


Gotham Knights Shows off the Court of Owls in New Trailer