Blast From the Past

There’s nothing black about this future – Black Future ’88 kicks ass.  It’s a roguelike that attempts to break away from a few of the norms of the genre, creating something that feels familiar yet fresh and exciting at the same time.  Developer SUPERSCARYSNAKES (points for a fantastic company name) chose to build the game around more vertical movement as opposed to the traditional top-down style of genre classics like Enter the Gungeon and Binding of Isaac, to much success.  Traversing up and down the levels of the massive, ever-changing, enemy tower known as the Skymelt has been a complete blast, and all roguelike fans need to keep Black Future ’88 on their must-play lists.

The first thing you need to know about Black Future ’88 – you have 18 minutes to live.  After the time expires, your heart explodes.  It’s an exciting concept that lends itself perfectly to both types of people that will be playing this game.  Do you need something to pick-up-and-play in short bursts for a commute?  Or would you prefer something you can hunker down with, and spend hours on?  No matter what you’re looking to get out of the game, you’ll be covered.

That tiny, knotted, heart of yours may only be good for 18 minutes, but that doesn’t mean there aren’t a bevy of drugs you can use to help you along the way.  Upgrades can be acquired through the use of ‘stims’ (or by defeating bosses); however, be careful, as too much stim use can lead to blood infections.  Other upgrades are attainable by trading time off of your life clock, or by sacrificing bars of health.  It’s a tremendous risk-and-reward system that does an excellent job of not getting over-complicated, but no doubt, I more often than not found it to be better to keep as much time on the clock and as much health as I could.

You’ll want all that health and time to deal with the onslaught of mech and humanoid-style enemies that will be thrown your way.  The action here is fast-paced, fun, and frenetic, at times reminding me of games like Contra for it’s horizontal and vertical movement, but also delivering its own unique experience.  Your character has a dash move that can be used to avoid enemies or their gunfire, but it’s frustrating that you aren’t able to dash diagonally – again, only side-to-side and up-and-down.  I’ll admit, there were times I was begging for the ability to do a diagonal dash.  If things get a little chaotic for you, however, there’s a friendly “assist mode” that will dramatically reduce damage intake, increase damage dealt, and generally make things easier for you as you ascend the tower. 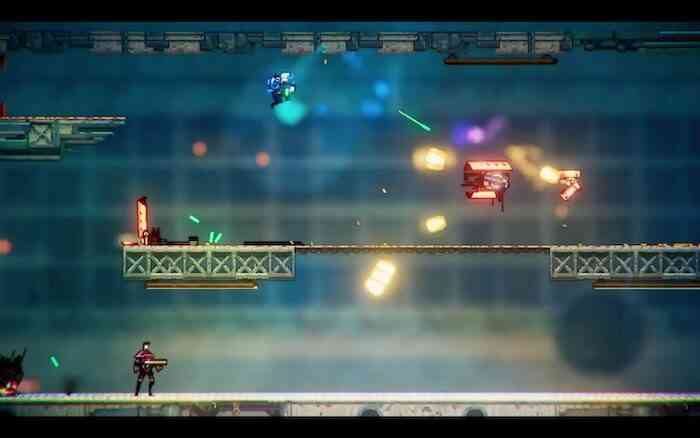 Speaking of the tower, Black Future’s dystopian setting may the best part of the package.

You’d be hard-pressed not to be immediately sucked in by Black Future’s aesthetic.  The pounding synth-punk soundtrack and gorgeous retro visuals had me smiling from ear-to-ear within the first few minutes of my very first run.  This game bleeds the personality it tried to build, clearly establishing from the moment you start that this isn’t going to be your average roguelike.  The music did such a fantastic job of wrapping me in a warm blanket of 80s nostalgia, I would often get the feeling of wanting to just ride off into the sunset with the top down, the wind through my hair, and this soundtrack as my passenger.

I can talk all day long about how the effects are gorgeous, but you really need to see the game in action to experience this yourself.  Gunfire, enemies, and explosions all create a nearly never-ending firework display to navigate through.  Colors brilliantly pop, and enemies explode in a satisfying heap of rubble as you blast them to bits, and it never gets old.  I’d say this is why I’m as hooked as I am – the music, the visuals, the sound effects, the controls, everything is sewn together into one of the most satisfying gameplay loops I’ve experienced all year. 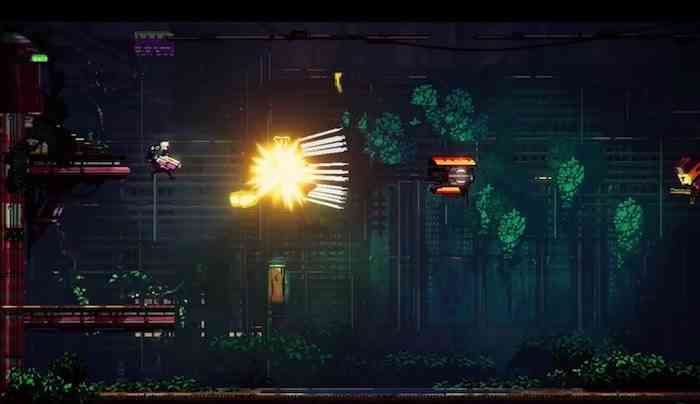 The other reason, though, that I’ve appreciated this game so much is the fact that with each run, I do feel like I’m making real, tangible progress.  Going back to Enter the Gungeon, I’d often feel like a deep run that ended in death didn’t truly prepare me for my next attempt.  Black Future, on the other hand, would continuously reward me with new weapons, items, or characters to use on my next playthrough.  Don’t get me wrong; this game is TOUGH and will continue to challenge even experienced players, but with each subsequent run, I felt like I was getting closer to the end.

A Misstep or Two

It rarely, if ever, is all sunshine and rainbows, though, and Black Future ’88 will stumble at times.  The game does a great job of running smoothly, but during the most intensive moments, when so many explosions are happening at once that you can barely see where the background begins and fireballs end, you’ll notice some frame drops.  These were never bad enough to ruin a playthrough, but they did stand out in an otherwise excessively smooth game.  I also found this issue to be a bit more apparent in docked mode.  The game seemed to lag just a little bit more during those major moments.  On top of this, and most frustrating, is that whenever a dialogue box appears, or a character text box, it’s possible for your character to disappear behind it.  I had a few runs ruined by my character being hidden by a text box and taking incoming fire while not being able to know exactly where I needed to jump.

I loved my time with Black Future ’88.  It’s hard, it’s fun, it’s memorable.  In a genre that I have felt has been stagnating a bit over the past year or so, SUPERSCARYSNAKES is here to slap us back into reality.  While it doesn’t wholly redefine roguelikes, it does enough to make it stand in a class of its own.  I’m going to be craving “one more run” for a long time, and I’m going to have that soundtrack stuck in my head for even longer.  This is a great game.  Don’t miss it. 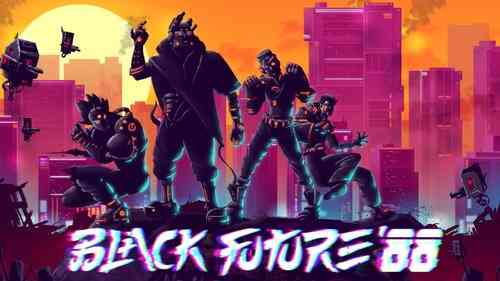