You have to give the developers of Battle Trivia Knockout some credit – they have tried to put a new twist on the same old trivia game model, and add the fun elements of fighting games to the mix.  The game’s title had me expecting an intense contest of trivia prowess that would test my knowledge and strategy skills in new and cool ways.  Unfortunately, the game’s intriguing concept is not executed very well, and when you boil its elements down, Battle Trivia Knockout fails to deliver the decisive roundhouse of fun that many trivia game fans will expect.

Battle Trivia Knockout is from Happy Dance Games, the same people who brought you That Trivia Game.  In the game’s basic design, it shows – the question and answer formats are the same, with four answer options presented to you, and you choose either the square, circle, triangle or X button as fast as you can.  But Battle Trivia Knockout looks to differentiate itself from the pack with a twist – when you get an answer right, you don’t just get points, you get a chance to “attack” your opponent, combat style, and deal “damage” to his meter, which seems to have 1,000 hit-points when it is full.  Deal enough damage, and KA-POW!  He gets knocked out.

Sounds like a fun spin on an old genre, right?  Not so fast, grasshopper.  It is a fun spin, in theory – but, unfortunately, getting a Knockout in Battle Trivia Knockout is rare in practice.  Why?  It’s simple math, really: in order to get a knockout, you need to get 1,000 hit-points on the other guy.  Since there are only 5 rounds in a match, that means you have to hit him for at least 200 per round.  Dealing 200 hit-points in a round is really hard – the game just doesn’t give you enough opportunity to do that.  You get hits by luck, by spinning a wheel or picking a card, and the game is pretty stingy about handing out the big hits.

“It is really for casual game players who want something to do with their friends at get-togethers – and even then, with so few questions, the fun will likely end before the keg is empty.”

Plus, think about it: if you are winning all 5 rounds of the match, you are going to win on regular points anyway.  So getting a knockout will likely be redundant to you.  It is a shame that the supposed centerpiece of Battle Trivia Knockout – the Knockout – is rarely a part of the game.  Without the knockouts, it is not very different from That Trivia Game – and unfortunately, that is not a compliment.  There is a playoff-style pyramid format to each session, in which you eliminate opponents and move up the pyramid to win the Championship.  Again, not a bad idea, except that there are only 4 players at a time, so each “Championship” is a mere two games long.  There just isn’t enough of a feeling of accomplishment when you win a Championship, since you only won twice to get it.

Battle Trivia Knockout boasts 1,000 questions, just like Happy Dance’s That Trivia Game has.  And, just like That Trivia Game, you’ll find that it just doesn’t seem like that many when you play.  I began to get repeat questions just 10 games into my experience – which is the Touch of Death for a trivia game.  The small number of questions is something I have never understood about trivia video games – I mean, they don’t have to build massive, 3D levels, or detailed character models.  Gameplay is reduced mostly to pressing a button.  In a trivia video game, the developer has basically one job: make up questions.  Three people working for a few months should be able to come up with at least 5,000 questions, easy.  What is the freakin’ problem?  I do not understand why trivia video games like Battle Trivia Knockout continue to be put out with 1,000 questions or less – especially when you consider that board games like Trivial Pursuit have 6,000. 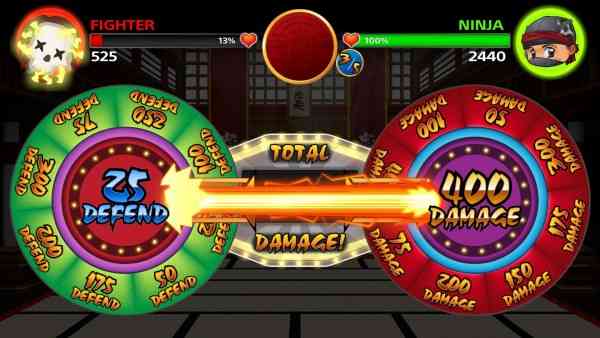 The questions themselves are also of the type that I would refer to as “party trivia.”  Meaning, they are not really a test of your actual knowledge, unless you somehow know facts like “how many dogs there are in the world.”  You are usually meant to guess at the right answer, which I assume is supposed to add to the “zany fun,” and make the game accessible.  It is obvious that Battle Trivia Knockout – like a lot of its trivia-game predecessors, unfortunately – is aimed at people who normally don’t play trivia games, but have a few friends over and want a fun group activity while they drink some brewskies.

The four game modes – Wheels of Destiny, Tiles of Death, Answer Battles, and Wise Wager – are also based on non-trivia related skills.  For example, Answer Battles involves a tug-of-war in which you try to pull the right answer over to your side with the X button.  And in Wise Wager, you bet before each question (an idea familiar to players of Buzz) – since there are no categories, your bet is a complete shot in the dark. Thus, with the Party Trivia-level questions, and modes involving random factors like spinning a wheel or out-button-mashing your opponent, Battle Trivia Knockout will not appeal to trivia game players.  It is really for casual game players who want something to do with their friends at get-togethers – and even then, with so few questions, the fun will likely end before the keg is empty.

“The visuals in Battle Trivia Knockout are one bright spot.  They are pleasant, and opt for an Asian-themed look, which is fun and never gets to be annoying.”

The visuals in Battle Trivia Knockout are one bright spot.  They are pleasant, and opt for an Asian-themed look, which is fun and never gets to be annoying.  A voice reads the questions in a stereotypical Japanese accent, and the backdrops of Training Dojo and other locales add to the Eastern flavor.  The visuals are solid in Battle Trivia Knockout, and there is a playful sense of humor to the look and feel of the game that I enjoyed.  That includes the way your controller emits a martial-arts-style shout whenever you choose an answer.  I would say that the visuals and sounds in this game were better than That Trivia Game.

Here’s a trivia question for you: does Battle Trivia Knockout have online multiplayer?  If you guessed “no,” you win. Or lose.  No, if you are looking to test your skills against other humans across the globe, then sorry, you will be left disappointed with Battle Trivia Knockout.  There is only local multiplayer (but you will need some extra controllers), and playing against the CPU.  The CPU is a decent opponent, and generally gets most of the questions right.  But again, since you begin to get repeats before long, you will soon tire of playing against the computer just like you did against humans. 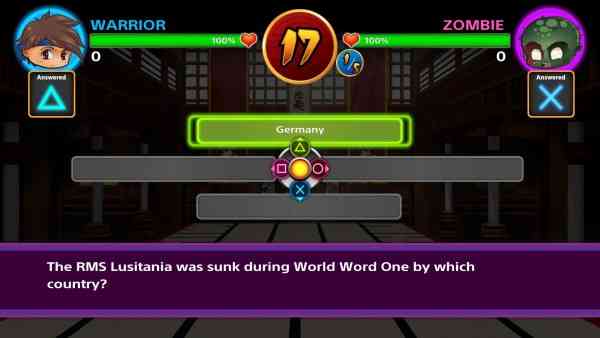 Overall, Battle Trivia Knockout offers some interesting ideas to help liven up the usual trivia game experience, but it mostly fails to hit the right pressure-points.  The Knockout feature would actually make the game super fun, if it was fully-realized.  And the tier system of Championships might have made the fight to the top a real rush of victory, were it deepened.  But, all of those things would make the game harder, and more for serious trivia gamers – and that doesn’t seem to be the audience Happy Dance is going for.  Unfortunately, though, even the casual party-game crowd will lose interest in Battle Trivia Knockout when they start to encounter repeat questions.  No, trivia game fans, this is not the game you have been waiting for.  Skip this one and go play some Trivial Pursuit instead, and let’s keep hoping that a killer trivia video game comes out some day on consoles. 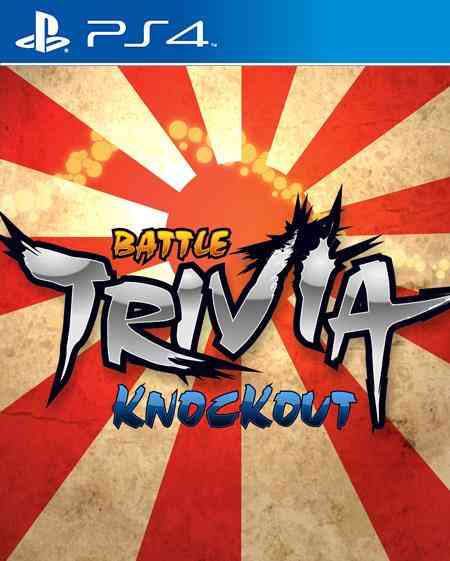