The RTS game, Bannermen, recently had its first official tournament (Congratulations Beastyqt!) immediately following a fairly hefty game patch that added some new content. With all of its tweaks and updates, it looks like Pathos is very seriously on the path to making this an RTS classic.

You play as Lord Berrian, an exiled Lord, recently stripped of land and titles, and you gather your armies and build your base in order to regain your power. There is a campaign story as well as online tournament play with maps to accommodate two to four players. In the campaign story, you learn quite a bit about Lord Berrian as he tries to rebuild his former alliances with people with whom he had parted company after a lost battle with his arch-nemesis, Lord Karthor, who left the kingdom of Valtoria in total decimation. Did I mention that Berrian is quite handsome?

The single-player campaign can be played on several difficulty modes from easy to expert. The story of the campaign follows Lord Berrian as he tries to prove himself worthy of leading an army once more through a series of story quests to eventually take on Karthor once more. The campaign actually works nicely to set a player up for multiple gameplay strategies on both offensive and defensive fronts and I think it really prepared me for actual multiplayer battles.

The controls of Bannermen are simple RTS controls. Click to select, click and drag to select multiples, and each selectable option allows you to perform tasks. In buildings, you train up troops or peons for your town to build individual heroes with special abilities that can be used by selecting them and then targeting those abilities. Some of the abilities are very cool, like Berrian’s shield and AoE abilities. The only thing I found myself wishing was that when I had multiple heroes selected, I’d have access to all their individual abilities in one place rather than having to individually select just to get my archer’s concussive arrows. 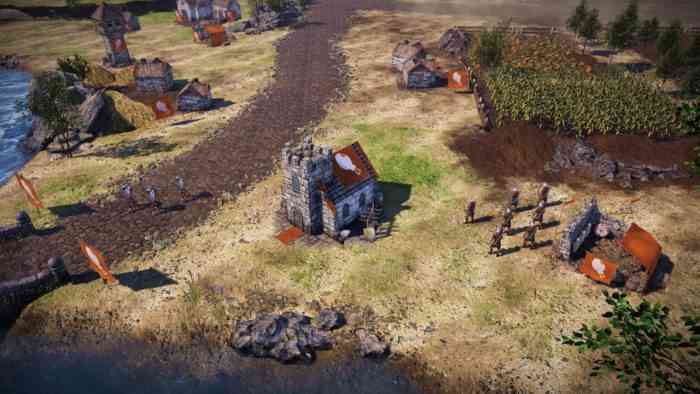 Multiplayer Bannermen was much of the same. Some friends and I created a lobby to test out the gameplay and found the maps to be vast and interesting. They are all varied from each other in appropriate amounts and created good challenges and defensive strategies. Matching is easy; you can select from ranked, unranked, and custom matches. In both game modes, however, the gameplay does start to get stale after a few hours of play.

Bannermen relies on standard RTS graphics that are detailed and immersive. The maps are vast but easy to navigate and move around within. The actual artwork for both the maps and cut scenes had a nice hand-painted look that I believe really added to the effect of the overall game. More importantly, though, the voice acting was way better than any of us expected. Usually, in indie games, the voice talent is lacking, but every character in this game has a script it follows and is acted out really well. We couldn’t help but chuckle at the villagers implying their horrific conditions were wonderful. 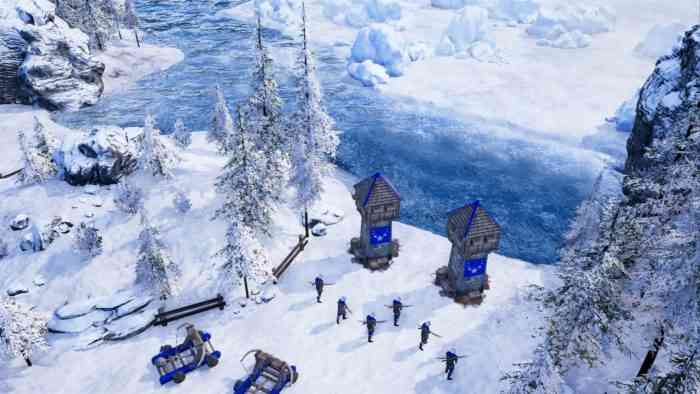 Overall, Bannermen is a good RTS game. It is intuitive and easy to jump into and the campaign is satisfying. The storyline is engaging enough, and Lord Berrian is enough to make any gamer girl swoon. The only thing about it I can criticize is that I don’t think it has anything that makes it stand out among other games of this genre. It has a really good base, but these games are pretty standard and I’d love to see Pathos really push the genre to make Bannermen stand out, as it’s clearly put together by a team who really cares about the project.