Developer Ubisoft Sofia has deftly created a new historical Assassin’s Creed adventure that parallels to some extent the new Assassin’s Creed III on the PS3.  The game comes at a time where once again a Sony handheld system gets little in terms of triple A titles.  I do admit that Sony has supported the Vita better than the original PSP, but still you would think it would command way more attention.  As I started to play I was interested in seeing how the franchise would transition to the PS Vita and if it could live up to the franchise lineage that was started on the bigger consoles.

Assassin’s Creed III: Liberation is set roughly around the time during the end of the French and Indian War, during the years 1765 to 1780 in New Orleans.  Aveline de Grandpré is the games main character and she has a rather interesting background.  She is the daughter of a wealthy French merchant and an African woman.  Her real mother mysteriously disappeared and Aveline now lives with her stepmother. Aveline grew up in a well to-do environment thanks to her wealthy father, and much better than similar children with her background.  Aveline choose to join the Order of the Assassins for the purpose of fighting back against slavery. 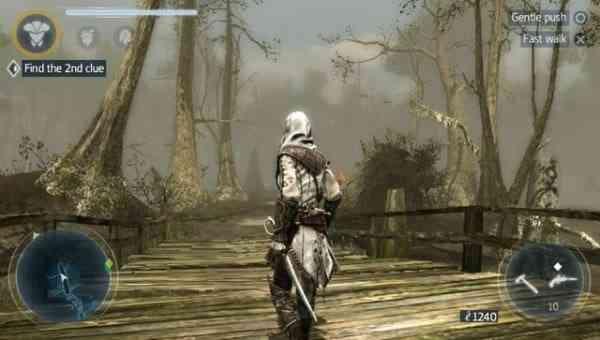 For a portable version of the Assassin’s Creed franchise, and as someone new to the franchise, I found that Liberation is a well-polished and well put-together bit of goodness.  This PS Vita game almost gives you a full console experience, with features and controls tailored to the Vita’s unique abilities.  I must admit there are a few interesting uses for the Vita, such as holding the unit up to the light to decode messages, or tilting the Vita from side to side when solving certain puzzles.  While these ideas may seem a bit gimmicky the end result is highly effective and quite enjoyable.  I did find that I needed to turn down the sensitivity levels for the analog controls as they felt a bit too quick on the Vita’s screen.

Speaking of the analog thumb-sticks, they felt a hundred times better then the PSP’s one analog nub.  Aside from the odd camera angle quirk, the thumb-sticks perform quite well as they smoothly control the game from start to finish.  That is not to say they are perfect as novice gamers will have a bit of a learning curve to overcome, but overall you should have little trouble.  Using the rear touch pad is few and far between, but when the situation presents itself I found it also to be quite easy to master.  Later on in the game Aveline gains the ability to unleash multi-attacks, which requires you to mark enemies with the touchscreen.  The touch surface has its own user interface which pops up the weapon wheel.  It can also help you to enlarge and interact with the in-game maps.  The whole idea looks slick, and more importantly works almost flawlessly.  Again the attention to detail here is fantastic.

Combat in the game is pretty straightforward.  Aveline has the ability to attack with a weapon, kick and counter.  You can mix in long-range attacks utilizing muskets and smoke bombs.  Of course you cannot forger about the blowguns, which is definitely one of my favourites in the game.  Ubisoft has promised a full Assassin’s Creed experience, which from my contextual knowledge of the series is mostly true.  The game’s mission structure, memory sequencing, and syncing are all similar to the console versions of the franchise.  Gamers should be able to step right in and play with very little in the way of learning. 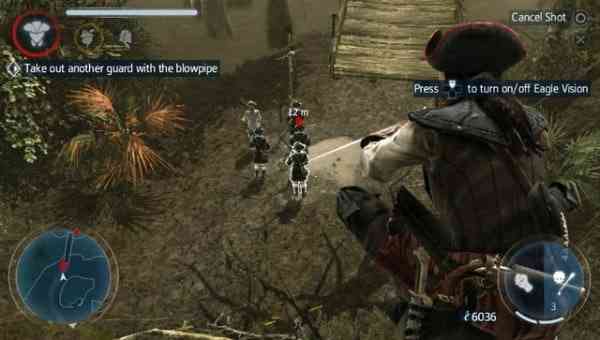 There are definitely not a lot of side-missions in this PS Vita Assassin’s Creed game given the medium, which should be expected.  I like the streamlined story, as it does not suffer from feeling overdone.  Having countless side quests can kill a game.  The pacing in Liberation is almost spot-on.  The other good thing about the concise gameplay is that the missions are not overly long and consist of well placed checkpoints.  It makes “on-the-go” gaming easy and fun.  Load times are also surprisingly quick too.

One interesting, but not necessarily unique, feature in Liberation is Avelines ability to utilize different personas.  As almost any time she can change her clothes and disguise herself as an aristocratic lady or as a slave.  This in turn adversely affects her abilities and how others perceive her.  There are a few missions that require her to be a particular identity, but it usually is up to you to decide.  When Aveline is an assassin she generally has access to most of her abilities and weapons; however, others look her upon with a bit of distain around her because of her profession.  Conversely when she is an aristocrat Aveline wears a frilly dress and hat and her abilities are much less punch and her persona is well liked almost adorned with respect.  Of course both have their own advantages as being charming may get her into areas others could not while being an assassin she can manipulate her surroundings by scaling or jumping into tough areas. Let’s not forget she can also be the slave girl, which gives Aveline the ability to easily blend into crowds and to more efficiently climb and run.  Unfortunately the side effect of being a slave is more suspicious the majority of people around her share negative character opinion.  Aveline’s personas can definitely help along in missions, but you must pick them carefully in order to utilize them to their fullest potential.

The PS Vita’s horsepower is on full display in this Assassin’s Creed game.  I was quite surprised with the quality of the visuals and the textures on screen.  I immediately thought that this had to be among one of the Vitas very best looking titles yet.  The game seems to run at the Vitas native resolution, and has texture work, although sometimes a bit muddled, that can rival the console versions at times.  I was impressed with games environments as everything had an amazing amount of detail and clarity.  The time period is perfectly captured from the outfits, and dress of the day, to even the modes of transport such as sailing ships to the horse and carriages that carry people on land.  These are all depicted impressively.  The cities and more rural areas, such as the New Orleans bayou, are rendered beautifully.  The game does an excellent job of transferring you to this particular place in time. 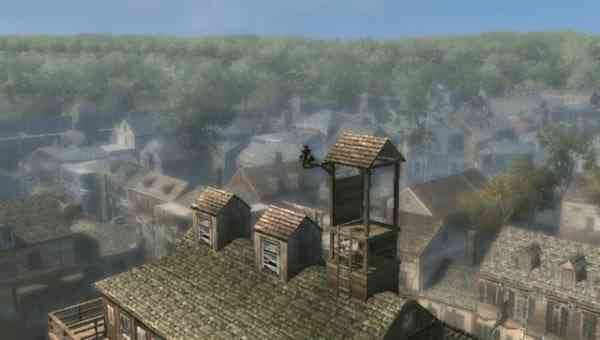 As I began to get accustomed to the game I would climb to the tops of tall spires or buildings just to look at the world below.  The 360-degree view from above is almost breathtaking.  The feeling of height is quite convincing.  Just try to jump down from these heights and you will wince from time to time if you miss your marks.  I also revelled in some of the intricacies of the visuals.  Things like dust whipping up off the dry roads, or leaves not only blowing off trees but just dropping.  Liberation’s attention to detail is very good, which really draws the gamer in.

The animation and various cutscenes are fantastic.  They all share an almost movie like quality and again show off what the Vita can do. I am not even mentioning the beautiful lighting effects, and most important is the rock solid framerate throughout.  In the end I found this game to be a great looking title on the Vita and something that I show to friends who may doubt what Sony’s handheld can do.

Liberation sounds just as good as it looks, with or without the use of headphones.  The Vita’s external speakers do a wonderful job of protecting the games aural flavors.  If you have a choice though I would recommend using headphones as the game really comes alive if you do.  The soundtrack and voice work is simply stunning.  The French accents are perfect, the sounds of different guns are incredible, and the howling wind is fantastic.  The diversity of the games sounds is quite impressive.

Even with the fact that Assassin’s Creed III: Liberation was my first true adventure with the franchise as a whole, I can easily say that this game is a great experience.  I thought the story was interesting enough to hold my attention, and I found that the period piece and all the parts that contributed here made for a game that I wanted to play more.  The rich graphics and fantastic voice work are a couple elements that had me playing whenever I could.  Sure, it has some issues and hiccups now and then, but none that I could really say glared outright.  At the end of the day PS Vita owners who are fans of the Assassin’s Creed franchise, and PS Vita gamers as a whole, would be remiss if they missed out on Liberation, as it is one of the better titles to hit Sony’s twin-stick handheld to date.