The gameplay is much like a traditional Mario title where you work your way through a level while avoiding obstacles like Goombas, turtles and bats, not to mention working your way through the level design itself. The levels have a few key components such as collecting stickers & coins, as well as rescuing Toads that were impacted by the explosion of the comet or who have been terrorized by Bowser.  You will also search for special items that can to aid you in solving puzzles and battling Bowser’s minions.

Stickers are found throughout the levels and are peeled off surfaces by hitting the A button. You can also find them by pressing the B button to swing your hammer to break open boxes and knock over scenery.  Coins can be obtained by winning battles and found hidden in the levels you traverse. Another great way to earn coins is to sell any extra stickers you don’t need which in turn allows you to buy other stickers, special items, and spins on the battle spinner. 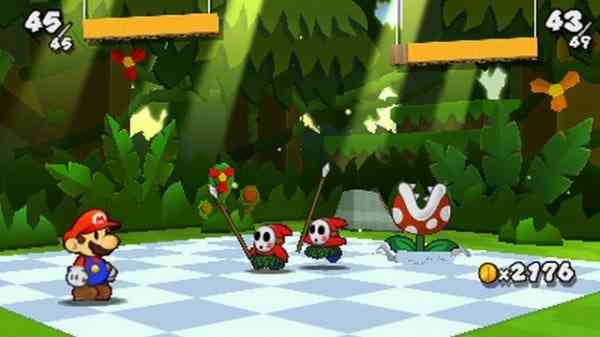 As you make your way through the levels there will be times when Toads need your help to battle Bowsers henchmen, and upon defeating them you usually receive some cool items such as additional album pages or special items. Special items can be transformed into rare stickers and are used in “paperization” mode to solve puzzles or in battle as they are quite effective at aiding you in winning, especially in regards to those hard to beat bosses.

When Mario comes into contact with an enemy he will find himself in a battle arena.  These battles can result in Mario battling up to three opponents because villains never fight fair and of course they may call for backup. This is just for a regular battle as there is the possibility of fighting even more enemies during Boss Battles to add an extra challenge. Right before you warp into the battle arena you should keep in mind that you can perform a pre-emptive strike by thwacking the enemy with your hammer or jumping on their head to gain a bonus blow which lowers their initial hit points.

At the beginning of each battle (beyond the tutorial) there is a battle spinner that allows you to spend a few coins for a spin, which if lucky can give you an advantage within the battle. The battle spinner is a slot type mini-game where you try to match up three symbols for a jackpot and the chance to use three stickers consecutively in battle.  The jackpot usually involves a reward based on the symbol you match.  For example, match three mushrooms and you will receive a health bonus or match 3 fire flowers and Mario will send a fire attack at the beginning of the battle.  If you match less than three stickers you will have the same amount of sticker slots to use as the number of stickers you matched.  Should you have the coins, you can pay an additional fee to give you two symbols automatically matched, and for an even higher price tag you can have the third symbol wheel slow down making it easier to match to the other two. 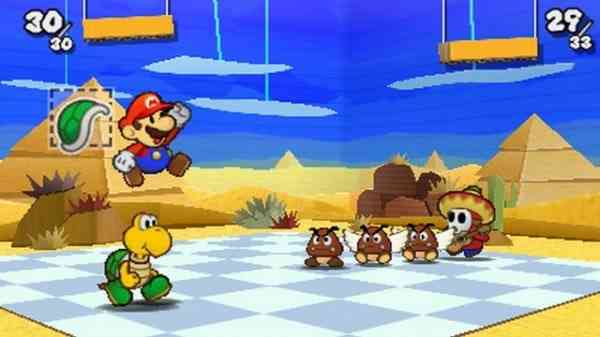 Once you know how many stickers you can use you can then select them from your album. Stickers are peeled off of surfaces throughout the levels or by purchasing them at the various sticker shops.  Each sticker type has a unique strength and ability with the strength of the sticker increasing in correlation to its quality (e.g. a shiny sticker is stronger than a regular sticker).  Opponents will have a range of strengths and weaknesses, and not all stickers will work effectively against all foes, so it is important to know what each sticker you hold can do. The opponents left standing after your attack will have a chance to counter-attack, but if you correctly time hitting the A button you can block their attack reducing the amount of damage you sustain.  After all your opponents have been successfully defeated you will receive either coins or stickers as reward.

A good battle plan is to have a great arsenal of stickers at your disposal due to the sole fact that if you run out of stickers you will lose all of your health and it is game over for Mario. Hitting up a sticker rich level and loading up your album is a strategy that I found was quite beneficial to avoid this fact.  It also allowed me to have an ample supply of stickers to sell off to get some coins for more useful stickers. It also doesn’t hurt to go through the levels more then once to search out for HP-Up hearts hidden throughout levels to increase Mario’s total health.

For completionists there is a Sticker Museum that Mario is enlisted in helping fill up with over 90 unique stickers and over 60 special items to collect. There is quite a bit to do to get this museum full of great exhibits. Another great way to show your progress in the game is through the Achievement Flags that the Toads set up for you in the festival field commemorating memorable moments along your Paper Mario journey. These include such things as finding HP-Up hearts, spinning the battle spinner 50 times, spending 10,000 coins and collecting all comet pieces to name off a few. 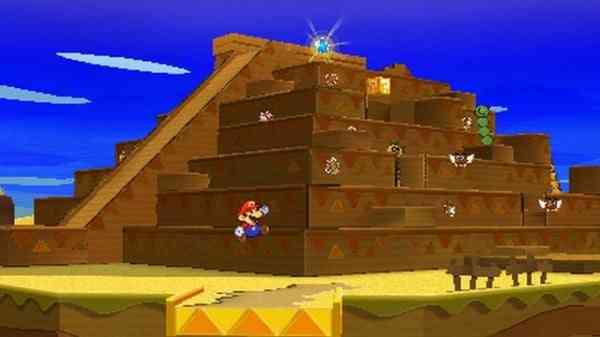 The graphics for this title were great and the “papercraft world” felt as though the levels were an elaborate theatrical stage with creative props, and in some cases they were like a pop-up book just like those I read when I was a kid.  From the bushes that had folds at the bottom to help them stand to the single sheet paper mountains that toppled over like dominos in one level, everything looks pretty good.  Mario and all the other characters are flat paper creations and their actions and movements are well matched to this. I especially enjoyed the Toads who have folds on their heads that would flop in the wind after getting hurt and their melodramatic waterworks when they get upset is charming.  The levels all have unique themes that are nicely designed and incorporate theme specific obstacles (sand in the desert, poison in the poisoned forest, etc.).  A portion of the game requires you to “paperize”. This is where Kersti turns the world into a flat sheet of paper and stops time allowing you to stick stickers and objects back in place. I found this aspect was especially well done. As a personal preference I played Paper Mario: Sticker Star predominately in 2D mode. With the whole concept of Paper Mario being a two-dimensional paper character I didn’t really find that the 3D worked here.  Granted, the 3D did give an added sense of depth to the environments but it did not really improve or create any phenomenal experiences for me.

As for the game’s audio, everything is very standard Mario fare here and fans of the franchise will feel right at home. I think a title that is tied to the Mario franchise would be destroyed if they swayed from the familiar and expected noises.  A good musical score compliments the sound effects and the musical experience as a whole is what I expected from this title.  All in all there is nothing to complain about in this area.

Paper Mario: Sticker Star is a cute and light-hearted title with enjoyable gameplay that has a great puzzle component that is not overly difficult but still calls for some ingenuity now and then.  The sticker museum added a collecting element to the game which I enjoyed as it provided me a secondary objective to the game adding to the overall gameplay experience.  Though Paper Mario: Sticker Star may not be a game that I return to upon completion, I definitely enjoyed it and would recommend that fans of the series and those looking to enter into the Mario universe in a unique way on the 3DS pick this title up. 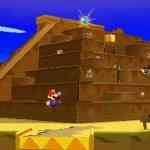 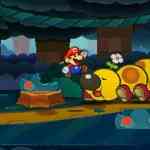 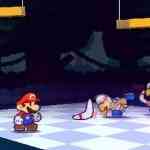 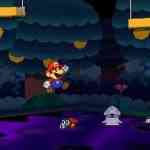 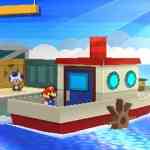 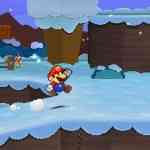 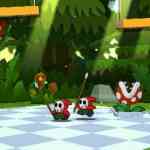 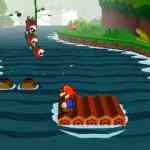 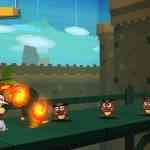 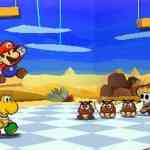 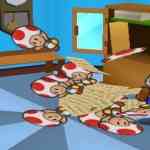