Dating Sims are great, regardless if they’re just cutesy romance or if they get a little more “intense”. You can just sit me down with a cast of characters that my character can smooch and I can play for hours. Arcade Spirits gives me what I want, and even has the fun bonus of being 100% way too relatable at times.

Arcade Spirits is a romance simulator that takes place in the exciting year of 20XX, in a timeline where the video game crash of 1983 never happened. After a string of unfortunate events involving past jobs, you find yourself in the employ of the Funplex – a popular arcade. Not only has your digital assistant IRIS insisted that thanks to her Identity Identifier System this is your dream job – but there may even be romance to be had. You’re completely in control of how the story moves along and the choices you make don’t just affect you, but the arcade itself.

Arcade Spirits starts up with a fairly basic character customization section – give yourself a name, pick an appearance and select your preferred pronoun and off we go… to learn you’ve just lost your job and you’re a little aimless at the moment. This is what I mean that this game can be relatable – I recently just went through the same situation. Unlike my real life though, Arcade Spirits quickly introduces our best friend and roommate, Juniper. I had already in that moment, decided I would romance the pants off of Juniper. Juniper suggests that we download her life coach app to help us get our shit together. I decided that I would take her advice, and am quickly introduced to IRIS, our new virtual assistant, and game tutorial guide.

IRIS explains to us that using the Identity Identifier System (the IRIS developers wanted an acronym but couldn’t decide what to do with the R) you earn points in five key identifiers: Quirky – generally a joke or sarcasm, Steady – a sincere or logical response, Kindly – Gentle and empathetic, Gutsy – Bold, but can be confrontational and Basically – Safe and neutral answers to situations. When you’re conversing with others, you’ll earn a point in one of those five areas depending on the response. You can choose to view or hide what response matches what identifier, with the exception of the Basically responses, which will always be shown. Personally, I went with hiding them, as I like to play dating/romances sims as honestly as possible. Your responses, of course, will also change how other characters feel about you. Unlike a lot of other dating sims I’ve played, Arcade Spirits allows you to boot up the menu and take a peak at where you’re standing with who at any time. 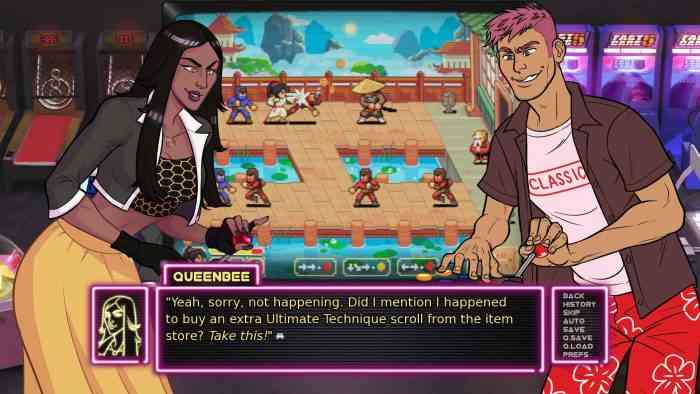 After our tutorial section, IRIS runs a quick job search for us and secures us an interview in half an hour, so it’s out the door we go. We head to the Funplex where we have the strangest interview with the owner, the lovely Francine and, boom! Hired. This is where Arcade Spirits really starts to kick off, as our impromptu first day leads us to meet our coworkers – Gavin the rooted in reality manager, Ashley the aspiring and adorable cosplayer and Naomi the go-getter fixer, as well as some arcade regulars – QueenBee the eSports rising star, Percy the score chaser and Teo the charismatic dancer.  Each of these characters fit perfectly with the type of folks you would meet at any arcade, or general “nerd” hang out.

Now here is where my biggest hang up with Arcade Spirits comes in. I firmly believe in “don’t shit where you eat”. In other words, in real life, I’d never date a coworker or regular of my establishment. Which is a lesson I did learn the hard way. This game puts me in that situation, and for the most part, I want to romance everyone. My own moral quandary aside, the first day on the job sees us handle a kid’s birthday party while getting to know our coworkers and regulars.  During that first day on the job, I felt I was a little cautious with my first impressions and considered my choices extremely carefully – watching my points climb as I interacted with everyone. As I continued to play through though, I started going more with my gut feeling – still not really sure of who I wanted to truly romance quite yet.

I have spent some quality time with Ashley and Naomi so far-but sadly I have noticed there are no special “dramatic moment” scene artworks, like our first kiss or other such relationship type things. There are some NPCs you can’t romance as well, but every character is so well written and charming it will make you wish you could romance them. 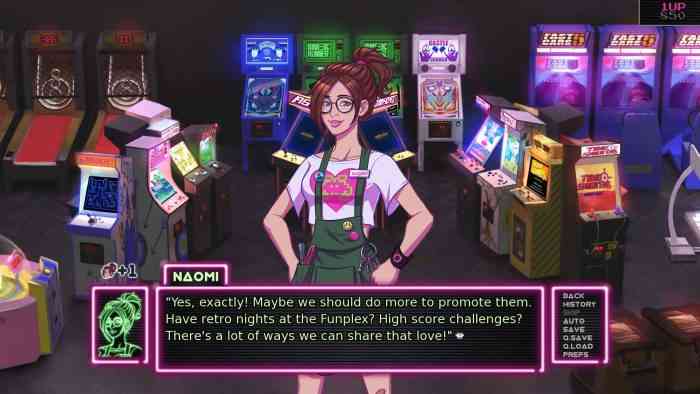 What drew me to Arcade Spirits is the aesthetic and the story. The characters are cute and easy to like, and I love being able to track my status instead of guessing where I stand. Arcade Spirits has an enjoyable story and I will be playing it again until I’ve romanced everyone. It doesn’t really bring any innovation into dating sim world but it is one I can easily recommend. 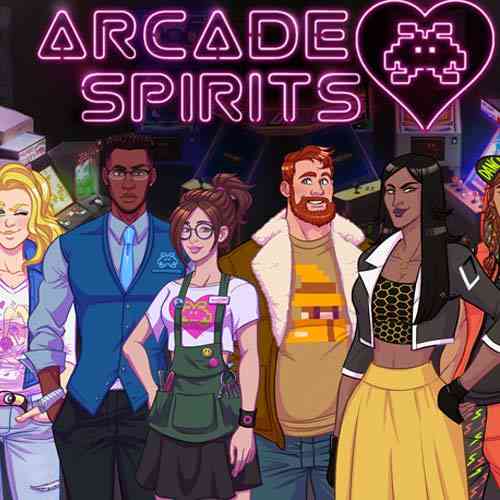