Have you ever wanted to take to the skies in the great blue yonder, traveling through the air as your own boss from island to island trying to cut a little piece of fame and fortune out for yourself? Developed by Blindflug Studios, Airheart: Tales of Broken Wings is a charming twin-stick shooter with a steep learning curve and rogue-like action to propel the game forward. Set in a diesel-punk world, those on the ground are stricken with poverty and so Amelia’s father spends every last resource he has to send her and her alone up into Granaria: the flying city in the sky. Amelia hopes to master the art of skyfishing – a primary form of income in Granaria – and one day take down the legendary and mythical skywhale that no one has ever seen. It’s an amusing premise and fans of aviation, in general, will be drawn towards the name of the game and the protagonist, however, when it comes to gameplay it feels lacking.

I have played a fair number of top-down twin-stick shooters, they can be utterly fantastic so long as the controls are nailed down nicely. Airheart uses the twin-stick scheme correctly, however, it incorporates more realistic flight controls for the airplane itself. This means constantly moving forward and a bit of a learning curve on how to steer. The firing mechanic is simple and doesn’t rely on ammo however it can be a chore to hit moving targets. Stationary turrets are easy enough to destroy but the AI is far better at aiming than I am. The plane comes equipped with a harpoon and this can be used with great efficiency if you manage to snag an enemy vessel. Taking a hard turn while dragging an enemy fighter near some giant rocks results in a satisfying impact that often decimates the ship and leaves some nice scraps to gather.

As mentioned, skyfishing is the primary form of income in Airheart. Various species of flying fish roam the skies and players are tasked with collecting them for more money which can be used to unlock new plane parts and guns. You’ll also collect various scraps and parts which can be used for crafting in lieu of purchasing parts, however there is little to no guidance into how the crafting mechanic works and you’ll be left to figure it out for yourself. Up to five items can be combined to make an item, and each attempt you make you’ll see an indicator if the right item is in the right slot to make something. This makes it a game of memory and trial and error to unlock new parts for more complex crafting of the same variety. 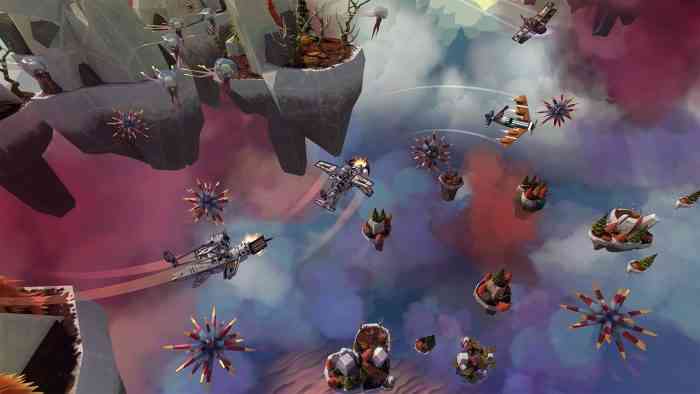 Once you have finished with one level of the map there are terminals you can access to ascend to the next level. Each level has more enemies and fish to collect, so you’ll always want to advance as much as possible. Inevitably your ship will take damage and you’ll want to escape battle to fight and fish another day. With the tap of a button you can descend back to Granaria, starting a sort of minigame in which you must dodge the islands you encountered in previous levels while aiming for the runway. Should you miss the runway, Amelia will crash and you will lose all the parts you have unlocked so far. Should you have your hit points reduced to 0 you will enter a freefall with drastically reduced steering, and this time if you do hit the runway you run the risk of destroying unlocked gear in the crash.

Just Get Me Outta Here

While this is an interesting mechanic to make you more concerned over your wellbeing, I find that each time I rack up a few hundred coins worth of skyfish it isn’t worth the risk of losing them so I have to return to my shop only to launch again and take my time getting back to the level I was last fishing in. This – combined with the less than stellar aiming – make for a much more taxing grind than I was hoping for. Losing all of your gear from missing Granaria doesn’t feel like an appropriate punishment and instead of making it more intense or motivating to keep playing, it’s just off-putting. 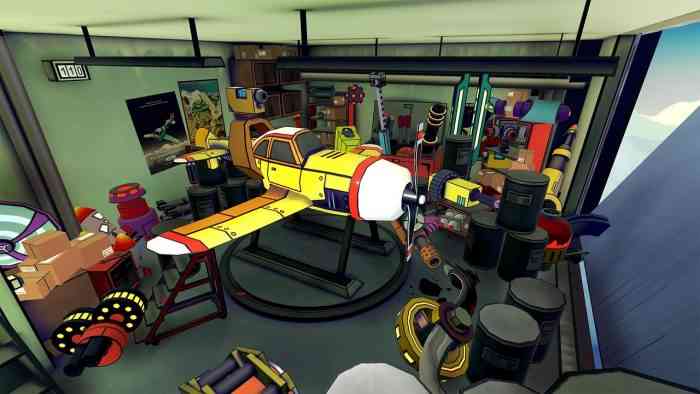 Airheart: Takes of Broken Wings is an enjoyable twin-stick shooter if you are looking for a colorful grind through the skies. With simple controls but somewhat awkward combat, it has a lot going for it, however, Airheart lacks an explanation of crafting and the stakes for returning home are far too high, making it too great of a punishment to be enjoyable. The constant need to return home for health and to save your salvage also slows progress to a halt, and a lack of narrative beyond the desire to make your father proud makes it hard to want to keep going forward. With a few minor additions, Airheart could be so much more but at the moment it’s the bare bones of what should be a great twin-stick shooter. 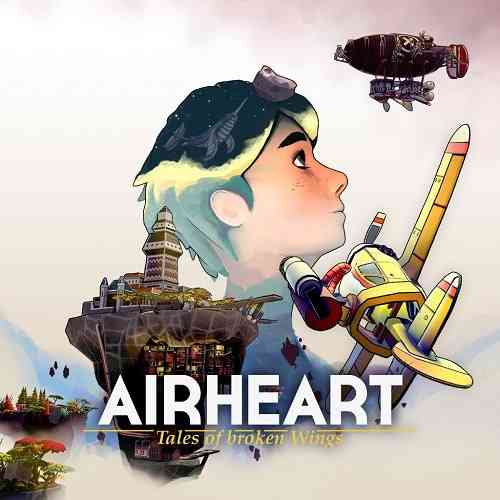