‘Weird West’ Is Exactly as It Sounds, Super Weird

As I’ve said many times, I love it when games surprise me, when a scratch below the surface reveals something unexpected. Not knowing anything much about it, I thought Weird West, from WolfEye Studios was just another top down, isometric action game set in the Old West instead of some high fantasy world. While part of that is true, the humdrum description obscures what might be one of the most interesting games now doing a final lap before release early next year. Weird West is much weirder than you think.

Developed by former Arkane studios veterans and released by — in the words of the developer — their “slack jawed deputy” Devolver Digital, Weird West’s name both says it all and only hints at the content of the game. It’s a third person, real-time, twin-stick shooter-esque action RPG set in a version of the American west that has more in common with Stephen King’s Dark Tower series than Red Dead Redemption at its most historic. That is, it’s a vision of the west filled not just with cowboys, dusty towns and saloons, but werewolves, pig-headed men, monsters and dark magic as well. At first, I thought I was playing just another zombie game ( you know, kind of like Bloodborne starts out like a werewolf game) but Weird West is much richer and more interesting than that.

To start with, its mechanics help create an experience that is unique, fluid and allows for some genuinely creative approaches to combat. While the game’s overall story arc is determined, there are a lot of choices — in both action, sub-quests and dialogue — that the player’s characters can make that shape the course of the game. More specifically, the environment and all the items and structures within it just begged to be toyed with in various destructive ways. Sure, you can just shoot someone with your pistol. But you could also sneakily shoot a lantern from distance to ignite a stack of explosives that does burn damage instead, and then pick off your victim with a gunshot at close range. Of course, we’ve seen mechanics like these in other games, especially in Arkane’s classic titles like Prey and Dishonored, but they’ve really upped the creative potential for creating mayhem and using stealth. As in most RPGs, you’ll also be finding and crafting better weapons, armor and consumables as you move through the story, as well as upgrading your characters with perks obtained by finding relics. I keep emphasizing plural characters, because Weird West takes the player on a journey with five different human and not-so-human protagonists, and they all play very differently. Additionally, choices made as one character impact how the next plays out. 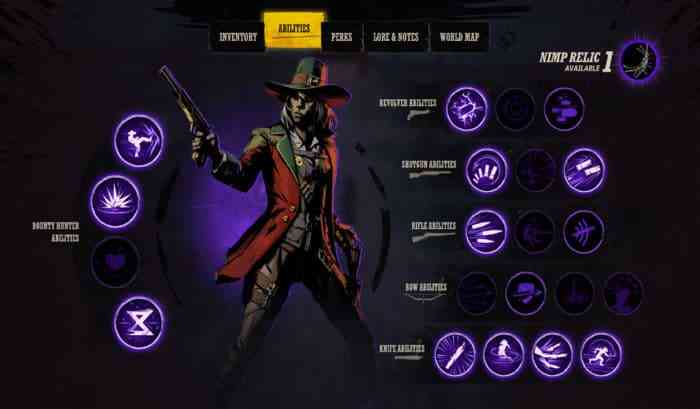 Weird West moves between an overworld map and relatively small natural environments, towns or underground caves for random enemy encounters or quest objectives. Like its mechanical depth, Weird West’s seemingly simple, hand-painted art style is much more detailed and engaging than it first appears. It’s dark in tone but definitely not muted or monochromatic, with effective lighting and a color palette that suggests both the old west of reality, as well as one of mystery and imagination. As you explore and the fog of war dissipates, you can’t help but be impressed by the world that WolfEye has created. Although the ability to zoom in is a little limited, the camera is fluid, flexible and never gets in the way. 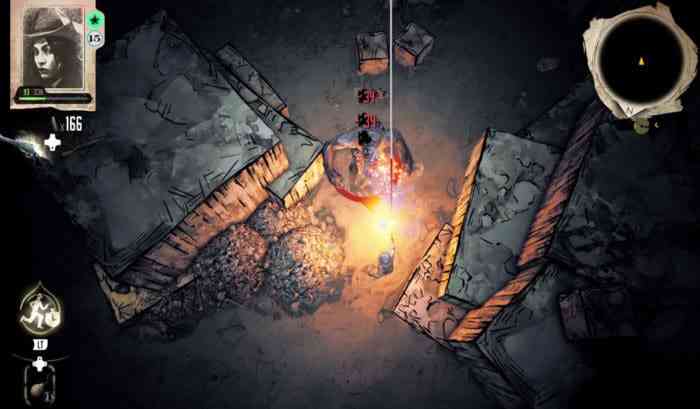 Other aspects of Weird West’s presentation are in tune with its art style. It’s music is subtle, very much in line with the kind of slightly edgy, spare guitar ambiance we’ve come to associate with westerns. Although there is a narrative voice over, dialogue is not acted but he story is interestingly written and told, with touches of humor to leaven some pretty dark and grisly moments. Overall, there is a richness to Weird West’s gameplay, mechanics and aesthetics that, while maybe not surprising coming from a team of experienced developers, keeps the player solidly engaged in the experience.

“Zombie western” is not a new idea, but Weird West takes that kernal of concept and expands, elevates and enriches it to something much more interesting and unique. I enjoyed just about every aspect of Weird West’s gameplay and its intriguing characters and story, and look forward to the game’s final release on January 11, 2022.

***PC code provided by the developers for preview*** 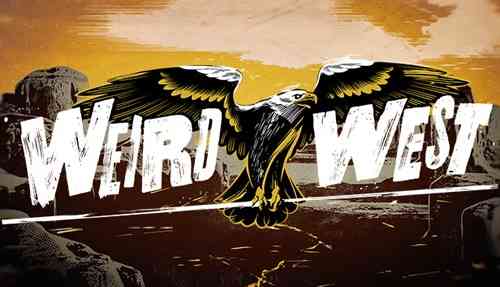 
No More Heroes 3 Review – Just Shy of a Touchdown