Wandersong Plays to its Own Tune

The next time a concerned PTA mother tells you that video games are too violent for children, send them over to Wandersong. This upcoming game by Greg Lobanov is a little bit like what would happen if you took the art style of Steven Universe and combined it with a version of Link who only used his ocarina to solve problems. You play as a little bard who lives in a universe created by a so-called benevolent deity who thinks it’s just about time to start over with this world (because humans are, you know, humans). You, as the little bard, must convince her otherwise…with the most incredible song ever, of course!

Sure, songs that shape the universe have been seen before, but Tolkien’s The Silmarillion is never quite so colorful or joyful about it. In the demo I played, the little bard you play as is delightfully cheerful as he navigates an equally vibrant world, and the characters’ dialogue is flippant, casual, and very funny about the fate of the world that feels wonderfully fresh in a medium that seems constantly dominated by fire-and-brimstone narratives. The game isn’t meant to get more difficult, but rather plans to showcase the unfolding story with its spirited and lively graphics and characters, and it looks like it’s going to do just that. 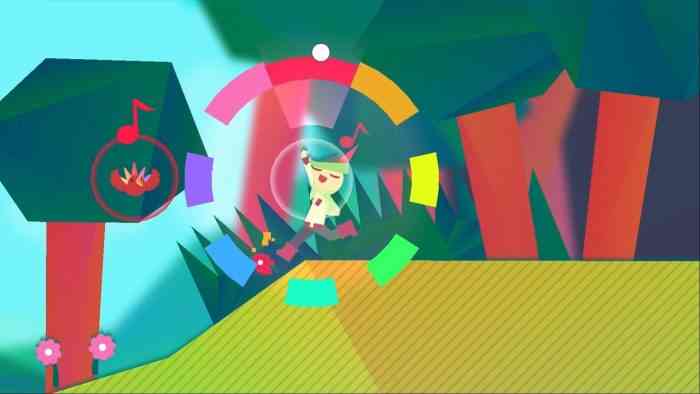 Mechanically, Wandersong is easy to pick up. The gameplay revolved (for my demo, at least) around copying the short little tunes that birds or trees or mean old ladies played with a color wheel of music to access the next area of content. I found the wheel a little tricky at first, but considering how comfortable I felt with it after ten minutes, I’m sure that it’s easy to use throughout the twelve hours that the game is estimated to last.

The demo was unfortunately rather short and didn’t offer much interaction with the world around me (I chose not to bully the grumpy old lady who knew the song I needed), but I can sense that they’re there and that the demo is only the tip of the iceberg. The calming art style, unique story progression, and fun song mechanics will not only appeal to children but to adults who just want something a little different after a long day at work. Recently announced to release on September 27th, Wandersong is coming sooner rather than later and is worth checking out on PC, Mac, and Nintendo Switch.

Century: Age of Ashes Devs Delay Launch to Avoid Battlefield 2042 Frenzy
Next Soundfall Is a Twin Stick Rhythm Game I Didn’t Want to Stop Playing
Previous No Better Blend of Love and War Than ‘Boyfriend Dungeon’ from Kitfox Games