Rogue Legacy 2 Preview – Keeping It In The Family

Precision jumping, pixel perfect dashing, there’s nothing like a perfectly tuned 2D platformer. The original Rogue Legacy is one of those games. One of my favorite games this generation and quite possibly the game I’ve logged the most hours on in total, it has a magical formula few games have even come close to imitating. It’s challenging, yet relaxing. Repetitive, but somehow satisfying. The follow up release – Rogue Legacy 2 – has a lot to live up to. Though it’s just entered early access, things look to be shaping up very nicely indeed.

The structure is relatively simple. You’re a valiant knight, and there’s a castle full of baddies, treasures, and mysteries to be conquered. But the castle is not just your burden to bear. See, when you die – and you will – your descendants are cursed with finishing the job you started. But the castle they tackle won’t be the one you perished in. Good thing you’ll have a slough of upgrades, runes, and equipment at your disposal to make the task more palatable.

The ancestry mechanic is perhaps the most interesting wrinkle carried over from the first Rogue Legacy. You pick from a handful of randomly generated options, each of which has a class, and quirks. Some see the world in the Game Boy palate, while others are flaming narcissists who overestimate the amount of damage they’re dealing. It’s often a hindrance, but it’s part of the series’ charm. I never put that much pressure on myself to have any single run be THE ONE, which makes each moment oddly soothing. Sure, there’s breakneck, skin of your teeth action around every corner, but the stakes never feel overwhelming. 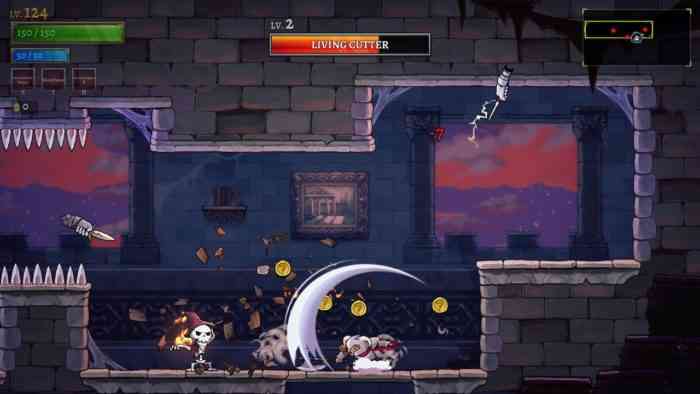 That’s a curse too, since a sense of purpose is a necessary ingredient in games. The first game managed that purpose through boss encounters and a steadily increasing enemy difficulty. It seems like Rogue Legacy 2 will follow that structure, though the amount of content on tap as of now is quite limited. There’s just the one section of the castle to see, for instance. Still, there are a few mechanical changes that stand to make this sequel more diverse than the original. The air dash is now a permanent unlockable, no longer taking up room in your loadout, while a new air spin move lets you bounce off lanterns ala The Messenger. Both up the traversal ante, and though the balance feels good now, I fear that adding too many more might make things feel needlessly complicated. The added button tap to recover from damage is one frill I could live without. To me, the beauty of Rogue Legacy was in stretching the very few options you had well beyond their intended purpose.

Things look and feel much as they did in the previous game, but with a whole schwack of extra polish. Environments and characters are infinitely more detailed here, and interact with the environment in much more believable ways. Mercifully, the devs have resisted any alteration to how the game handles. The precision is almost Mega Man-esque. Even new additions like the Ranger class both fit in well and feel great. 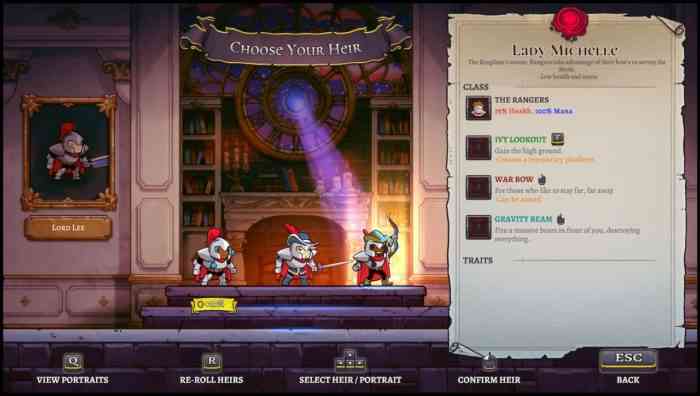 Where I’m struggling is with progression. A constant sense of pushing forward is kind of what kept me returning to Rogue Legacy, and being in early access… Rogue Legacy 2 doesn’t have that same depth of content to explore. Not yet. Maybe that’s more of an early access complaint than anything. Despite being light on content, there’s a lot to like in Rogue Legacy 2. It keeps all the best parts of the original game while adding in enough newness to feel like it’s own thing. The question now, is what does the rest of development look like? What’s the plan for 1.0? We’ll have to wait to find out, but I know I’ll be checking in on this one regularly.

*An Early Access key was provided by the Publisher*

Take Aim, Relax, and Pull the Trigger on Sales – The Top 10 Amazon Game Deals of the Week
Next Dirt 5’s “Playgrounds” is Creative and Will Keep You Coming Back
Previous Become Terror: Hands-On With Outrider’s Fourth Class – The Technomancer