Rogue Heroes: Ruins of Tasos is the Zelda-Like RPG We Need Right Now

If you’ve got that itch to go out and explore dungeons, slay horrifying (but also kinda cute) monsters and maybe even save a town full of people while you’re at it, Team17 and Heliocentric Studios have a treat for you in Rogue Heroes: Ruins of Tasos. I’ve had a chance to check out the game, which comes out later this year on Steam, and I’ve seen a lot to like. I’m not sure I’ll ever love that harsh and unforgiving rogue-like ethos, but there’s so many other positives that I think this one is going to please a lot of RPG fans.

First off, Rogue Heroes: Ruins of Tasos looks just lovely. I’ll be honest, I’m getting a bit cynical with all of the “retro” visuals we see these days, especially with Indie games, which I am starting to feel like are just a cover for poor, blocky graphics and simplistic design. But Rogue Heroes: Ruins of Tasos just crams so much quirky and interesting detail into its 16-bit world that it won me over. Clearly inspired by the SNES Zelda, the overworld has a huge map that’s alive with flora, fauna, towns, dungeons, monsters, and so many other things that exploration is a pleasure. There’s creativity in the monsters, too, that I’ve rarely encountered in roguelikes I’ve played before.

Death is Only the Beginning

That’s even more true in the dungeons, of which there are 5 you can explore. Rogue Heroes: Ruins of Tasos combines procedural generation with hand-made elements, so exploring dungeons always has the joy of mystery and surprise, but things aren’t so random that it feels haphazard in its layout. I enjoyed dungeon crawling in this game more than I usually do — even if it gets damn hard, as roguelikes always will. Using my left mouse button to slash at my enemies, I soon found myself in almost a bullet-hell situation, with skeletons shooting arrows at me from all directions. You also have to use some strategy because your sword has a cool-down meter that makes mindless hack ‘n’ slash a no-go. So yeah, death is always a likely possibility. And having to start over upon death has never been a favorite element of this genre for me. 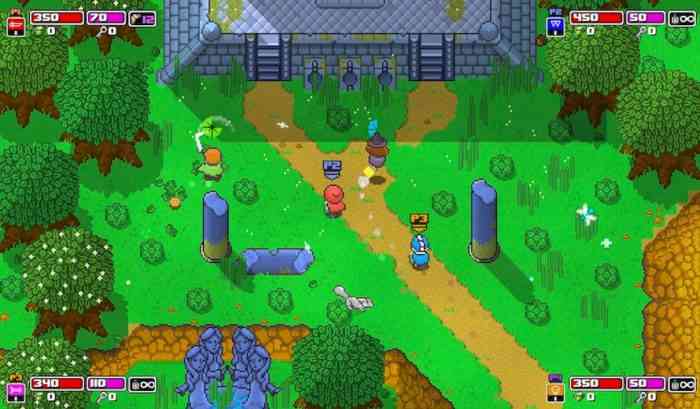 Dungeons are hard, but they are interesting and fun, if you have the patience to stick with them. There’s puzzle-solving to do along the way, secrets to find and boss battles to overcome. You have a shield which you must use at times to fend of ranged attacks, and other things like throwable weapons add more and more complexity to Rogue Heroes: Ruins of Tasos. It’s not an easy game, to be sure.

At least you can earn gems, though, and upgrade so that next time you retry a dungeon, you’re a bit stronger. Gems also allow you to improve your home village, which gives you the ability to upgrade your character. And you get to keep anything, like weapons, that you unlocked in your last playthrough. Plus — and this might be the biggest selling feature of Rogue Heroes: Ruins of Tasos — you can team up with up to 3 other players and take on the toughest parts of the game as a team. I was not able to try this type of play-through, but I know that it will increase the level of fun exponentially, and also make it a lot easier to clear the game’s tough dungeons.

Rogue Heroes: Ruins of Tasos is looking like it has a lot of fun to offer, especially if you’ve got a group of 4 friends willing to jump into the action. It’s also enjoyable solo, but just be prepared to die a lot and take good advantage of the game’s village upgrading. A colorful and visually-appealing homage to Zelda, this is a game that also packs in a surprising amount of detail and challenging gameplay.

** A PC game code what provided by the publisher **


West of Dead Review – A Soulful Hybrid in Purgatory

Children of Morta Review – A Lovely, Beautiful Fairy-Tale in Rogue-Lite Form
Next Phantom Covert Ops Preview – Gently Down The Stream
Previous Hellpoint is a Challenging Sci-fi Horror That’s on Point