Let’s start off with some truth; I was not a fan of the first Mount & Blade game. Admittedly, I never played any of the expansions, sequels or spin-offs, maybe one of them would have been more appealing to me. However I do know there is a huge, rabid following for Mount & Blade – so it wasn’t a fault of the game, it just wasn’t a game for me. So, I wasn’t quite sure what to expect when I was set up for a meeting with TaleWorlds Entertainment to discuss Mount & Blade II: Bannerlord. Needless to say, after that hour long meeting, I was pleasantly surprised and honestly can’t wait to get my hands on the full version.

Mount & Blade II: Bannerlord is a vast action game filled with epic battles and hand-to-hand combat. There isn’t a story, per se, the story is more about the journey you choose to take. One of my criticisms with the first game was the steep learning curve and lack of direction when you first start playing. The developers realized this and have introduced a set of objectives that you’ll work towards completing when you first start the game. Each objective is designed to introduce players to different game mechanics, which should do a better job of easing new players in (and re-introducing returning players).

During my playtime, I was given access to a hand-to-hand combat arena and three of the epic battles (one of the three was simply a more challenging version of one of the other two). The hand-to-hand combat seems substantially improved from the first game. While visually, this area wasn’t anything overly special, the actual gameplay was quite fun. One or two AI-controlled combatants would enter the arena with me; sometimes they’d team up against me, sometimes they’d team up with me against another AI combatant. I could pick up weapons and shields off fallen foes – the developer even gave me a hint; grab a second shield and it’ll be strapped to my back, protecting me from attacks from behind. The combat seemed easy enough and I was able to kill a handful of combatants without much issue. 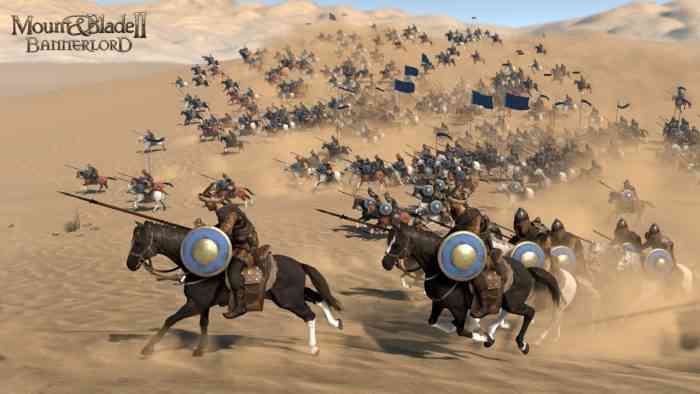 The next mode was the epic battles where I, on horseback, would command my troops to attack and kill the opposing army. Killing the opposing army’s three generals would earn me the victory. During each of my matches, I only earned a few kills myself, but I was able to command my troops to victory each time. In fact, during the last playthrough (on the harder difficulty), I actually died – but I could watch my troops finish off the rest of the opposing force and earn me the win! Visually these modes were awesome, especially the one taking place in the vast desert. There were at least 100 soldiers on the field at any given time, and the game never showed any bit of slow down. It was very impressive. Previous Mount & Blade games had multiplayer modes and this version will continue that tradition, including these epic battles with anywhere between 100 to 200 players at any one time.

Mount & Blade II: Bannerlord does not currently have a release date, but will probably launch in 2018. The game will initially launch on PC, but the developers are hoping to also release the game on consoles as well.