Iron Harvest Preview – A Brutal War Worth Fighting For

It’s hard to glance at a game like Iron Harvest and see anything more than a neat looking steampunk RTS game, but it takes very little digging into this wholly unique world to see that there is far more going on than you might expect. Iron Harvest doesn’t simply let you wall up a base and command the map with an overwhelming army but instead makes each and every moment one that requires your full and total attention.

The series is based on the work of Polish artist Jakub Różalski who created a number of beautiful works of art known as the World of 1920+. Jakub imagined an idyllic setting in Eastern Europe with farmers and a quaint countryside life blended with harsh and advanced development in the industrial age. Jakub was initially approached to make a board game based on his artwork which became the critically acclaimed Scythe, however this same content was adapted into Iron Harvest. Jakub brings the dark, heavy, cold tones of European war to the game, and while I often revel in amassing armies of devastation in RTS games, Iron Harvest doesn’t let you get too comfortable at any point.

Intense Realism I Never Expected From an RTS

I had the pleasure of not only exploring the open beta of the game to play as Polonia – the Polish rebels fighting for freedom – but I was able to play a few missions as Saxony – the German faction of advanced engineering. Immediately I could tell the difference in their play style which was heavily reflected in their respective narratives; Polonia’s technology is simple and functional, but its strength lies in its infantry and ground troops. They easily outnumber the other factions, and when you have a nigh unstoppable bear as a medic (thank you Wojtek) you stand more than a slim chance at defending your country. Saxony, on the other hand, employs a number of incredibly powerful mechs, built with the finest engineering. While their ground units seemed less than adequate, the sheer firepower of their machines vastly outweighed it. I particularly love the Saxony hero mech Brunhilde which, for all intents and purposes, is essentially a high power steel ship loaded with cannons on four legs. They are innovative conquerors and their mechs are not only gorgeous to behold but incredibly fun to control. Whether you like it or not, Saxony truly feels like the superior military. 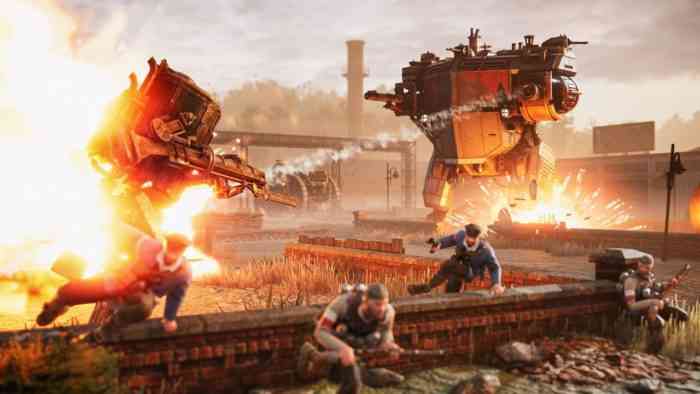 The first few missions as Polonia introduce you to the mechanics, but playing as Saxony really put my skills to the test. Despite being a major opposing force to Polonia, Saxony really does see themselves as the good guys. Their hero units are ones you can relate too (although Wilhelm can get on your nerves.) Iron Harvest offers plenty of places for your units to take cover to try and stay alive and you absolutely need to use every possible tactic to your advantage. A stand up firefight is one of the worst ideas in this game, but thankfully hovering over cover will automatically show you precisely where each unit will take refuge. Units can also occupy abandoned buildings for additional cover – just watch out for them getting blown down while your men are inside. The narrative did pick up into a somewhat formulaic story but with enough twists that the final campaign is definitely going to be interesting. I can’t say I was a big fan of the voice acting and the cinematics felt incredibly dated, especially compared against the game’s impressive in-engine graphics.

Everything in Iron Harvest is destructible. Grenades and exploding mechs leave craters. Buildings explode, fences collapse, vehicles leave treads. When a mech is damaged, the level of detail on its broken parts are incredible and quite easy to inspect thanks to a camera that not only zooms, but has full rotational capabilities. The detail doesn’t stop there, either. Fleeing troops will vault over cover rather than walk around it. Infantry can pick up weapons of defeated enemies and change their class based on the items discovered (grenadier, engineer, etc.) and each unit is able to rank up based on completing its core action, unlocking not only better stats but new abilities to enhance them in the field. These sort of features make you not only play the game with more strategy, but can make you care more when they fall in battle. 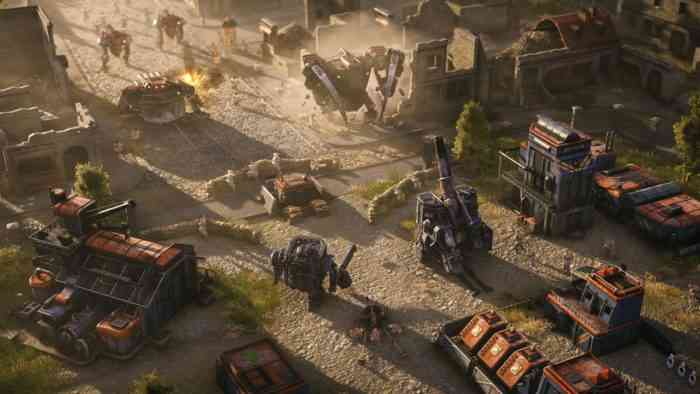 There are only two resources: Iron and Oil. Gone are the days of building depots and training miners to gather the resource on a loop. Instead, you’ll need to eliminate enemies in the area and commandeer a resource depot like capture the flag. As long as you own one of these silos you’ll automatically receive the resource every few seconds, so the more you have the more you earn. This means you need to wager if it’s worth leaving a battalion to defend the depot and keep it allied to your side or not. I loved this mechanic as it made managing the map even more vital than something like StarCraft or Age of Empires ever did. Engrossed deep in combat, you need to move as quickly as you can. Units are set with a whole host of dialogue to offer during the game, including witty banter. The best use of these spoken lines comes in the thick of battle. Units under fire will jump on the radio and call for help. Some will call out that this is the end. While you are trying to get them out alive, the in-game comms are flooded with desperate soldiers searching for help and it does a hauntingly beautiful job of recreating the horrors of war.

The combination of real-world history, the fantasy of advance war machines, and the necessity for employing intelligent tactics and constantly paying attention to a smaller number of units makes Iron Harvest drive home the reality of war. It feels all too real and for those who aren’t experienced in RTS games, you’ll probably fail missions more often than you might care to admit. I only got to scratch the surface of what Iron Harvest has to offer – not to mention a few nods to other factions seen in the Scythe board game – but what I got to see was a truly intense RTS that commands every iota of your attention at all times. The AI is intelligent and responsive, the enemy is ruthlessly aggressive, and every second counts. I can’t wait to see how the war between Polonia, Saxony, and Rusviet plays out.