In a world where the internet is populated by advanced AI systems, glitches threaten to destroy everything. It’s up to a team of capable and totally not adorable, cartoony characters to save the day. Except they are in fact adorable, cartoony characters, and this is a wonderfully wholesome game. Glitch Busters had me smiling from start to finish, running around the brightly colored landscape and having the kind of fun you would expect from an interactive Saturday morning cartoon. It’s a couch co-op shooter with just a little Mario Party shenanigans thrown in for good measure, and it really is as good as that sounds.

Developed by Toylogic, Glitch Busters is a third-person shooter set within the internet itself. The internet itself is made up of various AI programs and glitches are bound to happen. These tend to gum up the works and generally cause chaos and disarray. That is where the Glitch Busters come in. You’ll play as an emoji with a classic cartoon magnet for feet with disembodied hands to hold your weapon of choice. Offering one to four players, you’ll explore each stage and platform through funny puzzles while blasting glitches and goop with your weapon of choice. 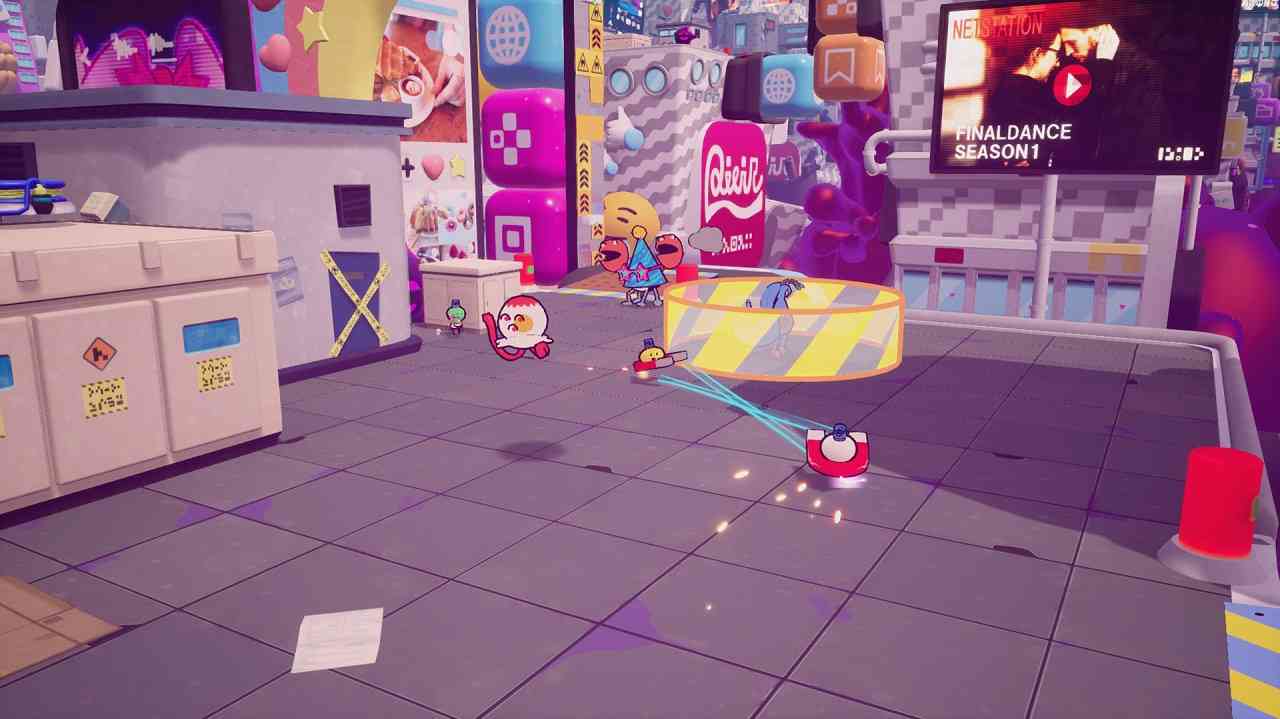 You can carry one weapon at a time with unlimited ammo, lending opportunities for varied gunplay among the team. As soon as I got my hands on a rocket launcher, I knew what my favorite weapon was. There is something strangely satisfying about a little emoji gleefully blasting away with rockets. Players earn coins as they progress through the stage which can be used at shops to get more health, buy weapons, or saved for later to unlock customizable features. These include changing your emoji’s face to one of the many classic faces we all know and love or adding patterns to your magnet legs. There are also a whole host of accessories for hats, glasses, and more to make your character stand out.

Glitch Busters Introduces Fun With Magnets Inside The Internet

So why magnets for legs? This simple yet brilliant design lends itself to a lot of unique features. The most obvious is being able to walk vertically up special magnetic walls. Second, players can jump on top of one another to create a tower. The player on the bottom controls mobility while those above can shoot. Anyone in the stack is able to extend their legs and stretch to increase their height, so if everyone does it, you get a huge stack of characters for reaching new areas. You can even choose to throw everyone above you off of the tower. When playing with AI allies, quick button presses will call them to you and help you make the formation for whatever is needed. My favorite feature of these magnetic feet has to be magnetic sliding.

While running around the stage causing mischief, Glitch Busters can choose to magnetically connect themselves to one another. This creates a brilliant blue bolt of electricity between them. While in this state, players can wildly swing left and right on an arc determined by the distance between their allies. It is significantly faster than walking and a phenomenal way to get around the stage; it’s even a necessity for attacking certain enemies. Drifting around a stage, sliding for a better angle, and launching yourself for the sake of a laugh is very easy and fun. 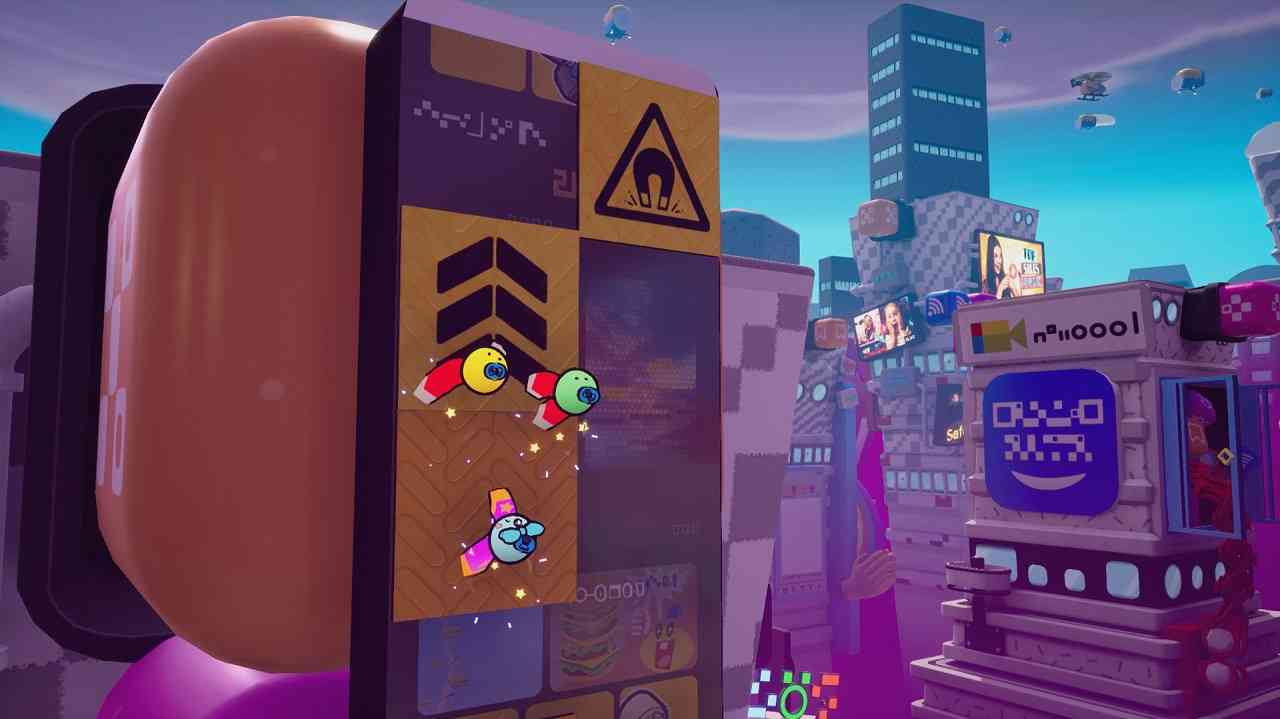 The puzzles I encountered along the way were smart. They made great use of the mechanics and theme of Glitch Busters in a way that made solving it feel natural. There is a strong sense of nostalgia in playing couch co-op because it has that simple pick-up-and-play style that we just don’t see much of anymore. that being said, Glitch Busters is going to have a very robust system for multiplayer. It allows for couch co-op, online co-op, two players on one Switch each using a Joy-Con, and linked Switchs for even more.

Glitch Busters features one additional game mode I got to check out which really had that Mario Party feel. Strictly played as a side-scroller, players are stacked in a tower on top of each other on a platform. Constantly moving forward, there is no moving left to right. Players can jump, extend their legs to stretch, and shoot directly in front of them. So what is the catch? Obstacles sporadically line your path, and the ceiling isn’t particularly high. You’ll need to coordinate with friends as the impending collision approaches, negotiating and planning who will stretch their legs to help their allies avoid getting hit. You also need to keep an eye on moving enemies and make sure you take them out before they get too close. You can change your position in the tower with a quick button press which just makes for even more chaos as you try to survive until the end. It’s easy to sabotage other players, extending your legs and forcing them to collide with a rock for the fun of it. 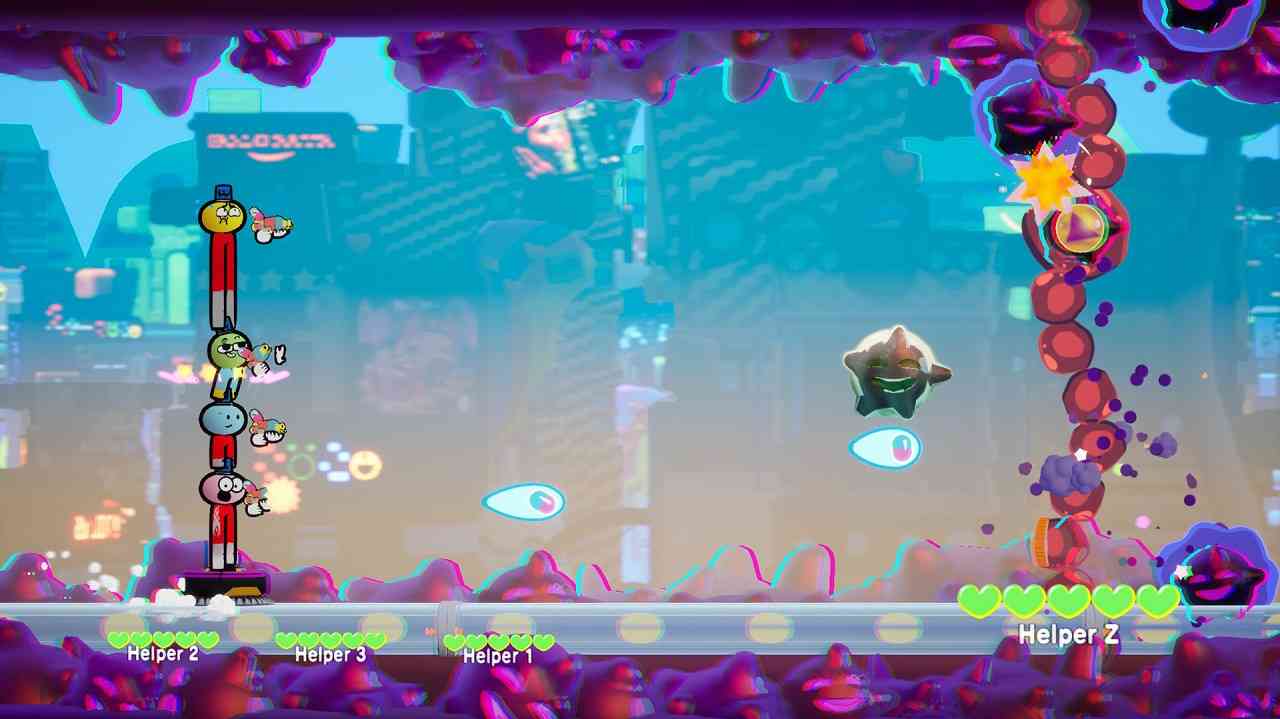 Glitch Busters does not yet have an official release date, but it will be launching on PC, PlayStation 4, and the Nintendo Switch. For more information, check out the game’s official website. 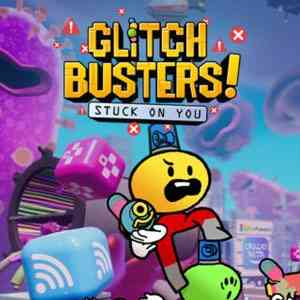