Frostpunk is a city-building, society survival game originally released for PC last year by Poland’s own 11 bit Studios. The game is centered on a group of survivors trying to stay alive during a terrible ice age and the difficult choices you must make in order to keep your colonists alive and your society running smoothly. We sat down with 11 bit Studios’ Project Lead/Senior Lead Designer Jakub Stokalski and Marketing Director Patryk Grzeszczuk in San Francisco for a firsthand look at Frostpunk: Console Edition, and though it’s fairly uncommon to see city-builders supported on consoles, the experience looks pretty fantastic and very true to the original.

Frostpunk: Console Edition is so much more than just a port. Rather than slapping the same game onto a new machine, the gameplay has been reworked to better fit handheld controllers and enhance the console experience. Radial menus are heavily utilized and a virtual cursor has been implemented to allow players to quickly move through the many customization options and information menus. The cursor also snaps to different objects to streamline the building process, and the camera has been reworked to enable more viewing and building flexibility.

The console edition feels natural both in its controls and in its user interface, and it looks incredible on the big screen too. The powerful, steampunk-inspired artwork and graphics look gorgeous, especially when character portraits are displayed in the choose-your-own adventure style conundrums the game presents you with. Everything about Frostpunk: Console Edition is completely smooth, and it seems like a perfectly ideal way to play the game. 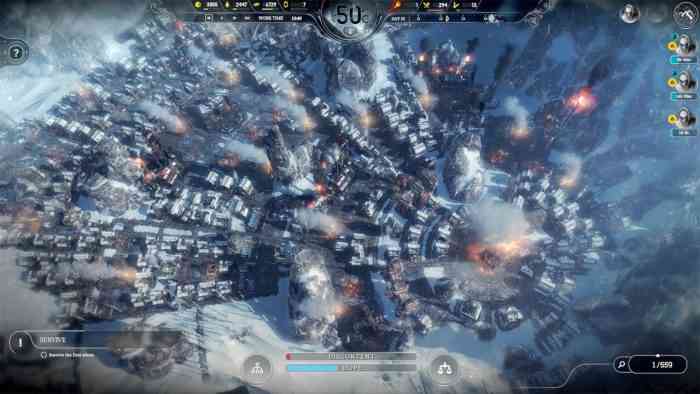 The console versions will feature all of the same content as the PC version, down to every last setting and mode. All content that has been released thus far on PC will automatically arrive with the Console Edition, and the game is slated to arrive on consoles this summer.

To see our full review of Frostpunk on PC, head over here.

Clea 2 Review – A Test of Skill and Courage
Next Barotrauma Is a Sci-Fi Submarine Sim That’ll Make You Panic
Previous Code Vein Has Comically Large Breasts, Melodrama and a Proper Dose of Soulsborne