Code Vein Has Comically Large Breasts, Melodrama and a Proper Dose of Soulsborne

If Code Vein’s network test proves anything, it’s that this title is pretty much exactly what it looks like on the surface — a Soulsborne game dropped in a vat of anime paint. Halfway through my playthrough, I had already lost count of the number of anime tropes on display. Comically large breasts, melodrama, you name it. But that doesn’t mean Namco Bandai’s action RPG is a mere clone. By making a few seemingly small changes to the tried-and-true formula, Code Vein might just be able to carve out its own niche.

In the post-apocalypse, humans have become vampires in all but name. They require “blood beads” for survival, and the search for this limited resource is what initially drives the plot. Those who succumb to bloodlust devolve into mindless creatures that prey on the remaining survivors. The two sides of this society are trapped in an eternal game of cat-and-mouse in typical end-of-the-world fashion, that is, until your arrival. As the chosen one with a mysterious past, you hold the power to put an end to this chaos.

The tropes don’t end there. Characters favour cool, impractical clothing and hairstyles. The dialogue is laced with exposition, and the voice acting heavily exaggerated. It’s all a bit cringy, but also delightful. Rounding out the anime aesthetics is a robust character creation system, which allows you to customize every detail imaginable, from the colours of your clothes down to the alignment of accessories.

Combat is similar to other games of the genre. There’s a wide array of weapons, each with light and heavy attacks, and the main forms of defense come in the abilities to block, parry, and dodge roll. Even the checkpoint system is familiar, with progress saved by resting at specific nodes throughout levels. Where Code Vein differs, however, is with it’s Blood Code mechanic. By equipping various unlockable Blood Codes, you alter your character’s stats dramatically and gain access to new skills. Fighter focuses on strength and close range weapons, whereas Caster increases proficiency with guns and spells. This allows for a multitude of builds, all of which can be swapped between on-the-fly. Rather than being shoehorned into one class, I appreciated the option to experiment with new weapons and skills. The versatility of Blood Codes became more apparent as I played. Should you find that your two-handed axe swings too slowly for a boss, you don’t need to reset all your stats – you can immediately switch to another class there and then. 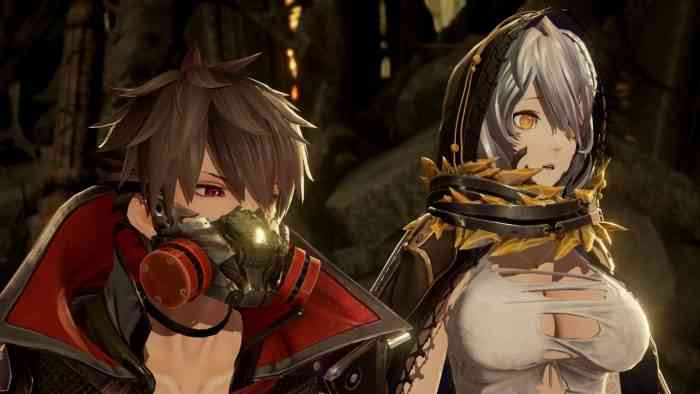 What’s most surprising is that Code Vein is not a solitary experience. An AI companion is always at your side. Their presence alone helps greatly by drawing attention from foes, but they can also revive you should you die, making combat missteps far less punishing. This does run the risk of making the experience as too easy, as I noticed my companion dishing out more damage than me at times. And if you require further assistance, you can summon other players into your world. Online play is completely co-operative, meaning you won’t have to worry about invaders.

Games of the Soulsborne genre are known for their brutal, borderline unwelcoming difficulty. With the addition of swappable classes and companions, Code Vein has the potential to appeal to players who have felt alienated by action RPGs released thus far, who long for something more accessible. As long as you can stomach the in-your-face anime influences, of course. Code Vein releases later this year.