Imagine suddenly losing your sense of sight. Pretty scary, right? Now imagine waking up trapped in an unfamiliar environment without your sense of sight, and your only chance of escape is to solve a series of puzzles set by your kidnapper. In Blind, you live through just that.

Developed by Tiny Bull Studios, Blind is a VR thriller about navigating the unseen, both literally and figuratively. You take the role Jean, a woman who finds herself with imprisoned in an empty mansion with no idea as to how or why she is there. Her first realization is that she is unable to see, and in the darkness, all she has to go by is her sense of hearing. By creating noises or tapping the floor with your cane, Jane can use echolocation to create a brief visual outline of the immediate area.

A Walk To Remember

For anyone who has played the 2017 survival horror, Perception, this concept is immediately familiar. Blind differs in that it focuses not on horror, but on its narrative. As you explore this mansion, characters from Jane’s life emerge as ghosts, revealing hints to her past and how she ended up here. The section I played has no jump scares or enemies to avoid. Instead, it revolves entirely around piecing together Jane’s relationship with her negligent father.

I was locked in a wing of the mansion that was an apparent recreation of the rooms Jane’s father frequented — his garage, library, and workshop. Through his rantings recorded on audio tapes, you gain a sense of who he was and what he meant to Jane. All the puzzles here were tied to objects that held importance to the both of them, and by solving them, Jane must confront her memories of her father. 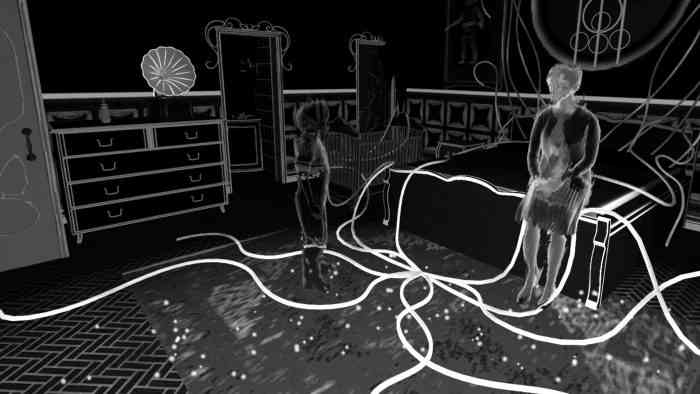 Puzzles are well hidden in the environment and Blind purposely gives you little direction in terms of finding them or solving them. However, puzzles often emanate sounds. One way to pinpoint them is by standing still and listening. Alternatively, if you stuck for too long, Jane may offer a helpful hint too. After finding the puzzle, you’ll have to comb through the surroundings for the key objects needed to solve them. This is especially challenging in VR as everything is interactive, from books to picture frames to perfume bottles. It’s a bit like playing through a real-life escape room. Puzzles themselves lean on the harder side of the spectrum, requiring logic and critical thinking. I toyed with the hands of a grandfather clock for ten minutes, hoping that simple trial-and-error could get me through — it did not. In the end, I had to stop and take a moment to fully assess the area, before finally locating the clue I missed.

Though Blind is not intent on scaring you, that’s not to say it isn’t scary. Stumbling through a vast deserted mansion accompanied only by the taps of your cane is certainly creepy enough. After a while, even the background noises start to feel startling, like the sounds of doors closing, thunder striking outside, or white noise on the radio. To make matters worse, a mysterious Warden occasionally addresses you through gramophones. He may or may not be your captor, and his motivation is unclear. All he seems to care about is that you solve his puzzles. If that doesn’t make the hairs on the back your neck stand up, I don’t know what would.

By infusing light horror elements with the traditions of narrative-driven adventures, Blind has crafted a unique identity for itself. The concept of a blind protagonist is not new, but in VR, it feels fresh and exciting again. Blind release on the Rift, Vive, Playstation VR, and OSVR later this year.

Maskmaker Review – A Convoluted and Beautiful Mess
Next Deathgarden is a Compelling Experience and Mechanically Shows Promise
Previous Shadow of the Tomb Raider Features a Wonderful Story, Fluid Combat and Brilliant Exploration