Legend of Zelda: Breath of the Wild ASTRO A10 Headset is Fantastic Bang for The Buck

Nintendo Switch audiophiles, consider yourself on notice! ASTRO Gaming is currently developing a version of their popular, entry-level gaming headset, the ASTRO A10, exclusively for the Nintendo Switch. For those unfamiliar, ASTRO Gaming has been developing headsets for consoles and PC for many years now, providing gamers quality audio products in a range of different price points. Recently, Nintendo reached out to Astro to develop a headset exclusively for the Nintendo Switch. I had a chance to try out this exclusive headset during my time at E3 2018 and I was very happy with the results.

What makes the new Legend of Zelda: Breath of the Wild branded ASTRO A10 so special? Well, there are a number of reasons. First, the headset is decorated with beautiful Legend of Zelda: Breath of the Wild glyphs to make it feel like it was pulled right from the game – assuming Link had a headset for his Sheikah Slate. Second, the partnership between ASTRO Gaming and Nintendo ensures the best possible quality. I had a chance to speak with one of the lead designers for these headsets and he told me how critical Nintendo has been during this partnership – all with the goal of creating the absolute best quality headset for Switch gamers. And finally, the ASTRO A10 comes with the special adapter needed to plug into your smartphone to enable online chat for games like Splatoon 2. While this might not be a requirement for all multiplayer games on the Switch (such as Fortnite), it will likely remain a requirement for Nintendo’s first party line up. 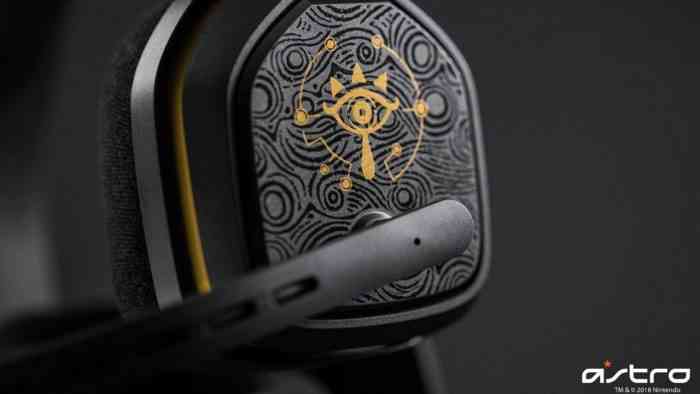 I had the chance to try out the actual Legend of Zelda: Breath of the Wild ASTRO A10 headset while playing Hyrule Warriors: Definitive Edition for Nintendo Switch and I was pleasantly surprised with the result. The headset feels great, the padded earcups were comfy and the band was easily adjustable to accommodate the size of my head. The audio was great; the bass really stood out to me and while the headset isn’t true 5.1 surround sound, the headset produced a simulated surround sound that still sounded great.

At this point, no release date or price point has been set, but they are targeting a launch of Fall 2018 with a likely price point of $60 USD. If you’re looking for the absolute best headset for your Nintendo Switch that includes chat capabilities, then you’ll want to hold off until the Legend of Zelda: Breath of the Wild ASTRO A10 launches later this year.