Transformers Trading Card Game Has Me Primed to Play More

How was this not a thing already?  I always assumed that at some point there had to have been a Transformers Trading Card Game and I simply missed it—it wouldn’t have been the first time that happened. So, I was a bit surprised so see that the Transformers TCG was brand new. With Hasbro graciously sending along the AUTOBOTS Starter Set and 2 Booster packs, I was primed to play, so let’s see what this is all about.

While Transformers are “more than meets the eye,” the TCG isn’t playing any tricks on your vision. The character cards are really big. These cards stand at roughly 3 ¼ inches wide by nearly 5 inches tall. That’s about 1.5 times larger in each direction than the battle cards and it certainly makes them stand out. There are four character cards in the AUTOBOTS starters set, along with forty regular sized battle cards, which is enough for two players to play the base game. There are also Booster Packs available containing one character card and seven battle cards.

All the cards sport some great artwork on them. If you are thinking about collecting them, the character cards have nice foil glimmer on the Bot Mode sides of the cards, but the size may make displaying and protecting them a little difficult. These giant cards are reasonably thick and should hold up well during play. That said, I did manage to somehow put some marks into one character after just one game even though I was being pretty careful, but that may have just been some random bad luck on my part. The battle cards on the other hand are thinner than your average playing card and if you were to hold one up to the light, the other side easily shows through. Bottom line, at the very least the battle cards will probably see some wear and tear on them fairly early on. The only question mark is how well they withstand being held in your greasy mitts. I only had them for about a weeks’ time at this point, but I haven’t noticed any signs of wear due to the natural oils on your hands.

So we’ve covered the cards, it’s time to get down to the game. Like Transformers themselves, the game is really two games in one. There is a basic game and an advanced game. The starter set is perfect for two players competing against one another with the basic rules. This involves each player selecting two characters and placing the forty battle cards in the middle as a communal pile to draw from. The goal being to knock out both your opponent’s Bots. The rules are simple enough to follow and the basic version is probably recommended for those on the low end of the recommended age scale (8+). Having two kids at that age range (seven and eight) I let them battle it out and they both were able to pick things up fairly easily. So that version of the game seems pretty good for either younger kids, or those just looking for a quicker game. 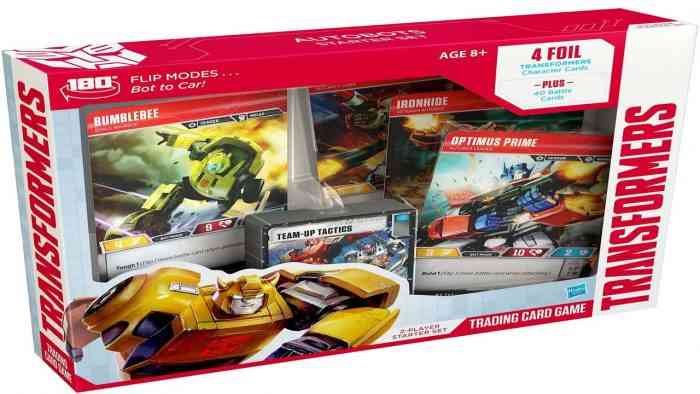 The advanced rules are a bit of a different story. The starter set does include a rules card with it, but it is only for the basic rules. If you want to play the advanced game you’ll need to check out the site here, which features videos on how to play both versions, along a link to a pdf with the official rules for both ways to play. While I understand the reasons why you’d make rules videos and have the advanced rules on the website, I would have appreciated a copy of those included in the box. Sometimes it’s just nice not to have to stick your face into a phone or computer screen for information. Regardless, the advanced rules are much more in depth as one may imagine. Unfortunately, it was going to be far more than the readily accessible pool of players here in the house could manage. To make matters worse, Halloween coincided with the local comic shops regular game night, wiping that out, so I didn’t get the opportunity to play the much deeper version of the game. But after brushing up on that set of rules I can see that it certainly would appeal to TCG veterans and fans of Transformers alike.

After spending the week getting to know Transformers TCG better, I feel like it has the potential to have some real staying power. The two variations on the way the game can be played certainly expands the amount of people that could potentially enjoy it. There also isn’t a massive amount of varying products from the get go, either. Right now the entirety of the line consists of forty different character cards and eighty-one battle cards. That’s not a bad thing, as it can give some breathing room for things to grow naturally. As far as early impressions go though, I like what I see so far.

Transformers: Battlegrounds Complete Edition Is Out On PC and Consoles