Everyone’s favorite 13-year-old explosives expert has returned to host another session of Bunkers and Badasses. Tiny Tina’s Wonderlands doubles down on the tabletop carnage by adding classic stat blocks, fully customizable characters, and playable classes. Each class fits nicely into long-standing tropes of your average dungeon delving party. One feature that makes Wonderlands so enticing to play for TTRPG fans is the opportunity to multiclass their character. This makes for some truly hilarious and overpowered combinations.

Upon reaching a certain point in the game, players unlock the option to pick a second class for their hero. This allows both classes’ passive abilities to trigger simultaneously. Players also get access to both Action Skills for each class. In addition, players can slot perks into both skill trees for incredible synergy builds that make them nearly unstoppable.

With tons of possible pairings at players’ fingertips, here are the top five best multiclass options being all-powerful in Tiny Tina’s Wonderlands.

This combination is immediately obvious once you see each class’s Action Skills. The FrostWilder is built for getting up close to the enemy and unleashing brutal Freezing powers. The Brr-zerker tree offers high survivability, quick healing, and bonus Frost damage. Skills like Blood Frenzy and Relentless Rage add healing and extend Save Your Soul. This keeps you both active on the field and constantly smashing heads. The Spore Warden, however, can summon three Frost Cyclones as well as reduce Action Skill cooldowns on kill. Combine this with the Mushroom Companion who can revive you, and the ability to regenerate ammo over time? Suddenly your character is a force to be reckoned with. 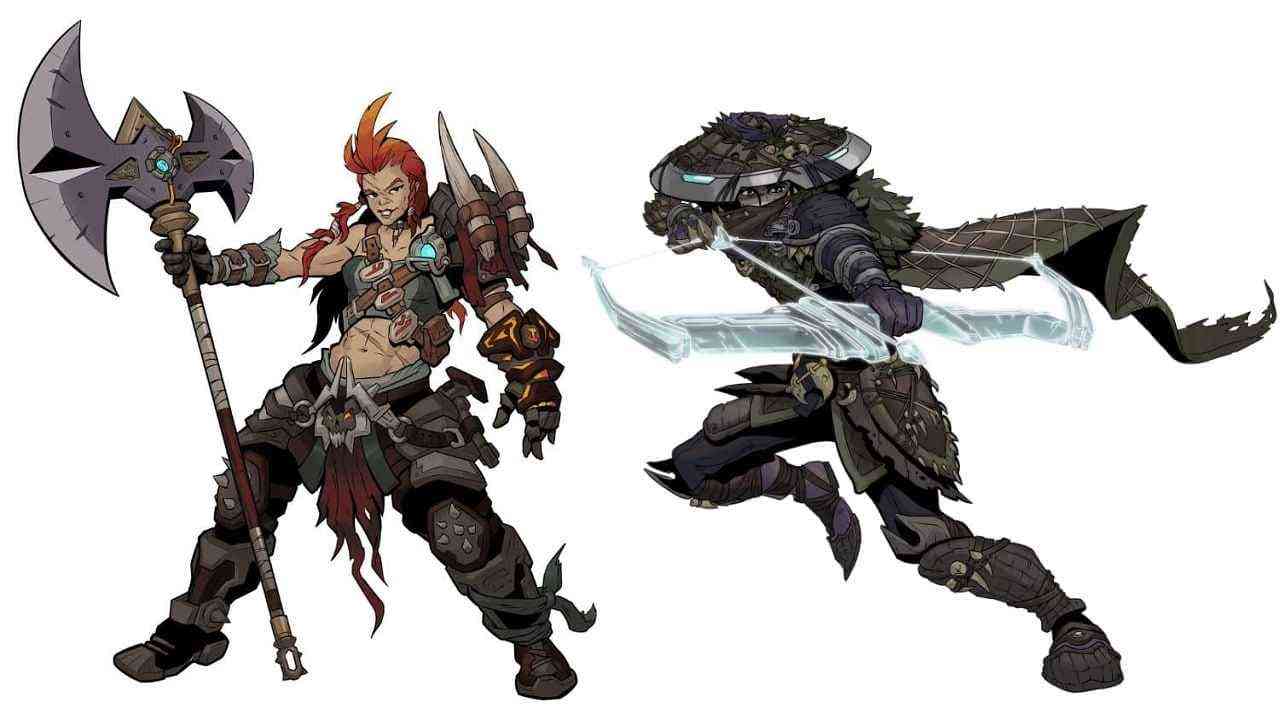 The FrostWilder class deals huge amounts of Frost damage. Pairing that with the Blizzard skill turns any battlefield into absolute carnage as they spread around the area. The more enemies defeated, the faster the Action Skill cooldown drops and it can be used again. With strong healing skills, extending Save Your Soul, and having a Companion who can revive you, this is a great multiclass for freezing the field and going on a rampage in Tiny Tina’s Wonderlands.

Speaking of pets, Tiny Tina’s Wonderlands’ Warlock and Ranger classes makes for a very potent Pet build. The Morticulturalist gains both the Demi-Lich and Mushroom Companions from each class. The Graveborn skill tree offers increased damage per Companion and extra Companion damage after a kill. They also have a Kill Skill to summon a Dark Hydra Companion. Having the Spore Warden’s Mushroom Companion means the Morticulturalist will gain boosted damage per Companion. They also have the ability to have at least two Companions at a time. This means one of them can revive the player while the other Companion deals damage. Maxing out the Graveborn’s skill tree also means that every time a spell is cast, every Kill Skill from both trees are activated, including summoning an additional Hydra Companion. The Spore Warden has skills to increase the health and damage of all Companions, giving the player a tiny army of powerful allies 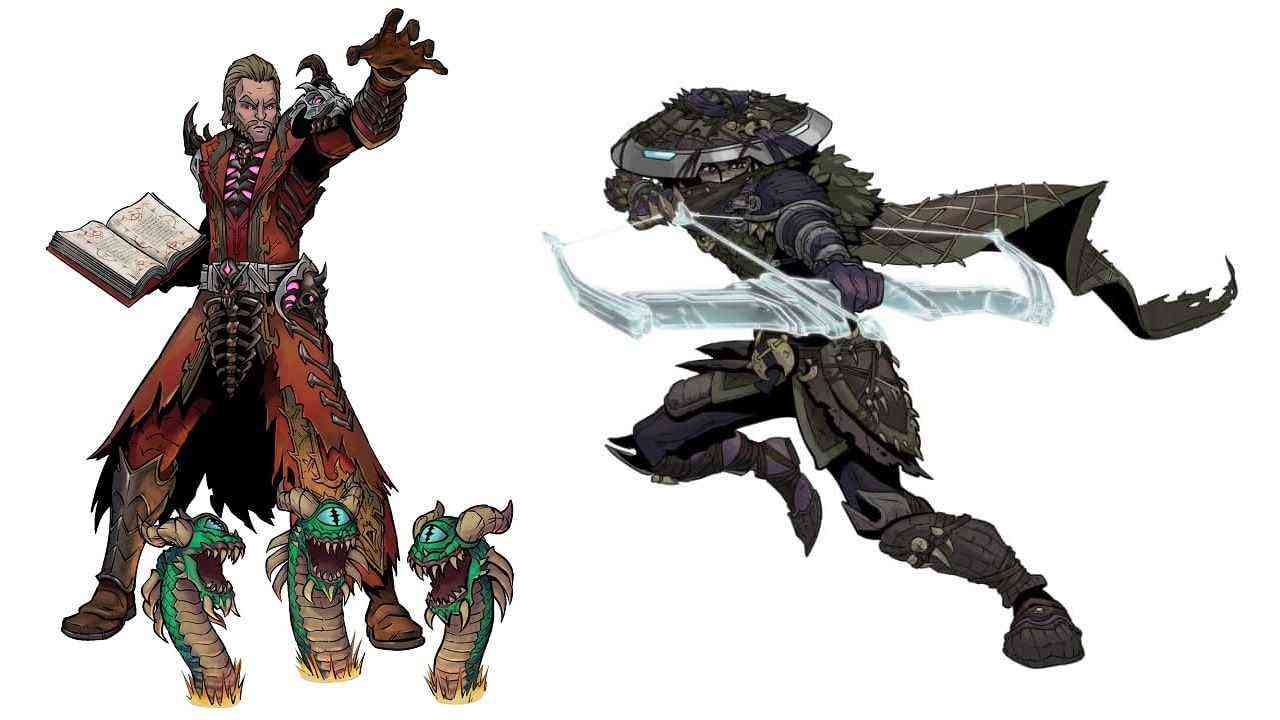 The Morticulturalist is great for playing an overlord of tiny creatures to do your bidding. They will attack enemies and even die for you, sacrificing themselves for the player to stay alive. It’s an incredible mid-range combination for slinging spells and sending minions to cause chaos on the battlefield.

Graveborn’s are impressive with their ability to regenerate health through Dark Magic and deal bonus damage with almost every kind of attack possible. Now add that to the power of the Spellshot for some truly lethal magic. Using a spell or reloading grants additional Spell Damage via a stack of Spellweaving. In Tiny Tina’s Wonderlands, Spellweaving can also increase the player’s rate of fire and Ward regeneration. Using the Spellshot’s Ambi-Hextrous ability, players can equip two different spells to rapid-fire back to back. In addition, the Graveborn’s Demi-Lich will cast Hellish Blast with each spell cast. Let’s not forget that a max-level Graveborn can activate all Kill Skills whenever a spell is cast. Prepare to watch that magic fly! 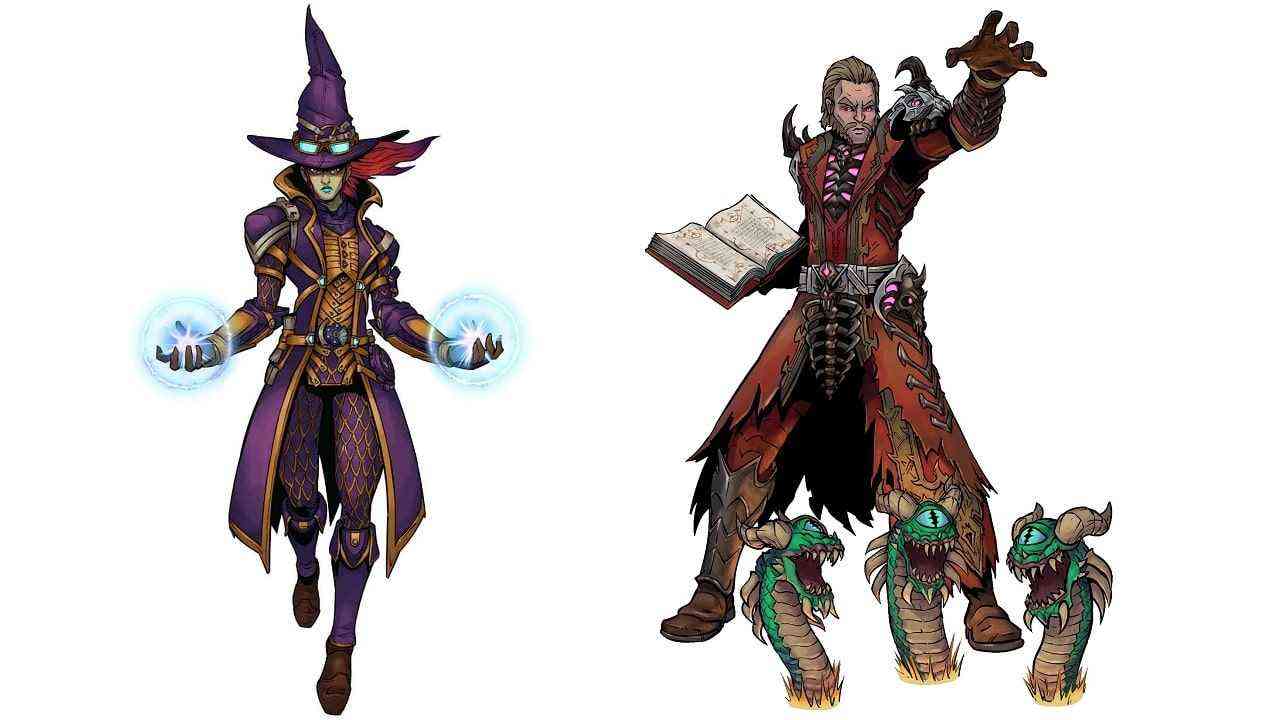 The Deadshot might be a squishier class to play, but at mid to long-range it is absolutely lethal. The class provides a constant bombardment of powers and enhancements, thanks to the Spellshot’s mix of weapon and magic buffs. It’s a phenomenal class for someone looking to light up the battlefield with all kinds of colorful and chaotic status effects and explosions.

Do you like seeing colorful numbers pop up on screen? The ClawStalker attacks with every kind of Status Effect imaginable. Potent Potions and Contagion from the Stabbomancer are the key features, increasing Status Effect and Duration. There’s also a chance to spread it to other enemies, or inflict an additional effect. Alchemical Agent will make Melee Critical Hits apply a random Status Effect as well, and the Stabbomancer is designed to hit Crits often. On the Clawbringer side, players can deal Fire and Lightning Damage with gun and melee hits respectively. Rebuke lets damage to allies be reflected back into Lightning Damage, and Blasthamut’s Favor is a Kill Skill that will generate a Fire or Lightning seeking orb which bounces to the nearest enemy. 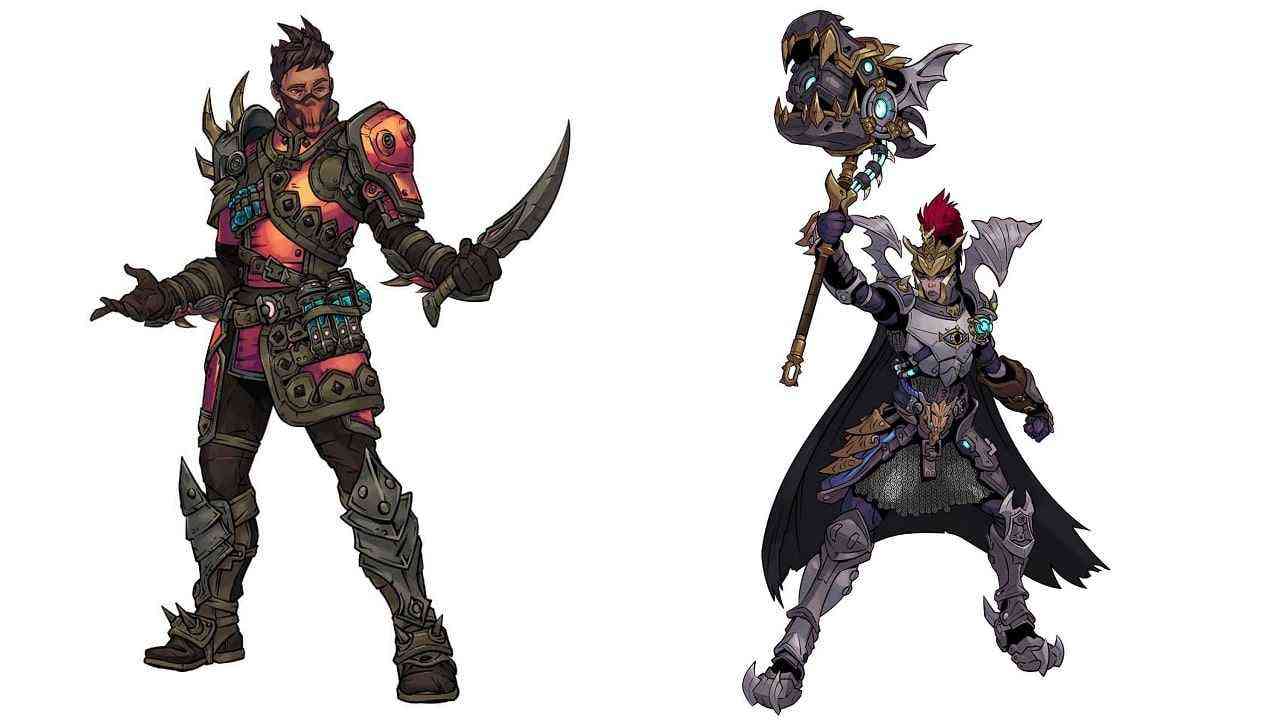 This combination means that no matter what your weapon type, you’ll be inflicting at least two Status Effects at once. Not to mention the Ghost Blade Action Skill will use the elemental ability of your equipped melee weapon. The ClawStalker is all about getting those Crits and inflicting a plague of DoT Status Effects to every enemy in the area. The elemental type of your guns quickly becomes irrelevant. Your natural skills will be constantly inflicting burn, freezing, poison, shock, and leech abilities just from engaging in normal combat.

Sometimes the best tactic is to carry the biggest hammer for all those nails. This is Tiny Tina’s Wonderlands’ best tank class combo. It combines the survivability of the Brr-Zerker with the incredible resilience and Ward enhancements of the Clawbringer. For defense, Dragon Aura increases all Elemental Resistances while Radiance improves a Ward’s power. For offense, Oath of Thunder deals Lightning Damage on melee hits. Unyielding also offers constant Health regeneration. The Old Ways increases Damage Dealt and Damage Reduction when in close range. Finally, Unarmored Defense takes a portion of the player’s Ward and converts it into Max HP. Both classes also have skills that activate when falling into Save Your Soul. Brr-zerker can extend the bar and Clawbringer will instantly refill their Ward and deal bonus Lightning Damage. 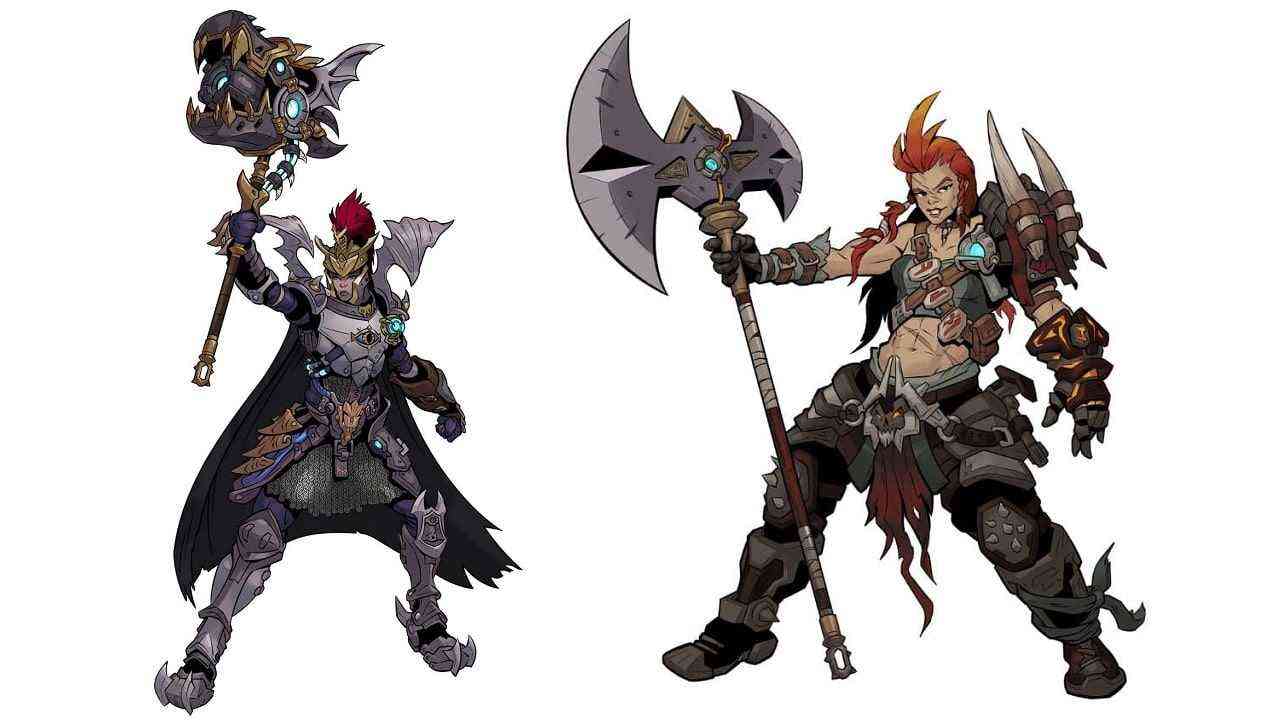 The HammerZerker is meant for ignoring guns altogether and running head-first into battle. Brr-zerker’s Blood of the Fallen skill lets players use any of the four devastating Action Skills at their disposal almost indefinitely as they cleave and smash their way through enemies.

Have you already jumped into the Wonderlands? Let us know your favorite multiclass on Facebook, Twitter, or the Comments section below. Tiny Tina’s Wonderlands is currently available on PC, PlayStation 4, PlayStation 5, Xbox One, and Xbox Series S|X