In the beginning there was Dungeons and Dragons. D&D led to, well, just about every tabletop and digital fantasy roleplaying game. Which led, in turn, to sci-fi and post-apocalyptic RPGs and on and on. Now we have Tiny Tina’s Wonderlands. It’s a novel-sized game inspired by the short-story-ish Borderlands 2 DLC, Tiny Tina’s Assault on Dragon Keep. This game within a game brings everything back full circle to the world of tabletop fantasy.

In Assault on Dragon Keep, the titular Tiny Tina — perfectly voiced by Ashly Burch — is a sassy tween demolition expert playing Dungeon…er, Bunker Master for a game of Bunkers and Badasses. The gang and premise return for Wonderlands. This time, though, it’s not just one chapter but a fully-fleshed out campaign. There’s nearly 30 hours of main quest and side content, plus an open-ended mode after you’ve finished the campaign.

Tiny Tina’s Assault on Dragon Keep was spinoff DLC for Borderlands 2. In that game, 13-year-old Tiny Tina DM’s a game of Bunkers and Badasses to kill time in the vault. It moved the visual aesthetic and first-person action of Borderlands into a more traditional high fantasy setting. Wonderlands does the same. This time, Tiny Tina has crafted a large and elaborate tabletop game world called Wonderlands. Wonderlands is under the shadow of the evil Dragon Lord, played by Will Arnett. When the Dragon Lord seemingly slays Queen Butt Stallion — a Rainbow-Brite-ish horse with two horns — you must go on a quest to avenge her death. 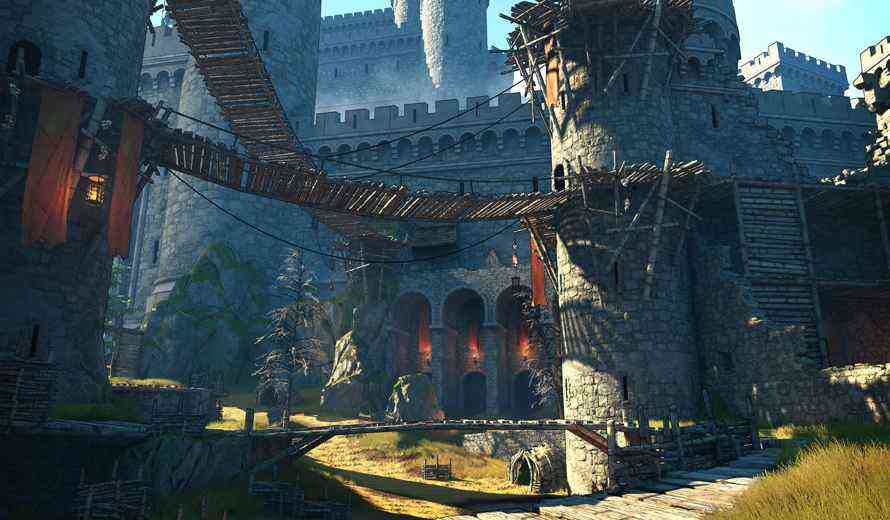 You play as a hero of legend, the Fatemaker. Around the game table are several recurring characters from Borderlands 2, including the pompous Valentine (voiced by Andy Samberg) and cynical bot, Frette (Wanda Sykes). Wonderlands includes a very thorough character creation tool. Most of the action is first person, though, so you don’t really see your character all that much, but you do hear them speak.

Tiny Tina’s Wonderlands shifts between first person action and third person exploration on the overworld map. The map is clever and filled with humorous, improvised touches like soda-can waterfalls and Cheetos blocking the path. Tina can also change the map in real time, adding dungeons or encounters on the fly, for example. Characters are represented by adorable, bobble-headed figures.

On a Quest for Fun

Like with any good RPG, the main quest takes the story from point A to point B, but a lot of the fun is in the game’s many side quests. While some of Wonderlands’ side missions are brief combat encounters that earn XP or loot, others are more elaborate, like the quest to help engineer a goblin worker insurrection. As you work your way through the campaign and around the overworld map, there are random encounters with quest-giving NPCs. Many of these are short and are actually completed in the overworld. Some of them involve going into dungeons to retrieve a key or item that unlocks more of the map or critical path. A few of the smaller dungeons feel a bit rote and repetitious, but usually they’re quick to clear and the combat is engaging enough to make them worthwhile. 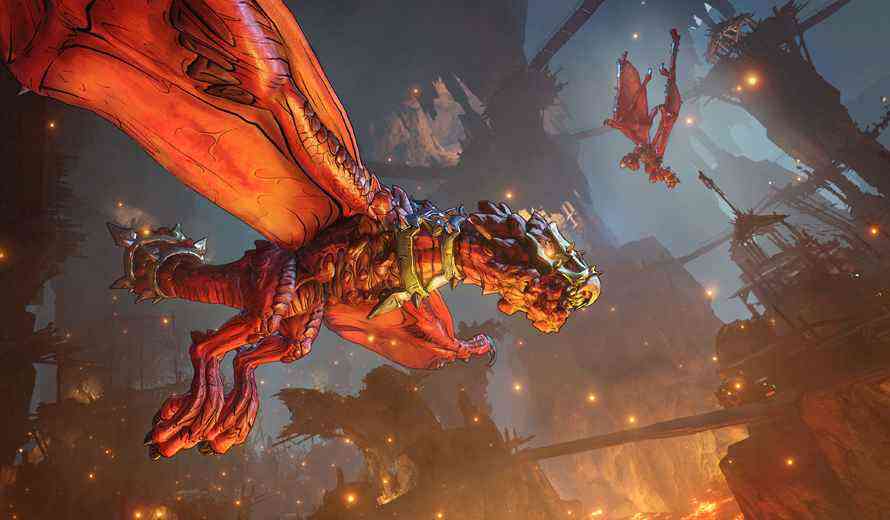 The map isn’t an immense open world but still quite extensive, and the main dozen or so big zones are varied and interesting to explore. Every area — whether the it’s Butt Stallion’s castle Sparklewhithers or the “gobtropolis” of Mount Craw — is full of style and humor.

In fact, humor is everywhere in Tiny Tina’s Wonderlands. It’s full of pop culture and game references, it’s often pretty low brow and juvenile but more frequently, pretty clever. A few of the more topical jokes land with a soft thud. . The game’s sense of humor is at its absolute best when it’s breaking the fourth wall or making fun of fantasy RPG tropes. Wonderlands is by no means the first game to do that, but thanks to the superlative cast of talented actors and sharp, witty writing, it’s one of the best. Tiny Tina’s Wonderlands once again proves the value of hiring real writers and experienced vocal talent.

Fans of Borderland’s combat will feel right at home with Tiny Tina’s Wonderlands, though the game makes some fundamental changes to classes and weapons. Still, moment to moment, the pace and flow feel familiar. One of the big differences is that every class is a magic user of one type or another. 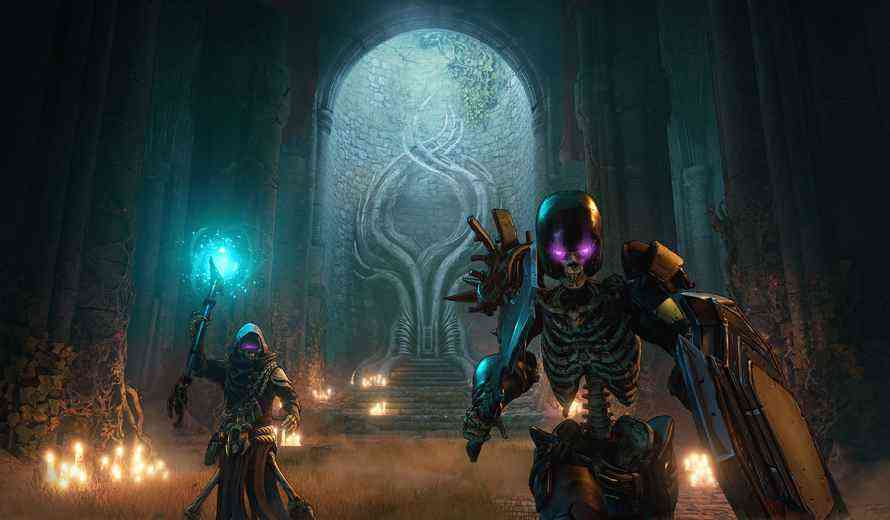 Because Wonderlands is a fantasy RPG, the six starting classes stick just a little closer to traditional tropes than Borderlands does. Classes include the ice-magic-using Brr-Zerker, the necromancer Graveborn, Spellshot, poison-spewing Spore Warden, and Stabbomancer. I played as a Clawbringer, specializing in thunder and fire spells, with a Wyvern companion. Later, characters can select a subclass as well, allowing for deep customization and a lot of flexibility. I tried all the classes, at least a little, and they’re all fun to play. Since you’re always dropping points into health, stamina, and the usual array of RPG stats, the starting classes are just that.

Wonderlands, like Borderlands, features an over-abundance of weapons, consumables, ammo and armor scattered around the environment and in vending machines. Just like Borderlands everything is color coded by rarity.  The stat-obsessed will probably spend a lot of time comparing minute difference between gear. New to Wonderlands are Wards, which are magic-powered shields that come in three varieties, each with varying strengths and weaknesses. Rings and amulets add buffs and special effects. Finally, every character carries some sort of melee weapon like hammers and axes.

In the heat of combat, switching between all the weapons, spells and abilities is an entertaining and satisfying ballet of constant movement and action. Add to that the verticality of the environments and the variety of enemies in almost every encounter and the sum total can be addictive and often thrilling.

The Wonderful World of the Wonderlands

I’m a big fan of Borderlands’ style cel-shaded art. It’s an absolutely perfect match for the high-fantasy tone of Wonderlands. While some of the dungeons and caves are appropriately dark and drab, they’re offset by the colorful, storybook look of areas like the home base town of Brighthoof. Likewise, the various monsters, animals and human characters look great. Each major area of the game has its own roster of enemies. These include goblins, trolls, skeletons and human pirates, plus a whole bunch of weird creatures.

Wonderlands has a pretty broad range of options when it comes to PC graphics, audio and accessibility settings. That’s the good news. The bad news is that the pre-final release code was not without issues. These included some visual anomalies, frame rate hiccups, freezes and controller problems, though the latter may rest with the Epic host and not the game itself.

In addition to the single player campaign, Tiny Tina’s Wonderlands is playable co-op with up to four players, cross platform. There’s also substantial, open-ended post or endgame content called the Chaos Chamber. It consist of a series of three randomized dungeon rooms, each with a mini-boss and ending with a final challenge. Finally, the game’s season pass includes four upcoming DLCs. It’s clear that Gearbox sees real potential in Wonderlands as a pretty open-ended platform. For good reason. 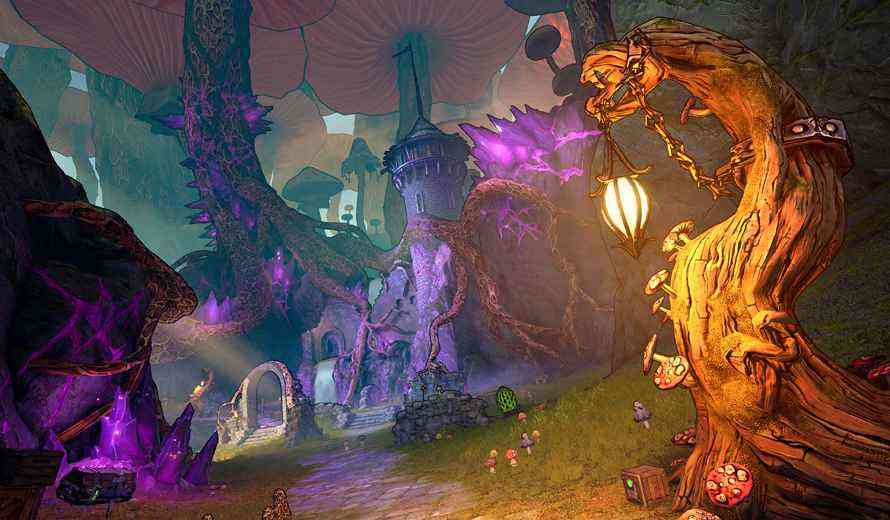 Although it uses the Borderlands 3 engine and reprises several characters from earlier games in the franchise, Tiny Tina’s Wonderlands does a great job of separating itself from its brethren. With a focus on high fantasy and cheeky humor that constantly pokes fun at RPG traditions, Tiny Tina’s Wonderlands also doesn’t stray far from them, at least mechanically. Great writing, pitch perfect acting and frenetic action dominate the game, but exploring the nooks and crannies of the colorful overworld and detailed dungeons is equally satisfying. I had a blast in the Wonderlands and can’t wait to see what else the irrepressible Tiny Tina has in store for us. 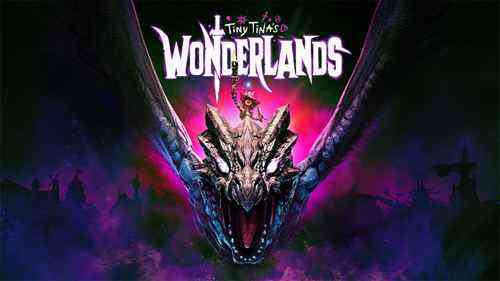