The Outer Worlds: 6 New Features We Didn’t Know About and Love

Obsidian has been very careful in what they have shown the world in their trailers, but what we have seen has been nothing if not mind blowing, over the top action. We had an opportunity to go even further at E3 2019 with a special screening of never before seen gameplay footage. We definitely know the kind of humor we can expect, and given that the team at Obsidian worked on the early Fallout series we loosely know the kind of gameplay we are in for, but what about are they bringing to the table to make it stand out from its predecessors? What makes The Outer Worlds this fascinating draw for gamers in the hopes for the next wild and fun first-person shooter? Well, here are six new features we didn’t know before about The Outer Worlds.

6. The Backstory of Monarch

We knew since the first trailer that The Outer Worlds would feature at least a few planets which were settled and owned by major corporations, often leaving the settlers to fend for themselves like the Old West. We now know that one of the planets, Monarch, was the first of the worlds in that system to be colonized and terraformed. Their plan was to terraform the atmosphere and let the process wipe out all life on the planet, nice and simple… although things didn’t go as planned. Life, as they say (uh) finds a way and not only survives but grows bigger, meaner, and has a fairly large hatred for humanity. With most of the corporations feeling the planet was now worthless, they abandoned it all save for one – the Monarch Corporation – who bought the planet and renamed it after themselves! 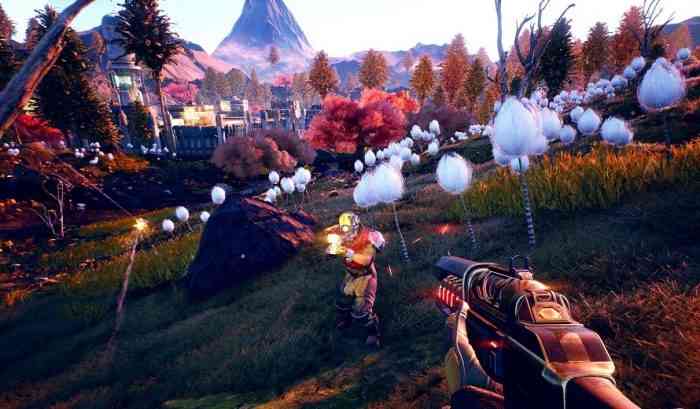 5. Have a Meaningful Conversation

The classic conversation tree returns from the Fallout series with a wide variety of dialogue options that feel very unique and generally fit into the paths of hero, villain, or psychopath. NPCs will react appropriately to your responses in a believable manner and it feels much less like a generic, nameless hero as these options let you spice up your character in new and different ways than we were able to before.

4. Return of the “Dumb” Options (and Others)

For those of you old enough to remember the original Fallout games, it was possible to have an intelligence rating so absolutely terrible that you could respond in conversation with the “Dumb” options in which you spoke slowly, with little eloquence, and often said something so stupid or unrelated that other characters often took pity on you for your diminished capacity for communication. It was something funny to see in a game about the apocalypse and Obsidian could not pass up the opportunity to do it again. That’s not all, of course, as stat-based conversation options will also arise such as intimidation or charm but these are reflected in their own individual stats as you build your character. You might have a smooth talker who simply can’t seem mean or a bruiser that wants to smash everyone he meets, the options abound!

Avowed Is ‘Deep Into Pre-Production’; Could Be Revealed at E3 2022
Next Who Won E3 2019? EA Was Boring, While Nintendo and Microsoft Shine
Previous 3 Best and 3 Worst Trailers From E3 2019