Quite The Opposite, In Fact

Switch controllers are great, but what if they were way smaller? Like, half the size. This might seem like a terrible idea at first, but hear me out! PowerA sent me a Nano Enhanced wireless controller for the Switch. Having done no prior research, I was shocked to discover it’s just an itty bitty thing. A wisp of a controller, apt to blow away with a powerful breeze. There are some upsides to a smaller build, however.

For example, if you grew up playing portable games, all these size concerns are irrelevant to you. My clumsy, adult hands had no problem adjusting to this bite sized new reality. Yes, my previous experiences prepared me for this challenge. But even without this helpful personal background, the Nano is an easy fit for most players. While the actual controller is way smaller, the button layout is more or less identical to its full-sized counterpart. In fact, the only significant difference is that the Start and Select buttons are farther apart on the Nano. Beyond that, the whole thing feels immediately familiar once you get it in your hands. 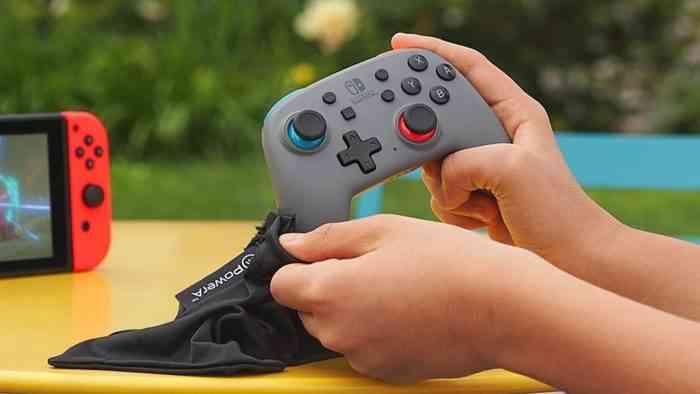 Unless you’re a big D-pad user, in which case some problems may arise. The pad works, don’t worry! You just have to really mean it when you press a given direction down. No flighty half-measures or casual inputs here. Aside from that it feels the same? Your button inputs are all reliable, plus the unit itself is nice and weighty. The analog sticks feel rock solid as well, which never hurts. It’s honestly remarkable how fast you forget you’re rocking a pint-sized Switch controller. That said, there a couple of other things you have to keep in mind.

A Properly Portable Size, No Less

Since this is a third-party rig, the Nano doesn’t cost nearly as much as a regular Pro controller. Part of those savings come from missing features. There’s no amiibo functionality, and no rumble. But, you’ve got motion controls and extra programmable buttons, which is nothing to sneeze at. Also, this is a wireless gamepad, which is not the case for every third-party device. Sometimes a lower price point comes with a hefty convenience cost, but not this time!

If you’re shopping for someone other than yourself (for some holiday-related reason), the Nano could make an excellent gift. It’s small enough to fit in a stocking, for one thing. Plus, if you or a loved one is obsessed with fighting games, those extra inputs would be awesome! I assume. Maybe you need a convenient spot to stick the grab mechanic, or even a set of triggers for shooters or FPS games. Or maybe you just need a couple more buttons to accidentally hit, ruining a difficult run. The possibilities are endless!

So there you have it. Rather than a lesser version, the Nano is a compact alternative to your usual controller needs. Be it holiday shopping or essential retail therapy, it might be a good idea to keep PowerA’s tiniest Switch controller on your shopping lists. If you want more breakdowns of PowerA gear, I’ve written a piece or two. Perhaps bigger isn’t always better, after all.