It has been 37 years since the original Microsoft Flight Simulator first allowed gamers to take flight in a fun, simulated environment. One of the key drivers for the Microsoft Flight Simulator experience has been authenticity and it truly has only been limited by technology with each incarnation expanding on the last in a variety of ways. Fast forward to today, and we are now gaming on devices with the ability to display near-photorealistic imagery, giving games a more life-like quality then they’ve ever had before. For Microsoft, this was the ideal time to introduce Microsoft Flight Simulator 2020. For this version, they utilized the very capable team at Asobo Studios, developers of beloved games such as A Plague Tale: Innocence, Monopoly Plus, and Fuel. While we’ve only had a chance to play the Alpha version, it’s safe to say that Asobo Studios has definitely stepped up to the plate to deliver a spectacular flight sim experience.

Microsoft Flight Simulator 2020, like it’s many predecessors, is all about the authentic look and feel of flying a plane. If you’ve ever taken a gander at the cockpit of a real plane, you’ll notice a boatload (planeload?) of various buttons and displays. These controls aren’t there just for show, and in Microsoft Flight Simulator 2020, you’ll be utilizing many of those controls to fly a vast selection of planes. You’ll need to master the take-off, the ascent, maintaining altitude, the approach, and the landing if you want to successfully pilot a plane. Fortunately, the game features a fairly robust selection of tutorials and a decent amount of settings to tweak the piloting difficulty. The tutorials are a must for any aspiring pilot, and you’ll likely spend an hour or two just completing them. Unfortunately, if you do happen to crash during a tutorial, you’ll need to start the entire tutorial over again. That’s not to say the tutorials are overly challenging, but they’re no walk in the park either. Tweaking the various difficulty and assist settings can turn the simulator into a less daunting, yet still challenging experience. While I attempted to handle most of my flying with an Xbox 360 controller, I needed both my mouse and keyboard within arm’s reach to tackle some of the more obscure commands. 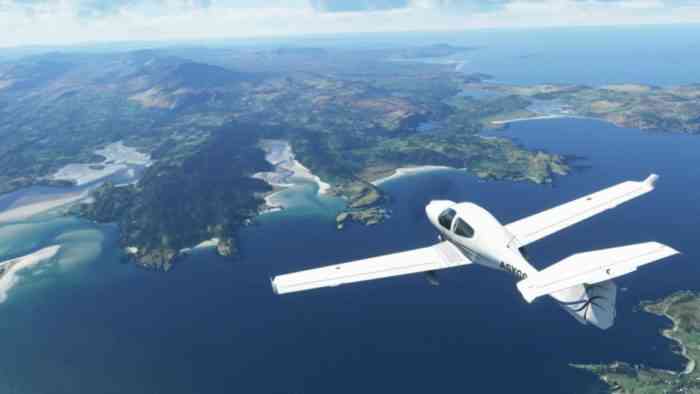 Once you’ve gotten a knack for the game’s controls and can handle situations like landing, you’ll be ready to dive into the rest of what Microsoft Flight Simulator 2020 has to offer. For a more structured approach, you can try your hand at Activities which includes Landing Challenges and Bush Trips. Landing Challenges will put you in a number of different scenarios where you are on approach and must land the plane. The scenarios range from iconic locations to challenging weather conditions, such as high winds. Bush Trips are pre-planned routes that act as a sort of scenic tour. If you want a less structured approach, you can pick the expansive World Map option. From here, you’ll be able to pick your aircraft, your departure and arrival airports, and your weather conditions. This is where you’ll go when you want to take a scenic trip around your hometown or if you want to take yourself on a virtual vacation. The sheer number of airports included is incredible – you truly can travel anywhere you want in this game.

Flight Simulator is an absolutely gorgeous game. Or at least, I’m lead to believe it is based on the extensive footage I’ve watched. The reality is that my PC, despite being capable of handling a game like Grand Theft Auto V with all visual settings set to their maximum levels, was only able to enjoy Microsoft Flight Simulator 2020 on “medium” settings. And even then, there were times when the game just barely chugged along. The game is incredibly taxing on a PC, and only those with the latest and greatest hardware will be able to truly enjoy what Microsoft Flight Simulator 2020 has to offer. For me, I was still able to see an impressive landscape of tall, tree-covered mountains, fluffy white clouds, and beautiful waterways. Cities still had roads with occasional vehicles driving around, and there were structures where buildings should be. When I flew around some cities that I’m very familiar with, I was able to recognize many of the locations, much like you would if you were using Google Maps. One thing that disappointed me was in the event of a crash, the screen simply fades to black and indicates failure. Sure, crashing is something we want to avoid, but if we’re going to crash, we may as well do it in style, complete with explosions and destroyed terrain.

As amazing as Microsoft Flight Simulator is shaping up to be, there are a few things that I hope we’ll see pop up in the future. First, it would be neat if officially licensed businesses could advertise in game, by having their ads and buildings located in actual real-world locations. Imagine flying around at night and seeing McDonald’s iconic golden arches lit up in their actual real-world locations. This would generate some ad-revenue for the game, while also increasing the game’s overall realism. Second, many communities around the world have iconic monuments within their city limits. Sure, the Eiffel Tower is in the game, but what about the giant beaver from the community of Beaverlodge, Alberta? And finally, I’d love to see some fun and wacky Easter eggs throw in for good measure. During our conference with the developers, we learned that certain locations that are considered “classified”, like Area 51, just appear as an open area with no actual buildings. So, why not have some fun and build a faux military structure there with UFOs hovering around? Or maybe, under the right conditions, if you fly over Okanagan Lake, you could see the mythical Ogopogo pop his head out of the water. I understand that realism is key here, but having a little fun along the way could give gamers a reason to travel to locations they might not normally travel to.

Microsoft Flight Simulator 2020 is an incredible feat of a game. If you have the hardware, the game will look absolutely gorgeous on your PC – but the requirements are steep. The sheer magnitude of Flight Sim 2020 can not be denied. You can quite literally fly anywhere on the planet in a vast selection of planes. When the game officially launches, a marketplace will allow avid pilots to purchase additional planes – I’m hoping we’ll see some military planes included in the mix. One thing I haven’t yet mentioned is the impressive weather conditions built into this game – this is something we’ll be diving deeper in a future article, so stay tuned for that. Microsoft Flight Simulator 2020 is gearing up to be an impressive Windows 10 and Xbox Series X game. We can’t wait to take flight when the full version is released later this year.