The Legend of Zelda: Symphony Of The Goddesses – Absolutely Magical Live Show

Symphony of the Goddesses is a feast for the senses…

As a lifelong Zelda fanatic, I knew going into this show, The Legend of Zelda: Symphony of the Goddesses, that I was going to love it. I knew the show was going to feature a sizable choir and a whole bunch of instruments. I was pretty certain that there would be music from Breath of the Wild, since it’s the newest game in the series. I was also pretty sure I was going to tear up, though I somewhat underestimated how much this show would move me. Long story short, I was blown away by what I witnessed at Vancouver’s Queen Elizabeth Theatre last week.

My friend and I arrived at the Queen Elizabeth Theatre in time to witness thousands of Zelda fans streaming through the doors. There were a few cosplayers wandering about, but my less-than-stellar social skills kept me from getting any photos. Asking strangers to pose for you is still weird, never mind what’s on my business cards. Even in the short minutes of quiet before the show began, I was mostly numb to the impending tidal waves of raw feeling. It was just a concert, after all.

The first arrangement was nothing more than a preview, short thirty-second bursts of every arrangement to come. It was an excellent assault of anticipation and confusion. This first track also immediately got me glassy-eyed. Apparently, ten seconds of music from Breath of the Wild is all it takes to crumple my defenses. Thankfully the first full arrangement, Wind Waker’s Dragon Roost Island, was a bouncy, light-hearted reprieve. Even Majora’s Mask, which made me feel a little insane, still left me pretty clear-eyed. 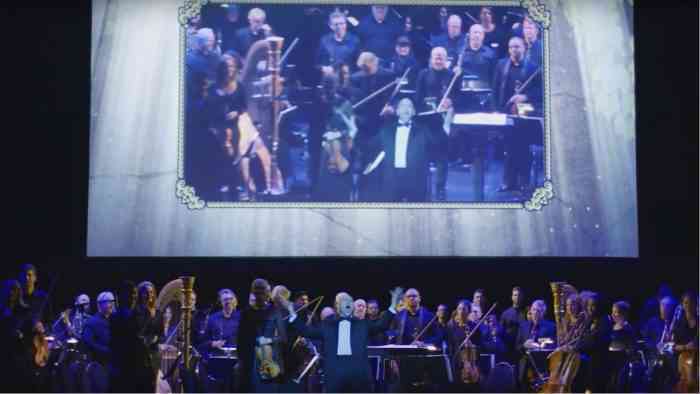 Of course, a full Breath of the Wild arrangement came next. I was enraptured, my heart full to bursting. All of it was too beautiful to absorb. The B-roll footage lifted from the trailer took on new life. Even now the frantic swell of it puts a hitch in my chest. You might assume that the music of your childhood favorite would be the most powerful, but apparently, these soundtracks only got better every time. I wanted to live in that moment for the rest of the night but alas, the show continued apace.

Something I had forgotten about until that night was just how good the music is for Skyward Sword. Every theme in that game is custom built for an orchestral upgrade. I was sucked right in, a needle of nostalgia to the veins. This show was downright dangerous. Here I was, pining for (and looking to replay) a game I found utterly frustrating from start to finish. If you’ve never played Skyward Sword, it’s a beautiful hodge-podge of backtracking and motion controls wrapped in an incredible setting and a heart-breaking musical score. Every boss fight had me rocking back and forth like a mental patient, yet somehow this concert made me want to go back and do it all again.

“There’s just something magical about seeing so many fans gathered together to celebrate the series.”

There were a couple of songs that failed to move me, but for the most part, every piece was a knockout. If you’ve got a history with Zelda games, this concert will lift you out of your chair and blow you off your feet. Even if you’ve only started your journey through this series of games, these arrangements tell a compelling story covering the high points of the entire franchise. Plus, there’s just something magical about seeing so many fans gathered together to celebrate the series. There’s still a bunch of dates happening across North America for the rest of December. If you can make it, I promise The Legend of Zelda: Symphony of the Goddesses will be worth your time and money.