Lavapotion’s Niklas Borglund Explains the Essence of Songs of Conquest

COG: It was mentioned that the game will feature four factions to play as, can you give us an idea of the themes behind these factions? The HoMM series has always broken down into groups such as the humans, the undead, the barbarians, etc, will that also be the case with Songs of Conquest?

Lavapotion: Yes, we will have four different factions for release. The gameplay of the four will be quite different in terms of play style.

Arleon: A faction of gallant knights, stout squires and formidable archers united with the magical Faey of the forest.
Rana: The oppressed swamp frog people, rising up to reclaim their mighty heritage.
Doneria: A gold loving merchant nation armed with gunpowder, machines and mercenaries.
Barony of Loth: An unholy coalition between the dead and the living.

COG: Will each faction have its own campaign story?

Lavapotion: Yes, we are planning to develop a campaign for each of the four factions.

COG: We saw only a brief glimpse of what Wielders might be able to do in the trailer. What can you tell us about this new mechanic and how they compare to simply having a “hero” character who can cast spells?

Lavapotion: The main difference is that the Wielders will draw something we call “The Essence” from their troops. Depending on the troops you bring to battle, you will get different spells of different power. For example, if you need spells regarding movement speed – you have to bring “fast” troops. 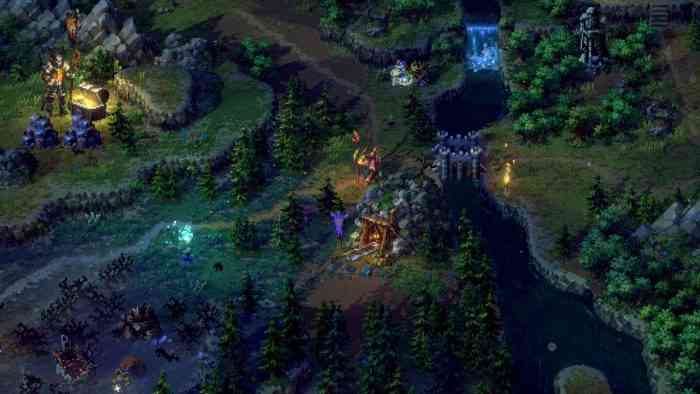 COG: Will Wielders be augmented or upgraded through the use of artifacts or leveling? Does each faction have a unique tactic?

Lavapotion: Yes, Wielder leveling will be very important to the gameplay. We want our players to have many different options on how to plan their strategies.
And definitely, we want the play style of each faction to be different from each other.

COG: Will units be upgradeable? How many units will each faction have?

Lavapotion: Right now, it looks like each faction will have around 9 units. Some troops will be upgradeable, others not. It depends on the faction.

COG: Local multiplayer was mentioned as an option at launch. How many players will be able to compete in a map together?

Lavapotion: At the moment, the cap is set to 8. However, that might change in the future.

Dead Cells’ Enter The Panchaku Update Has Officially Released
Next The 10 Best PSVR Games of 2019 So Far…
Previous 3 Up, 3 Down: The Best (and Worst) Games from June 2019