Get Ready for a Whole New Brawl

Brawlout is coming to Nintendo Switch right before the holidays kick off, giving fighting game fans a new opportunity to punch some faces in a Smash Bros-esque format. In preparation for the game’s upcoming release, I had a chance to speak with Bodgan Iliesiu, CEO of Brawlout dev Angry Mob Games, about the upcoming slugfest. Guest characters, gameplay decisions, the inevitable Smash Bros comparisons like the one I’ve already made, we touch on all of that and more. Enjoy!

COGConnected: What features set you apart in the inevitable comparisons to Smash Bros and Brawlhalla that are bound to surface?

Bodgan Iliesiu: While Brawlout is based on the Platform Fighter genre which was established by the Super Smash Bros series, the fighting game mechanics are inspired from more traditional fighters, like Street Fighter, Tekken or Mortal Kombat. The movement and win rules are really where any similarity lines can be drawn to Super Smash Bros.

We’ve focused on more fast-paced battles, faster movement and a lot more aggressive combat style for all characters. Brawlout is combo oriented, with block and grab buttons totally removed, and this takes away the defensive playstyles found in Smash. Instead of having to read the opponent’s moves, and reacting to them (in the rock-paper-scissor / attack-block-grab style), all you need to focus on is your movement flow and anticipating your opponent’s trajectory around the stage.

We also introduced the Rage Meter. It’s charged by dealing damage or even faster by taking damage. When half filled, it gives you the option to do a Rage Burst, which acts more like a Combo Breaker in Mortal Kombat (you can interrupt your hitstun, or even use it to do several air moves such as 2 recoveries, when activated in air). When the Rage Meter is full, you can go into Rage Mode. This lets you deal more knockback while lessening your own when hit.

The main difference is the character play styles. They are not duplicates of Smash movesets, but instead, all designed around established fighting games archetypes or fun action games mechanics. For example, King Apu wields a long chain, similar to the main protagonist in Castlevania, while Olaf Tyson combines close range boxing moves with long-range freezing attacks (a-la Sub Zero). Whether you’re a die-hard grappler or a rushdown fiend, there is a fighter for you in Brawlout.

The metagame outside the main play modes are a totally unique fighting-platformer experience, likened to modern online games, similar to Overwatch or Injustice 2 (or even Brawlhalla), with progression mechanics and robust online tools, like:
• 1v1 Casual matches for low-stress competition
• 1v1 Ranked matches
• 2-4 player private lobbies where players can practice or mess about to their heart’s content
• The Brawlout Network where players can check their fight stats, match history and replays
• Brawlout TV which allows for live spectating and watching of specific player replays
• Weekly competitive tournaments for those looking to prove their Brawlout skills 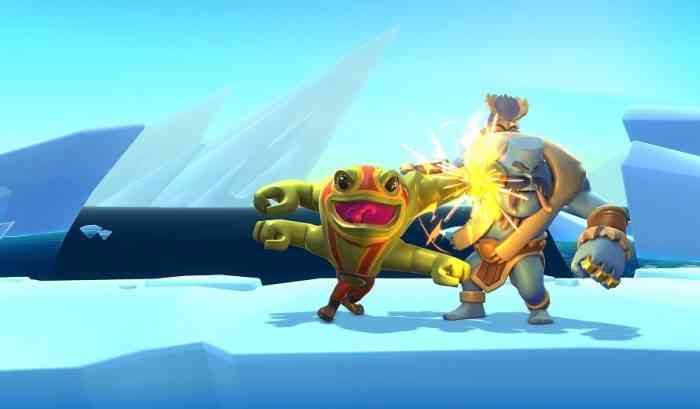 COG: How early in development did you decide to eliminate blocking? Was there ever a blocking mechanic?

BI: We started with the absolute basics, and then tried to see how we could get to the same fast-paced battles, with as few button inputs as possible.
Initially, you were able to just have directions, the attack, and the special button. There wasn’t even a dash/rage ability. But those extra movement mechanics proved super helpful, so we added them. Other advanced mechanics, that don’t depend on extra buttons, are all there, like wavedashing, ledge grabs, teching, rage bursts etc.

COG: What’s the story behind Brawlout? Why are these animals fighting? What happened here?

BI: We do have a story that we’re developing for after launch with a possible story-mode, but we’re keeping it close to the chest until later, when we have the time to really polish up the story campaign.

The Bottomless Brawl has been destroying the Earth for hundreds of years. Now, each civilization has selected its finest warrior – an Exemplar who represents the nation in controlled fights. The violence has been contained, but the war shows no signs of ending.

Approached by a mysterious figure known only as The Hood, you learn of an ancient power that could finally bring about peace. But as you fight to take that power from your rivals, you’ll uncover secrets that stretch back to the day of creation – and could end this world once and for all.

COG: What were some of the inspirations around the original characters in the game? Paco the luchador frog is particularly interesting, what’s his story?

BI: All characters are designed around their movesets. Which in turn is based on well known fighting game archetypes, like grapplers (Paco), rushdown (Sephi’ra), fighting styles (Olaf Tyson who is a boxer, with freeze abilities) or other really fun action game mechanics (King Apu wields a long chain, similar to what you see in the Castlevania games, or God of War). All our original characters (not the guest characters) are based on different world cultures and civilizations, so that also helps to give them a common theme and strong personalities.

For example, from a young age Paco had admired the strong wrestlers on TV with their colorful masks and larger-than-life personalities. When hearing of the Brawlout stage attended by the strongest fighters in the world, he gathered his courage and set out on a journey to finally fulfill his dream. On the road, he encountered a mysterious peddler selling odds-and-ends, when a piece of shiny red material caught his eye. Picking up the fabric, Paco discovered a mask that seemingly tailored to him. He pulled it on and felt a sharp tingling at his sides, only to find that he had sprouted two extra arms from his mid-section. While most others would be horrified by the appearance of new limbs, Paco was delighted at the advantage they would give him in the ring. When he looked up to thank the peddler, he stood in the road, alone, the mysterious man had vanished into thin air. Paco found his extra extremities to be a blessing in the ring, and while having no formal training, he found victory one after another with the help of his second set of arms. Windmilling his four arms and shouting the names of his signature moves aloud, he battered his way through all of the competition. 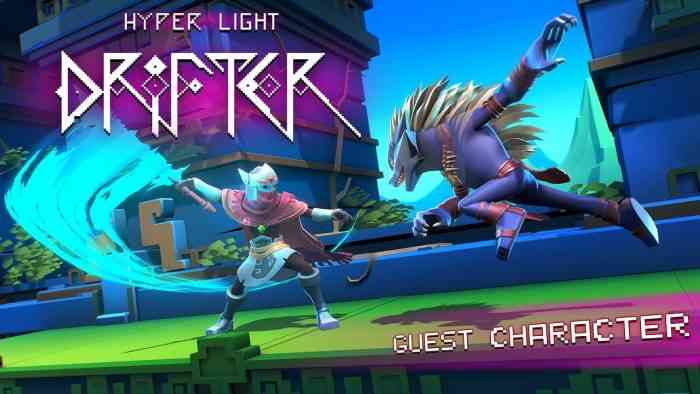 COG: Moving on to your guest characters, what were the challenges inherent in converting a 2D character into the 3D space? Were you given design liberties, or was the original creator involved in the entire process?

BI: Ever since we settled on the various play styles we wanted to include in Brawlout, we knew we needed an amazing sword fighter. The Drifter from the popular indie title ‘Hyper Light Drifter’ had such an amazing kit; it was one of the dream characters we all loved and thought would be perfect to move to our game. We were lucky that Alex from Heart Machine (the developers of Hyper Light Drifter) is a hardcore fighting game fan and really loved Brawlout when he tried it out.

Working on integrating Hyper Light Drifter was a long process, even if we had clear design ideas for most of his move-set. In all, it took us over 8 months to finish him from conception and modeling, to animations, and all the way to final balancing.

COG: Why choose Hyper Light Drifter and Juan over other prevalent indie characters? What about those characters drew them to you?

BI: There are so many amazing indie characters, it’s nearly impossible to create a definitive list of ideal candidates. In fact, we’d love to include some more in future game updates. We started with Hyper Light Drifter and Juan because they have great fighting game-esque moves already built in. It would be much harder to add a character that was less combat oriented, or one that only shoots bullets (ie. Cuphead, which we heard from a number of fans would be cool to see). It would still be lots of fun, but they wouldn’t be so great for competitive play. 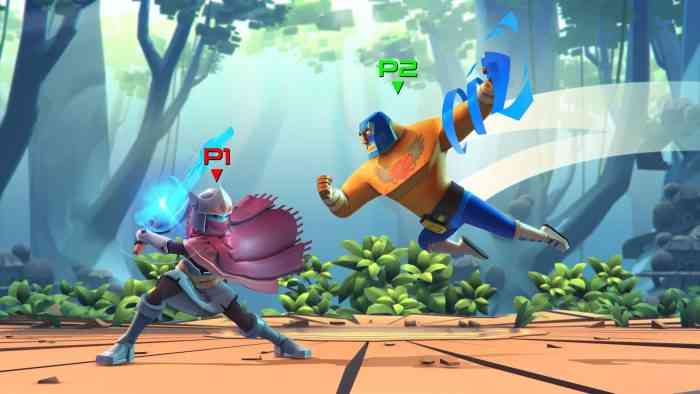 COG: How much of their respective games have your incorporated into their movesets? Which of the two was easier to draw up a movelist for?

BI: They both had tons of options to choose from. Hyper Light Drifter was fun for us, as we had more freedom to adapt his moves to our platform fighting mechanics. You can drag your opponent all over the air, by linking up to 3 different types of special air dash attacks (like in this video). His Deflect move was another iconic Hyper Light Drifter move, and it made so much sense to turn it into something similar to Fox’s Shine in Smash. Some in the studio say he is a fast version of Fox + Marth, with better movement options.

Juan from Guacamelee already had all the standard platformer combat moves, with jab combos, directional attacks, air moves, throws, and even directional special moves which you can charge up, just like we do in Brawlout. Because of this, we were able to faithfully reproduce them in 3D, and adjust their timings to balance Juan into a really fun fighter. Plus we added some nice little touches (which involves a certain famous chicken), but you’ll have to wait and see.

COG: Are there plans to incorporate more characters into the game, be they original Brawlout fighters or guests from other indie games, and if so when can we expect them?

BI: Brawlout will launch on Nintendo Switch on December 19 with a starting roster of 8 characters plus 10 character Variants. Variants are alt versions of the character with different stats, outfits and even new moves. With these Variants, Brawlout’s cast numbers 18 individual fighters. Players can find the fighter and Variant that’s right for them and tear it up on the battlefield. Soon after launch, we’ll continue to add new characters every two months, including more amazing guest characters.

Blizzard Reveals More Information on Diablo II: Resurrected
Next Top 10 PlayStation 4 Games to Watch For in 2018
Previous The Top 12 Remakes and Remasters of this Generation