These Games are Awesome and Will Leave Your Head Spinning

Once upon a time, JRPGs used to be completely insane. No, really. There was a period in the 1990s and early 2000s where big-budget studios like Squaresoft suddenly started producing incredibly wild titles. These games generally had top-notch production values, a ton of love poured into them, incredibly striking aesthetics, and stories so odd and unexpected that they stick with people to this day. It’s not hard to make a strange little game nowadays–in fact, much of the indie gaming market relies on that premise–but I’m talking about full-length epics here. These titles made truly weird choices, explored incredibly crazy worlds, and sometimes went on to shake the foundation of the JRPG genre. The modern JRPG market no longer takes so many risks or pushes so many boundaries. I think that’s really sad, so I’d like to go over what made these titles so bizarre and compelling in the first place. Personally, I think the key points are the experimental settings, a willingness to let characters and relationships be flawed and ugly, constant and deliberate blending of magic and technology, Lovecraftian horror vibes, and a total dedication to telling these crazy stories to the end. Of course, each game also has its own strengths, so I’ll touch on those too.

Arranged loosely from most obscure to least, here are 11 JRPGs from the past couple decades that are absolutely insane. Some of them blend genres, some of them do funky stuff with game mechanics, some of them are dedicated to flouting expectations, and some of them have giant robots for no discernable reason. There’s so much to talk about that I had to split this article into 2 parts. Here’s part 1, which covers the first 5 games on the list. Be warned: here be spoilers!

Everyone’s heard of Chrono Trigger, the cult classic JRPG about time travel and putting it all on the line to create a better future, but how many of you have heard of its obscure follow-up? Chrono Cross is a 1999 game developed by Square and is technically a sequel to Trigger. In practice, it’s actually a remake or reimagining of Radical Dreamers, a twist-filled visual novel that focuses on the reincarnations of several Chrono Trigger protagonists. If that sounds too straightforward for this article, don’t worry, because Chrono Cross makes Radical Dreams look positively simple in comparison. The game opens with protagonist Serge tripping into another dimension where he died as a child and things spiral from there. Remember how when Chrono Trigger briefly removed Marle from existence, she was still conscious in some kind of void? Chrono Cross takes that little moment of horror and runs with it.

The heroes in Chrono Trigger removed entire timelines from existence, and now Serge is stuck dealing with the aftermath. Multiple futures are fighting for survival, the titanic Time Devourer is actually Lavos is struggling to undo its defeat, and main antagonist Lynx manages to steal Serge’s body and run off with it about a third of the way through the game. He also makes off with your entire party, but that’s all right, because Chrono Cross has a whopping 45 playable characters, not all of whom can be recruited in a single playthrough. In the end, it turns out that female lead Kid is Schala’s temporal doppelganger/magic clone/what have you, created in a desperate attempt to stop a malfunctioning supercomputer with delusions of godhood and the Time Devourer from consuming all alternate realities. Yeah. It’s kind of a mess, but at least it’s a fun mess. 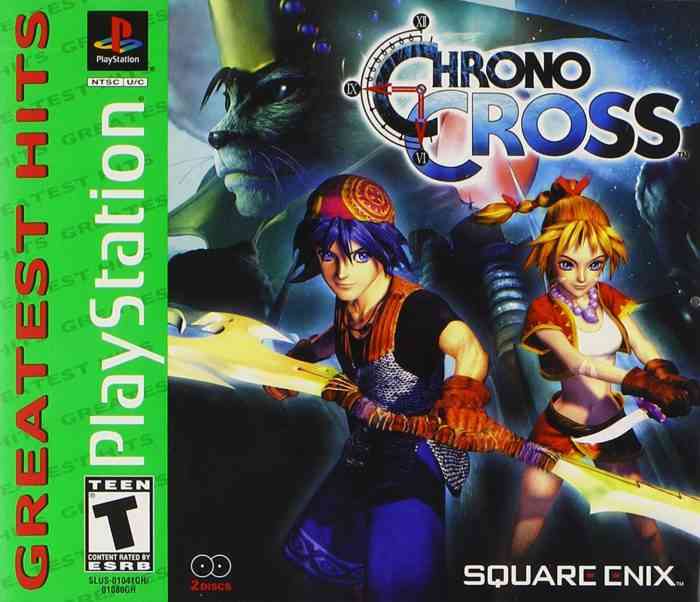 What is it about floating continents that captures the imagination so much? I don’t know, but I’m not complaining. Developed by Monolith Soft and published by Namco, Baten Kaitos brought us some of the best graphics on the GameCube, including lovingly crafted architecture and costumes to lend environments a certain local flavor, and also some beautiful “Wings of the Heart” that change the way the characters move and fight. It’s also a game that incorporates you, the player, into its story, which never fails to make things a little crazy. In Baten Kaitos, you take on the role of a Guardian Spirit, a benevolent force accompanying young antihero Kalas on the hunt for the one who murdered his brother and grandfather. It doesn’t take long for the two of you to stumble into a mysterious girl called Xelha, who wants to stop the local evil empire from capturing the five End Magnus, items containing the power of a long-dead evil god, and using them to take over the world.

Sounds simple enough. Then Kalas is revealed to be an artificial human who’s been tricking you into helping him revive said evil god… and Xelha knew the whole time. Yeah, that’s right, the main player character is a traitor, and the Guardian Spirit would know this if he hadn’t helped wipe their memory at the beginning of the game. What follows is a desperate attempt by Xelha and the player to save Kalas from his own flawed nature. That twist, combined with the game’s overall fantastic visual presentation, is enough to get me on board. 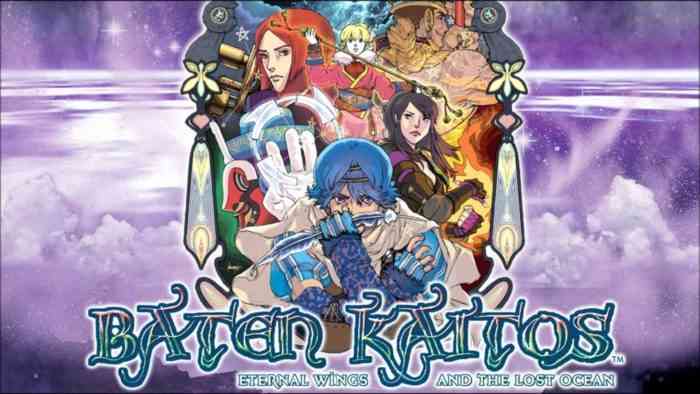 Media Vision and XSEED Games’ Wild ARMs series is pretty weird in general–I mean, come on, a franchise based around desert punk western JRPGs?–but Wild ARMs 3 takes the cake. In the broken, post-apocalyptic world of Filgaea, four Drifters wielding magical guns called ARMs team up in search of a priceless treasure known as the Eternal Sparkle. On the way, they trip over an ancient conspiracy that already ended the world once. But the plot isn’t the real appeal in this game. The main draw is that it feels like a JRPG made by people who’d never played a JRPG before and weren’t familiar with the conventions of the genre.

The hero is Virginia Maxwell, a teenage girl whose naïve optimism is criticized until she comes into her own as the game’s knight in shining armor, magical Indigenous character Gallows Carradine isn’t here to give anyone advice when he’s so busy running away from his own responsibilities, angry loner Jet Enduro is the party member who most needs emotional support, and smart guy bounty hunter Clive Winslett has both the highest attack in the party and a family that doesn’t die. There’s no romantic subplot in the game, you can’t buy healing items, and weapons can only be upgraded and customized, not replaced. There isn’t even a mana points system–instead, a Force Gauge builds as each character attacks, with new magic attacks unlocking at a certain level. Plus, you need to search for items and locations on the world map with a radar-like ping and you can skip random encounters. All in all, Wild ARMs 3 is a title that wanders cheerfully away from the standard JRPG formula and heads off in its own direction, and I respect it for that. 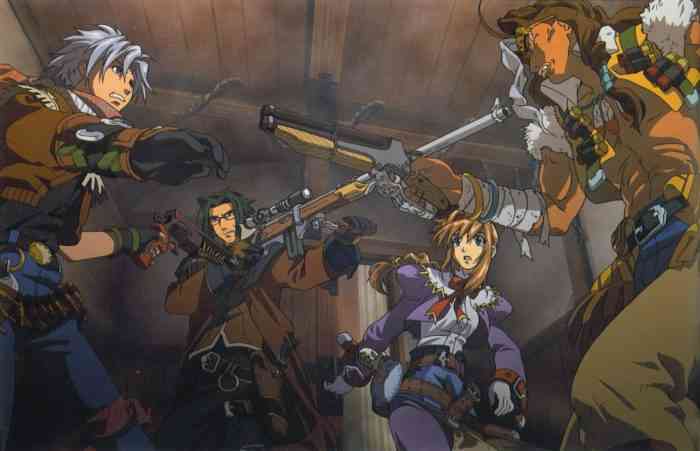 Have you ever looked seriously at an RPG and thought ‘I wish this game had cannibalism as a major gameplay mechanic?’ No? Then you definitely haven’t played Digital Devil Saga. Developed by Atlus in 2004 (with part 2 released in 2005), this spin-off of the Shin Megami Tensei franchise is drenched in Hindu lore and dripping with a fusion of ugly magic and misused technology. The duology of games begins in the Junkyard, a virtual hellscape dominated by six Tribes battling for turf. The Karma Temple, the arbiters of the war, has declared that the last gang standing will have a chance to reach Nirvana, a paradise without war or strife. In the game’s opening sequence, the battle between protagonist Serph’s Emryon Tribe and the nearby Vanguard Tribe is interrupted by the sudden discovery of Sera, a mysterious girl who comes from somewhere outside the Junkyard… and by both sides suddenly transforming into voracious demons. When Serph and company regain their senses, they find themselves in a bloodbath. Fortunately, Sera is still alive, because the Karma Temple has made some new rules: the winning Tribe must present Sera to the Temple, and use their newfound demonic abilities, Atma, to eat the competition. This means everyone is going to be gunning for the Embryon Tribe now. Oh, and the formerly emotionless combatants are suddenly experiencing emotion for the first time. There’s no way that will complicate anything, right?

Pretty intense, right? And that’s only the first half of the story. Digital Devil Saga 2 picks up where the first game left off, but takes the Embryon Tribe to what they know as Nirvana–and we recognize as a post-apocalyptic earth. Turns out that Sera is the only real human in the first game, and the Junkyard was a training sim for combat AI loosely based on people she knew in real life. In this world, the god Brahman lives in the sun, and he’s so fed up with humanity that he’s been turning everyone its rays touch to stone. The only survivors have the power of Atma, meaning they have an alarming tendency to become ravenous demons. Needless to say, things are looking grim. Going over the plot in any more detail would take up an article in itself, so let’s just say that Digital Devil Saga may be the most out-there game on this list–and for that, I love it.

As a general rule, most games lose something in translation. Vagrant Story, which has what may be the best English localization in gaming history, is the exception. This gothic tale is at once smaller-scale than most JRPGs and much, much larger. It takes place within the walls of a single city, but incorporates an elaborate item crafting system, combat inspired by rhythm games, the structure of an 80s dungeon crawler, a story straight out of Greek drama, quasi-Shakespearian dialogue, and the aesthetics of French graphic novels. Oh, and pretty much the entire cast is wearing bondage gear for absolutely no reason, so that’s fun. The story is loosely connected to the world of Ivalice, as shown in Final Fantasy Tactics and Final Fantasy XII, but Vagrant Story is functionally a standalone title, which is good, because being connected to FFXII would only drag it down. The game begins with immortal cult leader Sydney Losstarot kidnapping the young son of powerful Duke Bardorba and fleeing to the cursed city of Leá Monde, where the dead do not rest in peace. Players take on the role of Ashley Riot, Riskbreaker, a one-man army who must infiltrate the city, assassinate Sydney, and retrieve the boy. Unfortunately, a sinister paladin has also arrived in Leá Monde, and he has his own plans for Sydney and Ashley both.

Vagrant Story is one long dungeon, dripping with atmosphere and filled with creepy lore. At times, it comes very close to being a horror game in the vein of classic Castlevania. Especially noteworthy are Ashley’s growing uncertainty if his tragic backstory is even real, the awful truth of what happened in Leá Monde, and the growing realization that Sydney isn’t just a worshipper of The Dark–he’s trying desperately to keep its power out of other, less scrupulous hands. When the unstable cult leader who cut his own arms off as a sacrifice turns out to be trying to save the world, it really puts things in perspective. 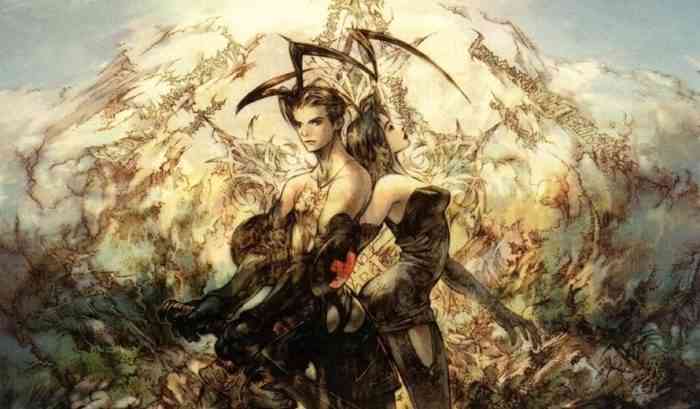 That’s the first half of my list of bizarre classic JRPGs! Stay tuned for Part 2.