There’s an App for That

If there’s one game that everyone knows about right now, it’s Elden Ring. With as many people playing it as it has, there are still secrets and discoveries being made. To keep track of all the locations, NPCs, and quests, someone made an app called Shattered Ring.

A divisive feature of Elden Ring is its UI or lack thereof. The game was designed to not hold your hand; to make the player explore in a natural way, which may be a scary thing in a Soulsborne game. However, if you want to get the most out of your game without losing your mind over objectives, there is an app that may help you. 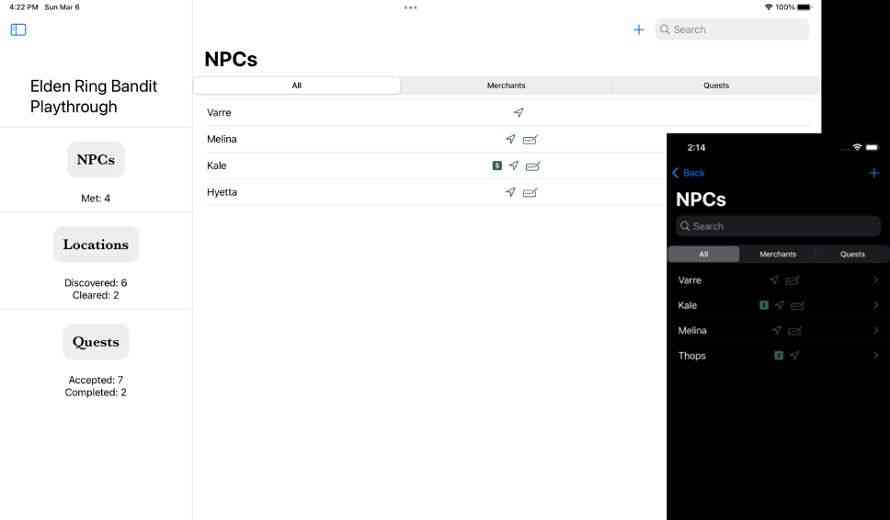 Shattered Ring was made by a fan who felt he would benefit from having quest markers and reminders of objectives. Since there are no such things in Elden Ring, he took it upon himself to make one. Shattered Ring is a rudimentary iOS app, where users can program their own reminders, lists, and quest lines.

You can track NPCs, quests, and locations, and what they all yield in terms of loot and opportunities. Bear in mind, this is not an “Elden Ring” app. These things are not programmed in. Users have to do it themselves. Because of this, you can actually use it for any RPG you want. Hell, you can probably use it for real life.

You can buy Shattered Ring on the App Store for iOS, if you think it will help you conquer the Lands Between. However, if you want to explore without the guidance of technology, that’s fine too. Elden Ring is available for PC, PS4, PS5, Xbox One, and Xbox Series X|S.

Would you use Shattered Ring? Let us know in the comments below.