With all the hype around the release of Halo Infinite, now is the perfect time to make limited edition Halo items. Even jewelers have gotten in on the excitement. Now, Riddell Sports and Xbox have collaborated to make a Master Chief football helmet.

Since Master Chief is the example of peak physicality of a human male, it’s no wonder that athletes may hold him in high regard. Thanks to this collaboration, they can really wear a Master Chief helmet when they play. Only… it doesn’t look exactly like his. 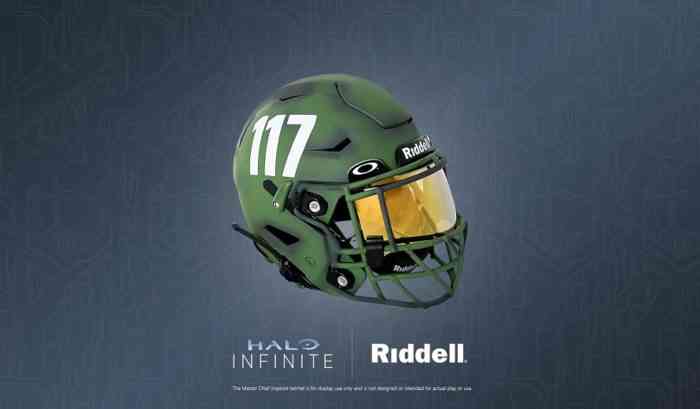 The helmet has the shape of a regular football helmet with the smooth, round surfaces, a face guard, and even a detachable visor. The has the colors of Master Chief’s iconic armor and a big, white 117 plastered on the side. Not exactly the Mjolnir armor Spartans get. It kind of looks like what he would wear in that pre-Xbox build of Halo from 1999.

Follow and RT with #HaloRiddellHelmetSweepstakes for a chance to win one of five awesome commemorative helmets from @RiddellSports and @Oakley!

No football league would let someone play with equipment that was an actual replica, so this is as close as they could make it. The gold visor is a nice touch though. If you’re a sports memorabilia or Halo collector, you might like to have it on your shelf.

As for getting your head in the helmet, fans have a couple of options. There is a sweepstakes giveaway, where five helmets can will be given out to those who retweet the contest. Fans can also purchase the helmet themselves, but only a select quantity is available. However, it is a whopping $999.99. Almost as expensive as Chief’s armor itself.

Halo Infinite is available for PC, Xbox One, and Xbox Series X|S. Play it on Xbox Game Pass.

Would you wear this on the field? Let us know in the comments below.