Not Only Shoes but Customization Too in This 25th-Anniversary Celebration! 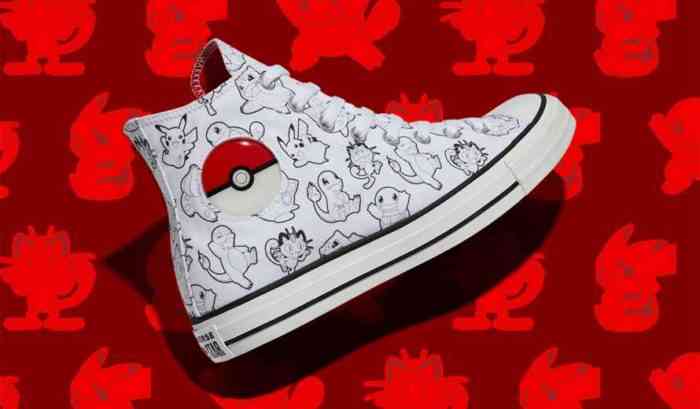 This will premiere in the Kanto region of Japan, where Pokémon trainers originally started their journey. There are seven items that can be purchased, not including the digital customization experience. There is the Chuck Taylor All-Star, which is centered around the classic Converse sneaker, has Bulbasaur, Charmander, Squirtle, and Pikachu on one side, and Jigglypuff on the other on one shoe, while on the other, the classic starter pokemon set is facing off against Meowth. These can be bought in adult, youth, and child sizes. There’s the classic basketball sneaker, Poké Ball Chuck Taylor All Star, as pictured above with a fun domed, squeezable Poké Ball on its sides. There’s, of course, the baby shoe, Easy-On Chuck Taylor All-Star Ox,  featuring Pikachu and Jigglypuff on the shoes.

There are other things Converse is going to come up with too! There is the Celebration Hoodie, complete with tour dates, a Jigglypuff Sherpa-fleece sweater, Pokémon Team and Pikachu T-Shirts (both long sleeve and short-sleeved), a retro-style Pokémon Camp Cap, and Go 2 Backpack. All will carry the Pokémon and Converse logos, whether they’re watermarked, embossed, or stitched in, so you can show off the brand and the franchise with pride.

For those who want the Pokemon shoes to be a little more personalized, it’s possible to do so through the Converse By You program after launch on the Chuck Taylor All-Star and Chuck 70. It’s possible to customize graphics, adding among eight region names on the midsole, among other standard features that are part of the program.

Prices will be starting at about 45 dollars USD, with going higher with customization. Those that are interested in purchasing any of the new Converse collections can find them in select retailers and on Converse.com on December 10th, 2021.

Do you want a pair of Pokémon shoes? Let us know on Facebook or on Twitter, or in the comments below!