Minecraft: Java Edition and Bedrock Edition Are Coming To The Xbox Game Pass For PC

The Xbox Game Pass is a subscription service that allows players to access tons of popular and indie games on Xbox, Cloud and PC. It is clear that the initiative is important to Microsoft, as recently, Back 4 Blood, Destiny expansions and more were added to the service. These are recently released and high quality video games. Fans have also noted their appreciation for the service. It has been announced that Minecraft: Java Version and Minecraft: Bedrock Version will be hitting the service sometime in November. 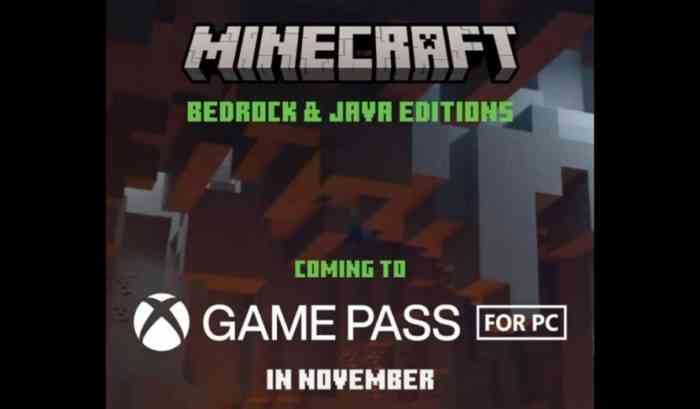 In a cheeky trailer, via Minecraft’s official Twitter, it was announced that both versions would be coming to the Xbox Game Pass for PC. Therefore, the Minecraft PC Bundle gives players access to both editions. This is the first time that these versions have hit Xbox Game Pass for PC, as it was on the console for some time.

In November, players will be able to access the original game in the Java Edition and enjoy different features such as cross play in the Bedrock Edition. Cross play between PC, Linus and Mac OS as well as between Windows 10 and 11 is truly convenient.

Minecraft is a sandbox video game with a storied history since its release in 2011. Suffice to say, it blew up since its launch and is now a mainstay in the video game industry.

The Xbox Game Pass offers three different plans, Ultimate, PC and Console. The Ultimate Edition is a steal for first time subscribers at the cost of $1USD and $14.99USD thereafter. Interested persons can check out the packages here.

What are your thoughts on the Xbox Game Pass? Are you subscribed to the service? Are you excited for Minecraft to hit the platform? Let us know in the comments below or on Twitter and Facebook.


Test Drive Unlimited Solar Crown Has Been Delayed Into 2023