When it comes to indie success stories, there’s very few quite as big as Stardew Valley. First released all the way back in 2016 by Eric ‘ConcernedApe’ Barone, Stardew Valley’s chill farming simulation has amassed a massive fanbase over the years. There’s been an amazing amount of content added to the game through free updates since its launch, but ConcernedApe recently revealed that he’s not sure if there’ll be any more updates. Now, we know why – he’s been working on his own brand-new title Haunted Chocolatier, revealed today with a gameplay trailer.

ConcernedApe’s distinct pixel art style is all over Haunted Chocolatier, a game where you play as… well, a haunted chocolatier. With a cast of colorful characters, cute monsters to fight, and an array of materials to gather for crafting and cooking, there’s certainly plenty of similarities to Stardew Valley. However, with a brand-new start for ConcernedApe, there’s sure to be plenty of creative new features for us to sink our teeth into. 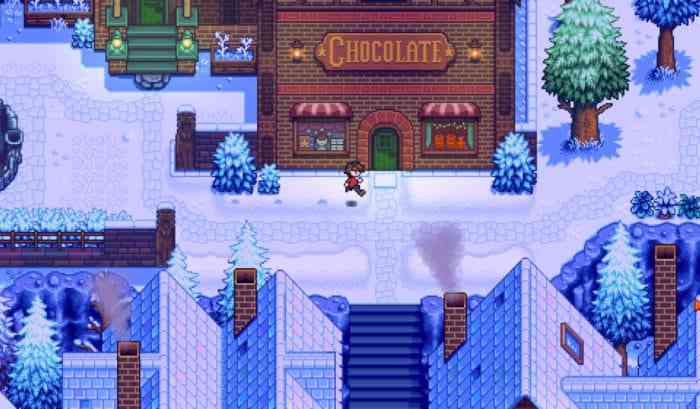 In a blog post announcing the game, ConcernedApe tried to outline what genre the game is in: “Now, you might be scratching your head, wondering exactly what type of game this is. I’m not sure how best to describe it. It’s evolving organically as I develop it, so I’m not sure where it will go. But at its core, the gameplay loop involves gathering ingredients, making chocolate, and running a chocolate shop. Of course, there’s a lot more to the game than that, but I don’t want to get too deep into at this early stage, partly because I don’t want to be tied down to any particular concept of what the game is.”

Although the trailer looks absolutely gorgeous already, Haunted Chocolatier is pretty early in development – according to ConcernedApe, it’s going to be quite a while before the game releases. Although it’s intended to come to major consoles eventually, the only platform that’s 100% confirmed right now is PC.

Coromon Review – A Different Form of Flattery
Next
Head To Paradise In Apex Legends: Escape In Early November
Previous
Check Out a Couple of Classes Coming to Tiny Tina’s Wonderlands