Stay on Your Side!

Yesterday, Stardew Valley developer ConcernedApe AKA Eric Barone tweeted out news with very interesting prospects. No teasing, no cryptic messages, just straight up Stardew Valley splitscreen. That is something that is in store for fans in the Stardew Valley update 1.5. The splitscreen feature will divide the screen over its vertical axis, giving each player their own side. It appears to work like online co-op where players can venture into different parts of the world independent from other players and they share the same pool of money. Of course, that is not the only addition. The screenshot allowed some fans to spy some other stuff as well. 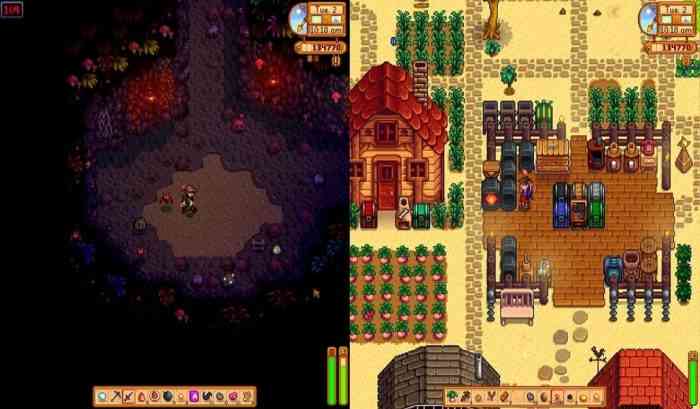 We can see the two players in completely different areas of the game; one is fighting in the mines and the other is tending to the farm. One glaring addition is the option to play on a beach farm, which appears to have sand as the common tile instead of soil. Farming appears to be the same however. Some new items will be introduced as well; you can see a ginger root in the player’s inventory on the left and the right side appears to have new chests. Some uses for other items and craftables can only be speculated on.

As far as the limits of splitscreen, Barone has stated that PC can accommodate up to 4 players, but other consoles can have up to two players per screen, but would not specify which ones if not all of them. It is also unclear if the two screens would merge or not if players wanted to work side by side. It would just seem like a confusing redundancy if it did not. Stardew Valley is out now on PC, Switch, PS4, Xbox One, and mobile platforms.

Would you be taking advantage of splitscreen? Let us know in the comments below.