Players Can Build an Aquarium for New Skyrim Fishing Mechanics

Next month, when The Elder Scrolls V: Skyrim Anniversary Edition comes out, the Dragonborn will have a brand new skill to develop: fishing. 10 years ago, when Skyrim first came out, we were introduced to a game where you could do almost anything, but fishing was not one of those things.

The Dragonborn can fight any way they wish; using bows, axes, swords, magic, daggers, and even with their voice. They can make money in so many ways, like selling armor and weapons, completing quests, and stealing, not to mention all the skills they will unlock along the way. However, one of the most common jobs in the world of The Elder Scrolls was unavailable. 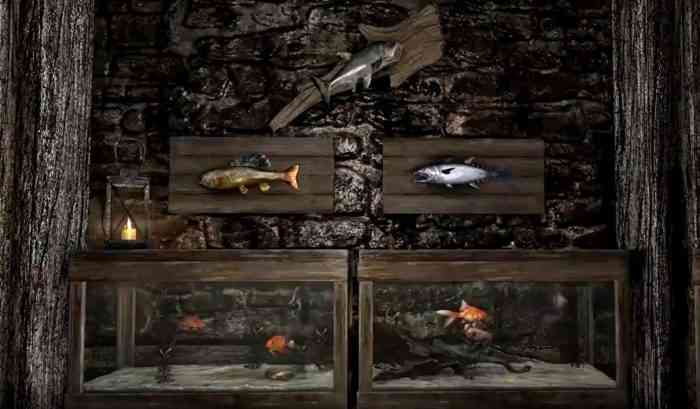 What exactly is fishing going to be like in Skyrim? In the standard edition, players can “harvest” fish from different sources, like drying racks and even right out of the water, but they haven’t exactly been a steady source of income. Plus, who really uses the cooking mechanics of the game? Honestly?

Don’t tap on the glass. They don’t like that…

Add an aquarium to your Hearthfire homes in Skyrim Special/Anniversary Edition on November 11 for all your fresh catches ? #Skyrim10 pic.twitter.com/jAh1vjC5Qm

Well, it appears that players can catch fish and then release them into their own aquarium. Bethesda has released footage of what appears to be the cellar of a house, transformed into an aquarium.

As many players know, the Hearthfire DLC allows players to build and customize several properties around Skyrim. Using different materials and funds, they can add a kitchen, an armory, an alchemist table, and now it appears they can add a little home/cage for their new fishy friends/captives.

The Elder Scrolls V: Skyrim Anniversary Edition will be out on November 11th for PC, PS4, PS5, Xbox One, and Xbox Series X|S.

Will you be trying out the new fishing mechanics? Let us know in the comments below.