Among Us Finally Launches on PlayStation and Xbox

Among Us Finally Launches on PlayStation and Xbox

Innersloth just announced that the popular deception game, Among Us, will be launched digitally on the PS4 and PS5, Xbox One, Xbox Series X|S, and Xbox Game Pass for Console consoles on December fourteenth. This comes as exciting news for long-time players and new, as prior to this, Among Us could be only played on PCs through Epic Games, on Nintendo Switch, and in the mobile gaming stores  Google Play and Apple Mobile. This multi-award-winning game of 2020 of deception, betrayal, and chaotic fun also promises that there will be physical games that may be purchased in the future, staggered due to regional restrictions.

On December 14th, the physical edition of Among Us in the Crewmate edition will hit the shelves in the UK and Europe, while in Japan and Korea will see Among Us copies on December 16th. For those of us in North America and Latin America, we will see the game in the new year on January 11, 2022. We will all be able to purchase digital copies on December 14th, so don’t worry! Everyone will be able to play Among Us before the Holiday season and the new year. However, if you want to keep your eye out for the special editions of Among Us, in both the Impostor Edition and the Ejected Edition, (which will come with all sorts of goodies!) you can pre-order your own copy on the Maximum Store! Or, you can wait until Spring 2022 when it will be tentatively released for various regions, to be announced. 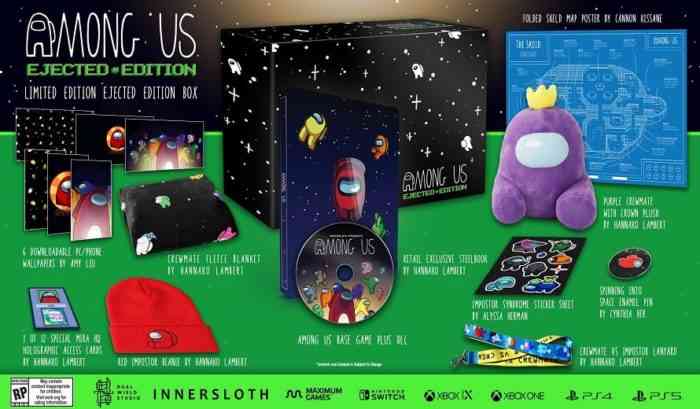 With all copies of the Among Us, there is the promise that there is the ability to Cross-Play, no matter what your gaming console is. This means that while one friend is playing on a PlayStation 4, another can be playing on a Nintendo Switch, and another on their phone! Up to four to fifteen players in one lobby is supported on the online servers.

For those who haven’t played, Among Us is a social game of deception and betrayal where a crew in space attempts to fix the station, and an imposter among them betrays, sabotages, and kills other players. Who will win? There are no guarantees in this game of wits and teamwork!

Have you played this game yet? Does Among Us sound exciting to you? Let us know in the comments below, or find us on Twitter and Facebook!