Of all the games to be announced at the most recent Nintendo Direct, the Final Fantasy kart racer Chocobo GP was probably one of the most unexpected ones. Launching on the Nintendo Switch some time next year, Chocobo GP is certainly set to be a fun romp through some iconic Final Fantasy locations. Recently, game director Akihiko Maeda made an appearance at Square Enix’s weekend-long ‘Square Enix Presents‘ event at the Tokyo Game Show to discuss a few details about the game. 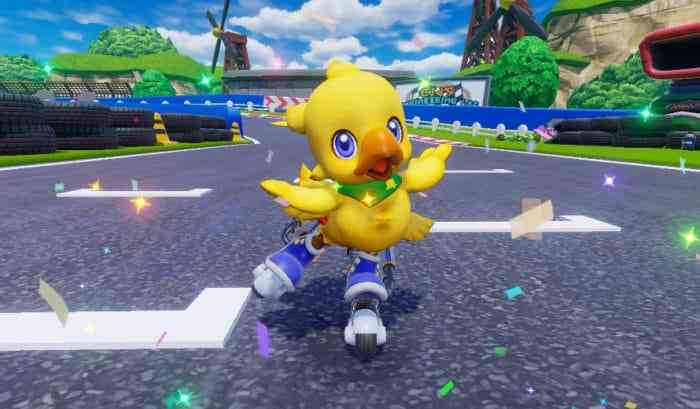 Although Maeda didn’t reveal exactly which Final Fantasy characters will be making it onto the roster, he did give us a number – 20. With a few racers already revealed, from Final Fantasy staples like the chocobo itself and the dimension-hopping swordsman Gilgamesh to fan favorites like Final Fantasy IX’s Vivi and Steiner, that number’s been whittled down a little. It’s probably safe to assume that most of the series will get at least some representation, and we haven’t seen even a single Final Fantasy VII character yet!

However, it’s not all about the racers – we also got a good look at some of the actual mechanics of the game during the event, from the items you’ll be able to pick up along the tracks to character-specific abilities. In place of Mario Kart-style items, Chocobo GP features iconic Final Fantasy spells like Fire, Doom, MBarrier and Aero. Throughout races, players will be able to level up their spells, following the classic Final Fantasy naming convention – for example, Fire levels up to Fira, which in turn levels up to Firaga.

Chocobo GP is set to release on the Nintendo Switch some time in 2022 – although there isn’t much more information on it quite yet, it’s probably safe to assume that there may be announcements on the way for a few other consoles as well!