The Fur Will Fly

Daedalic Entertainment and Chunkybox Games are announcing a new dungeon crawler with a streak of bullet hell and over-the-top body horror in the form of Wildcat Gun Machine. This upcoming title will arm you with a wide variety of guns, a ton of bullets, and a bad attitude before turning you loose in a world full of horrifying flesh monsters that need shooting.

Players will enter twisted dungeons full of formidable opponents and difficult combat puzzles designed to keep enemy encounters streamlined and balanced. This will force you to come up with creative solutions in order to advance–of course, most of them will involve using the game’s different 40 guns.

The announcement trailer shows off a variety of horrifying enemy designs, over-the-top guns, and intimidating, mad science-themed level design. It also features glimpses of high-octane boss fights punctuated by shots of a very real cat crawling through tunnels and jumping away from animated explosions. It’s currently unclear what the live-action segments represent, but they certainly do a good job of establishing the game’s playful tone.

The video promises brutal bullet hell combat, huge and revolting bosses, and character upgrades to go with the guns. And when that is no longer enough, the game will allow you to become the gun by letting your character hop into a series of fancy robots that, as you can probably guess, are absolutely covered in guns. The trailer also suggests that the game will have some roguelike elements since you will likely get killed repeatedly but appear to be able to avenge yourself against the foes that brought you down last time. 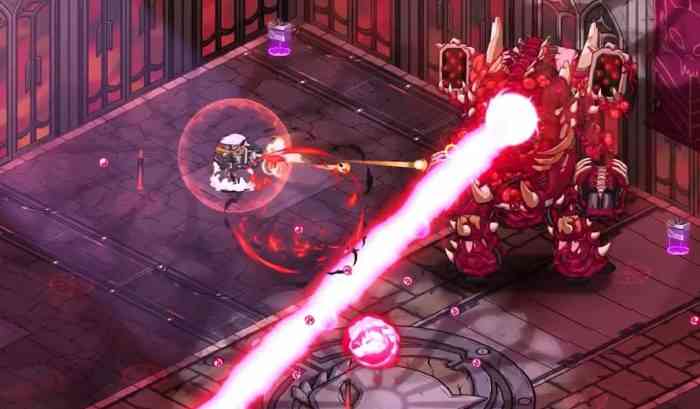 Wildcat Gun Machine will be available for PC, PlayStation 4, Xbox One, and Nintendo Switch in late 2021.

What’s your favorite dungeon crawler? Let us know down in the comments, or hit us up on Twitter or Facebook.