The Appeal of Gungrave’s Zombie Protagonist

Today on COG Considers, let’s talk about the uncanny hero of the zombie/crime drama shooter franchise known as Gungrave. It’s not exactly a new thing to make zombies the heroes of their own stories–Left 4 Dead has had playable infected for ages and Stubbs the Zombie in Rebel Without a Pulse had players lead a zombie army to brain-hungry victory–but Gungrave’s protagonist gives it a Frankensteinian twist. Unlike most playable zombies, the aptly named Beyond the Grave isn’t infectious, was revived by forbidden science rather than dark magic, and his main character trait is his literally undying willpower. He has no particular interest in brains, but nothing can stop him from pursuing his twin motives: to avenge his own death and to protect mob princess Mika Asagi, who is being hunted by the same people who murdered Grave. 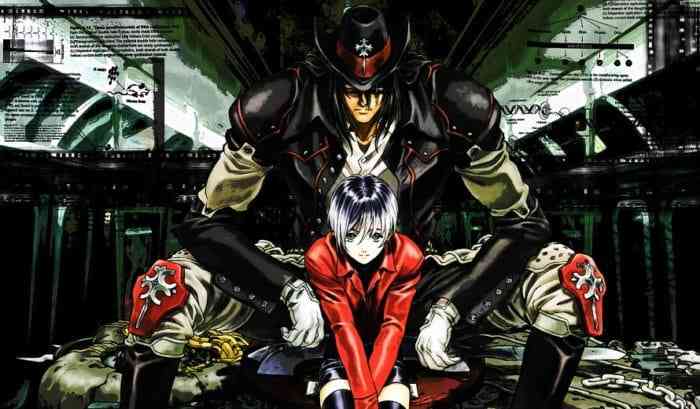 Okay, so that’s a pretty solid core motivation, but this is only the beginning of what makes Grave tick. When he was alive, he was a skilled mob hitman named Brandon Heat who served Mika’s father loyally. However, when Brandon discovered his best friend Harry was planning to betray Mika’s dad and take over the crime syndicate they both worked for, he was faced with a horrible choice: betray his boss or betray his best friend. Brandon was unable to make the choice, which led to him being brutally gunned down by Harry. Over a decade later a brilliant scientist resurrected him as an undead superweapon and renamed him Beyond the Grave, but over the course of the first game, it becomes clear that Grave is no longer the man he used to be.

Some games use a silent protagonist to help the player get immersed in the world. Gungrave uses its silent protagonist to subtly convey to the player that Grave almost certainly came back wrong during his resurrection. Despite his motives being unambiguously heroic, both the story and gameplay of Gungrave treat him like an unstoppable monster, and his complete silence–not even grunting when hit–only adds to the concerning implications. His over-the-top character design, which combines a cowboy hat, glasses with a lens blacked out to cover his missing eye, and a coffin-shaped mobile weapons platform also serve to divorce him from the more subdued and realistic characters around him. He may be human-shaped, but he is no longer human.

All in all, this puts Grave squarely in the revenant category of zombie–someone with so much unfinished business that not even death can stop them–which hooks in surprisingly well with Gungrave’s crime drama storyline. While the anime adaptation adds its own weight with Grave struggling to reclaim his past identity, I tend to prefer the games’ version of the story, where Grave instead leaves his past behind and shows no particular desire to become human again even if it were possible. The concept of struggling to move on with your existence even after having everything stripped from you, including your very humanity, is quite compelling.

With Gungrave G.O.R.E scheduled for 2022, it looks like Grave will soon be making his return. I for one am looking forward to seeing where this dead man walking’s undying loyalty takes him next.

Call of Duty: Vanguard Cheaters Spotted Less Than 48 Hours Into Beta
Next
Doja Cat Is Apparently Going to Be Added to House Party
Previous
Fall Guys “No Teams” Playlist Lets You Compete Solo